Slasher Studios is at it again. 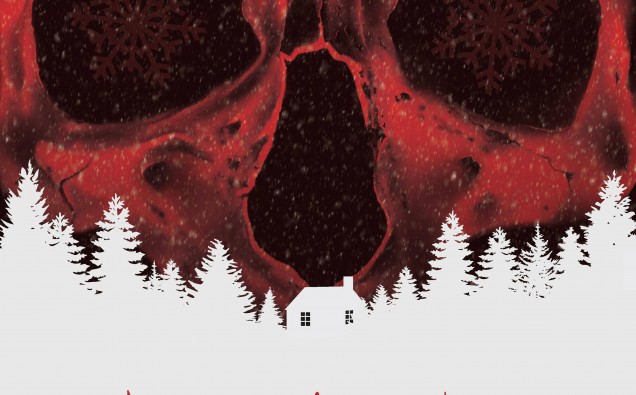 After penning the fun slasher film homage known as Don’t Go to the Reunion, Slasher Studios brings us an all-new slasher film known as Dismembering Christmas. The folks over at Slasher Studios launched a Kickstarter campaign last summer and reached their goal of $10,000 before raising some additional funds on Indiegogo. Originally intended to be directed by co-writer Steve Goltz, who unfortunately ended up having to bail due to scheduling issues, Austin Bosley (who stars in the film as Travis) stepped in and made his feature-length directorial debut…and for a first-time director, he certainly did a nice job.

The film follows three guys and five gals in a beautiful vacation home. And as the title would suggest, it’s Christmas time and the bodies begin piling up one by one. The story really begins to develop when the group meets not just one, but two pretty sketchy people outside at different times before discovering that a series of murders occurred at the very vacation home in which they’re staying. From the opening scene until we reach the end credits, there never really is a boring moment, and luckily the death sequences don’t take place all at once and the time spent in between them only adds to the fun. 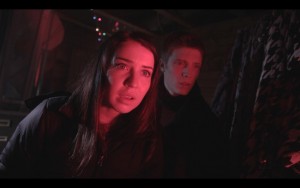 A blend of Christmas-y music score and a beautiful vacation home combine to really put the viewer in the Christmas spirit…especially considering the fact that there’s snow all over the freakin’ place. The Christmas feel was also enhanced with lots of beautiful lighting throughout (kinda looks like Bob Clark’s Black Christmas), and the characters are all decked out in Christmas-y attire. As for the characters themselves, they’re definitely all pretty likeable (which is pretty rare for a slasher film). This is one of the only films I’ve seen in the past few years where I actually found myself rooting for the characters to survive.

The kill scenes are pretty original and creative. Although this film didn’t have any totally blatant homages to any slasher films I can think of, there was one death scene in particular that seemed like it was intended to throw us back to another Christmas-themed slasher film. (I won’t say which one, but if you see it, you’ll probably know what I’m speaking of) As for the killer itself, I really dug the creepy old hag mask (this was more than likely a nod to Curtains), though I personally thought the actual costume could have maybe been a bit more creepy.

The acting was solid for the most part, and every cast member seemed to really embrace his or her role. If you’ve seen Don’t Go to the Reunion, you’re probably already aware of the awesomeness that Johnathan Krautkramer and Marla Van Lanen have to offer. But the Slasher Studios newcomers were also great, with Leah Wiseman’s performance coming to mind as the clear-cut best. For some reason I don’t remember taking note of her in the stills or the trailer, so her amazing performance was quite the pleasant surprise. 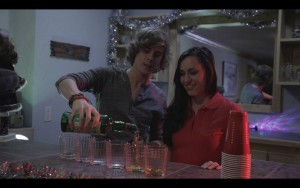 My only complaint with the film is that the ending is pretty predictable. To be honest, the second a particular character was introduced, I had a really good feeling about who was behind the murders and how the backstory would tie in with all the murders. A few characters seem pretty suspicious throughout, which kinda keeps you guessing, but as the film goes on, the way everything is gonna play out becomes more and more evident. Without giving anything away, I’ll say it also wasn’t really too hard to predict the character or characters who survive(s). This is just a minor complaint considering as with most who-dun-its, the options are pretty limited anyway.

Overall, this was a hell of a fun horror film and I can’t wait to see what else the folks over at Slasher Studios have in store for years to come. While this film isn’t necessarily some epic groundbreaking, game-changing horror film, if you’re looking for a super fun Christmas-themed slasher film featuring a lot of imaginative kill scenes that was made with a lot of heart, this film will undoubtedly be your cup of tea. I was originally thinking 3.5 out of 5 knives on the rating scale, but it’s been a long time since I’ve had this much fun with a film, and I can’t believe how much I loved the characters. If you’re a slasher film fan, you’re probably gonna want to pick this one up on DVD or Blu-ray. I believe it will be available at the official Slasher Studios website on October 13th.