An indie horror film where effort pays off. 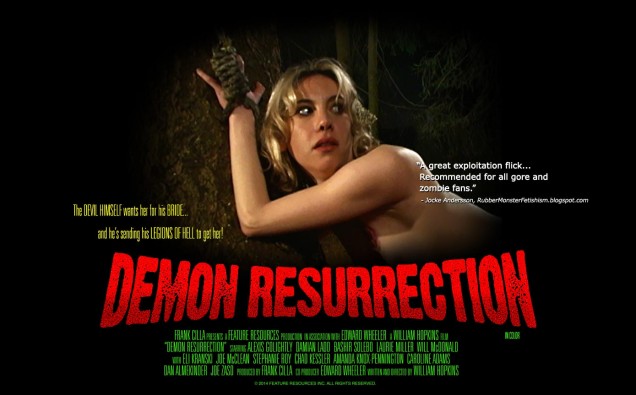 You will not find bigger supporters of indie horror than at theblood-shed.com. But let’s call a spade a spade. Just like with big budget movies, sometimes people just don’t try. Unfortunately, with indie, when this happens the results are spectacular in their suckitude where as with a big budget movie you might at least be entertained by the stupid million dollar cgi shit. Luckily, this is not the case with Demon Resurrection. An imperfect movie that nonetheless rises above so much refuse that clutters the horror genre, you can tell that this is a project of passion.

The plot follows a group of friends gathered to give their friend an intervention at a cabin in the woods. Actually, exactly the same starting premise as the Evil Dead remake but a few years prior. But what they think is a drug addiction problem is much worse: she has been impregnated with the child of the devil by an evil cult. And the bad news just keeps coming because daddy wants to meet his kid and sends a horde of zombies after the group when they resist.

As mentioned, this is not the greatest movie. Some of the pacing is off, some of the acting is subpar, and there are some amateurish cgi fx. So, what makes it good? Well, it’s got an original plot, a real retro feel to it, a killer  (and truly creepy) soundtrack, and where the cgi fails, the practical effects pick up the slack. When it comes to films like this, one can find themselves on the fence. But what you have to do is sit back and ask yourself one very simple question: “Was I entertained?” And the answer is a definitive yes! At no point was I bored, at no point did I just want to give up on the film and turn it off. It was a solid, good use of an hour and a half of my life. What more can you ask for? So, if you have a hankering for an obscure, retro exploitation film, you can do a helluva lot worse than Demon Resurrection.