From the writers of The Ward. 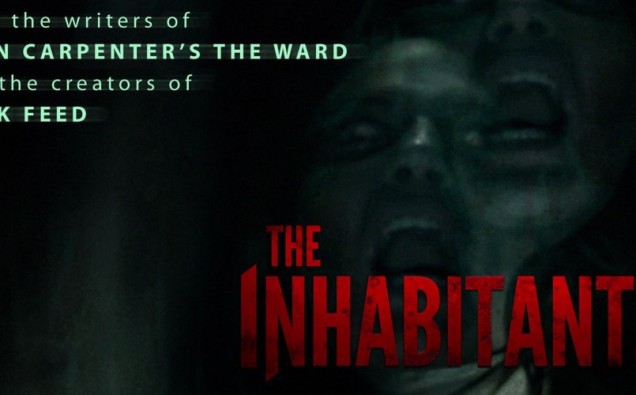 Written and directed by: The Sinister Siblings, Shawn & Michael Rasmussen

The Inhabitants is a film that will be releasing sometime this week. The filmmakers were kind enough to send a screener to TheBlood-shed for us to review. Before Johnny Macabre sent me the screener link, I hadn’t heard much about this at all. I knew it was from the ‘Sinister Siblings,’ who co-wrote John Carpenter’s The Ward, but for all I knew, this was some sci-fi creature feature that took place on an island. This is actually quite the opposite, however; the story follows an attractive-looking young couple who buys an old bed and breakfast. And obviously, with this being a horror film, you already know that some strange things are gonna start happening from there.

The story progresses rather slowly as the film goes on, with the dialogue between the characters that takes place early on serving as a way to foreshadow some of the events that occur later on. The film is sometimes quiet for extended periods of time, with no dialogue (just music and sound), which may not work for everyone, but it definitely helps build the suspense. You could call this a slow burner, but at least with this, we have a film that actually takes some time to develop its characters and the story.

This film isn’t lacking negative aspects, however. My biggest complaint is that it doesn’t offer anything new. You know how seemingly every supernatural film consists of the same components? Like for instance, a family or a couple, some kind of house or building, creepy old women doing weird shit for basically no reason at all, mysterious phone calls, obnoxious loud noises, and doors creaking or slamming. This film serves as a reminder that frankly, we’ve seen enough of those things, and that sadly, those things will probably never go away. At least to this film’s credit, there weren’t as many jump scares as we’ve become accustomed to.

The Inhabitants isn’t a particularly bad film, though it’s not too great either. The film does a decent job of building suspense, but it fails in terms of offering anything new. If you’re expecting a fast-paced thrill ride with scare scene after scare scene, this definitely isn’t the place to look. If supernatural films totally scare the s*** out of you, you may wanna check this out. Otherwise, you’ll probably wanna skip this one.