On a dark and stormy night, I decided to get comfy on the couch, craft beer in hand, kitty on lap, and reintroduce myself to the 1983 Backwoods Slasher,... 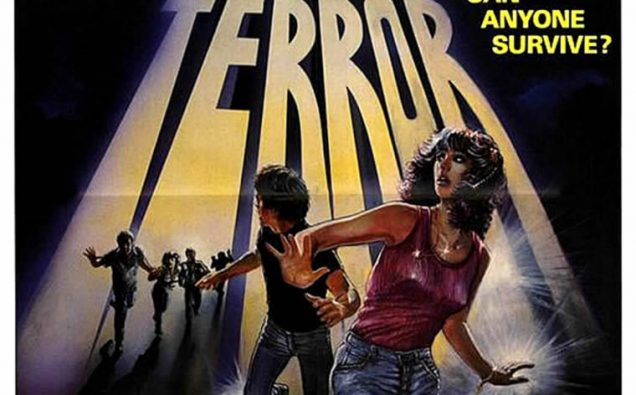 On a dark and stormy night, I decided to get comfy on the couch, craft beer in hand, kitty on lap, and reintroduce myself to the 1983 Backwoods Slasher, The Final Terror.  Thanks to my very good friend Jamie Marino, I’m now the proud owner of Scream Factory‘s Blu Ray DVD resurrection of this often forgotten sub genre masterpiece.

The film, opens with a tasty little tidbit of information.

Unfortunately all of the original film elements for The Final Terror – the negative, the inter-positive – are all lost.  Scream Factory went through six film prints, lent to us by film collectors, to find the best looking reels to do the transfer you are about to watch.  We hope you enjoy this presentation.

Special thanks to Lee Shoquist and Joshua Gravel.

When I read the ‘disclaimer’ concerning damages among reels, etc., I assumed picture and sound quality would’ve suffered to some degree.  This is not really so.  Only a few instances where some discrepancies in various qualities and colors were noticeable, lending an overall impressive transfer.

Getting down to business quickly like any good Slasher should, two young adults are promptly dispatched.  The female suffering death by aluminum can lid booby trap, which I fondly remember from childhood viewings.  The opening scene of The Final Terror making a lasting impression upon this future Horror Nerd. 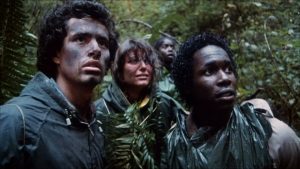 The Final Terror follows the forestry work of a Community Youth Group and their counselors, including Eggar, the dirty, disturbing, and angry little fellow portrayed by Pantoliano.  The seven juveniles and staff members make their way deep into the woods, to an area known as Mill Creek.  Passing a mental institution on the way to the destination, Eggar pleads with the bunch to not attempt the trek to Mill Creek, stating it’s dangerous in more ways than one.  True to Slasher form, no one gives a fuck about what Eggar’s is saying.

The first night camping in the dense forest, three of the boys, city kid Marco ( Adrian Zmed ) psychopathic Zorich ( John Friedrich ) and comedian Hines ( Ernest Harden Jr. ) set out to locate a crop of marijuana.  After setting the terms and conditions of the partnership between the group, Marco is left to stand as look out. 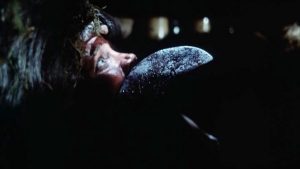 The collection of intermingled campers is separated because of the Doja detour, and now begins the terror for the isolated bunch.  Hines and Zorich find a lonesome shack in the woods, stolen items from their camp and women’s clothes litter the shanty, eviscerated animal carcasses and low and behold…….magic mushrooms!  Thinking they found proof that Eggars is one sick sonofabitch, they race back to the others to share what they found.  To the extreme displeasure though of their camping companions, they reveal they played a prank on Marco, causing him become lost within the relatively uncharted woods, and now they must initiate a search party to help find him.  Of course during this search and rescue mission, is a rather hot outdoors sex session amongst the counselors, and yes, it is put to rest in traditional Slasher fashion.

Marco eventually finds his way back, with a backpack full of pot but is quickly followed by one of the females finding Counselor Mikes butchered remains in the outhouse.  The enjoyable pacing, uber creepy and camouflaged killer, great acting, location, script, and camerawork all combined to make this, The Final Terror a mainstay within the Slashers.  The film never ever tried to bite off more than it could chew, utilizing what it did have, in a fantastic and fun fashion. 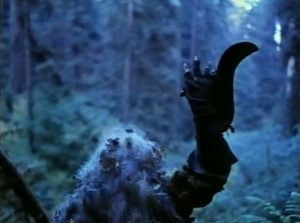 With the juvenile delinquents attempting an early morning raid upon the shanty of slaughter within the woods, and it being unsuccessful, the group agrees to just try to get the fuck out of Dodge.  The teens float down river in a raft snatched up from beside the shack, with almost a false sense of security, that they have outwitted and outrun the elusive and unseen murderer in the woods.  They are of course sadly mistaken, and in a mighty fucked up way, the killer reminds them of this, by throwing a ‘present’ in the raft from a hiding spot.

The young group, after numerous close calls with the psycho, and friends being picked off in front of them, decide to make one last stand in the wilderness, complete with epic swinging death log.  Just watch it!  Re watching The Final Terror rekindled my fierce love for this picture, and I am so thankful my buddy bestowed this bloody gift upon me.  I expect myself to now re visit this one regularly, like an old trusted friend.