Now updated with official video of their panel discussion. 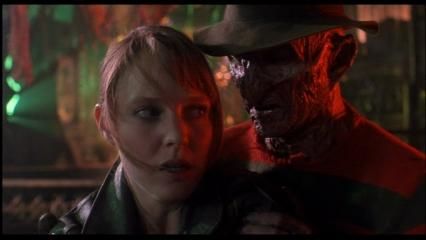 UPDATE: This article was originally written in Nov of 2017. It has been updated at the end with the official video of Robert Englund and Lisa Wilcox’s panel from Rhode Island Comic Con 2017.

Robert Englund and Lisa Wilcox got together this weekend at the Rhode Island Comic Con for a A Nightmare On Elm Street 4 and 5 reunion. As a part of the festivities, as always, there was an amazing panel with the two.

It was standing room only as the A Nightmare On Elm Street panel took place in the massive “Ballroom A” auditorium of the Rhode Island Convention Center. People were lined up for an hour before hand to make sure they got a seat for this rare event. Inside the room, several Freddy cosplayers, both male and female, could be seen in almost every aisle of lined up seats. Even as people were still getting situated in their seats, the top of the hour struck, and it was time for the panel to begin.

Both of the stars were introduced to the crowd to thunderous applause, with Englund looking as dapper as always and playing up to the crowd. The first question is for Englund and it’s a good one. We’re getting right into it. “How do you take a character like Freddy Krueger from the page and bring him to life?” Englund said that he didn’t initially have an idea on how to play Freddy. ‘I didn’t have an idea in my minds eye ‘ I believe was the exact quote. It wasn’t until he was with make up artist David Miller in his garage in a barber’s chair fooling around with Freddy’s make up, before he really got the idea on what he felt should be the Freddy character. Robert was getting tired of the whole process, being poked with brushes, chop sticks, and ‘whatever the hell he had’ that at one point David went to do something and Robert, not even on purpose changing his voice to the now iconic Freddy Krueger voice, said “God damn it!” It was at that point that Robert knew he could not only play the character but exactly what/who the character should be.

Robert then tells a story about how he was able to channel his inner Freddy. One day while getting ready for filming, he is sitting in the make up chair, hot as hell, getting “prodded”, he looked over and saw the ‘beautiful’ Heather Langenkamp and the ‘handsome’ Johnny Depp, sitting in their chairs with little plastic fans to keep cool. He said he became jealous. They got to sit all comfortable, with little make up, and here he is going through all this work to become Freddy. He used that for Freddy. This anger at the youthful, beautiful people would flow through Freddy perfectly.

The next question was for Lisa Wilcox: “What was it like for you to come into the franchise?” Lisa first states that she is a huge fan of horror and was a can of the Nightmare series up until that point, so she was ecstatic to book a role in Nightmare 4 and the Nightmare 5. As she said that, you could see her bouncing in her chair as she tells the story, she seems to still be excited to this day to be a part of the Nightmare series.

Lisa and Robert both praised the writing of Brian Helgeland on Nightmare 4, both for Freddy’s lines and the transition of Alice throughout the movie. Robert also stated that every one of Freddy’s zingers (from all the films) are all written by the writers, none were ad libbed by him and the writter’s deserve all the credit for them.

Both actors were then asked what their favorite roles were. Of course they both named their Nightmare roles. Lisa mentions the transition of Alice from Nightmare 4 to Nightmare 5 was wonderful and that there aren’t many actresses get to show so much range for one character over the two films. Robert mentions that Nightmare 4 was his favorite Nightmare to make because he was left alone and got to do everything as he wanted.

Another little tidbit I picked up from the panel which I found fascinating is that the original A Nightmare On Elm Street was filmed at the same studio as I Love Lucy. And as Robert said “and we’re making our dirty little horror movie here”.

As the panel came to an end, both actors were asked about their upcoming projects. Englund said he has a video game coming out, Injustice 2, which he voices the Scarecrow. and that he recently completed such projects as Nightworld with Jason London and The Midnight Man. Also a “puppet movie” Abruptio, which will explore whether “puppets can be scary, or violent.”

Lisa Wilcox will be appearing in a true crime film set in the 1940s entitled The Mansfield Killings. She will also appear in an Independence Day-esque movie called Kecksburg, which she’s excited about to “be one of the bad guys for once!”

It was a wonder panel with some fun information and great stories from Robert and Lisa.

For more info on Rhode Island Comic Con (The Biggest Show In The Smallest State) please click on the logo below.