Many of the Halloween customs we have today are linked to this ancient tradition. 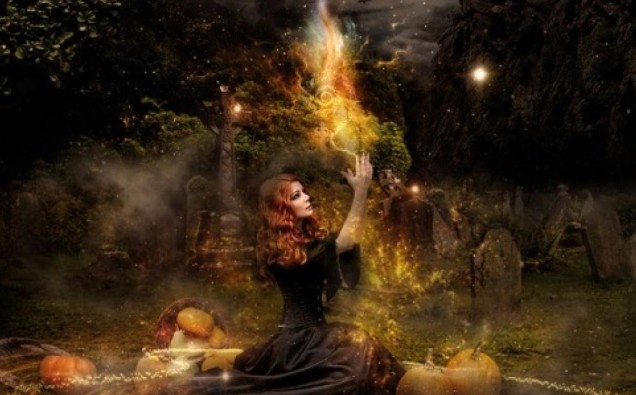 Many of our Halloween traditions have their roots in an ancient Celtic holiday called Samhain. Celebrated on October 31st, halfway between the Autumn Equinox and the Winter Solstice, it marked the end of the harvest season and the beginning of winter. 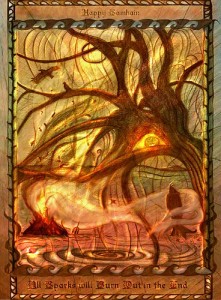 It was believed that the veil between this world and the Afterlife was at its thinnest on Samhain. The Aos Si (spirits or fairies) needed to be propitiated with offerings, often of seasonal treats like apples or nuts. Also, on Samhain the dead could return, and many people set places at their tables for deceased relatives. Sometimes a west-facing window would be left open and a candle lit in it, to help guide the spirit to its family.

Mumming or guising, which involved dressing up in costumes and masks, were popular pursuits on Samhain. The costumes may have been to imitate the Aos Si, or to hide from them. The costumed revelers would walk through the streets, stopping at houses and demanding food in exchange for a rhyme or a song. Pranks were played at the homes of those who declined to share their food. Mummers often carried turnips carved to look like goblins’ heads, with candles inside to illuminate their way through the night.

Numerous divination rituals are associated with Samhain, since it was the time of year when the spirits were closest. Young women would peel apples, then toss the strip of peel over their shoulder. The shape of the peel represented the first initial of the man they would marry. People roasted nuts in a fire and looked for clues to what the future would bring; for example, if two nuts placed in the fire together stayed that way, then you and your spouse would stay together.

Bonfires were an important part of most Samhain celebrations. Often two bonfires were lit and people would walk between them to bring themselves good fortune in the coming winter. Another common practice was to douse the fire in one’s hearth and re-light it with a branch lit from the communal bonfire. 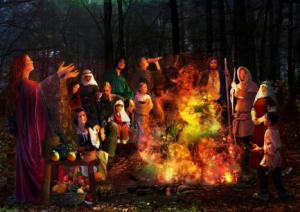 So many of our contemporary Halloween customs are rooted in the ancient pagan holiday of Samhain. Over time, the holiday has become secularized and commercialized, but it remains a link to some very old traditions.