Santa Slasher ‘All Through the House’ available in time for Christmas

On Sunday, October 30th at 2:00pm meet the cast and crew at the Blu-ray signing at Dark Delicacies in Burbank. 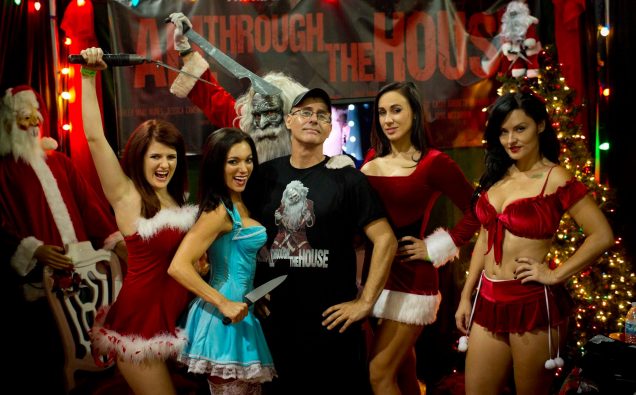 Last year at ScareLA I had the pleasure of meeting some of the cast and crew from the slasher film “All Through the House”. A deranged masked Santa slayer comes to town for some yuletide-terror, leaving behind a bloody trail of mutilated bodies. Sound like your kind of horror movie? Well you’re in luck. Prepare to unwrap some Christmas fear this Halloween. On Sunday, October 30th at 2:00pm the cast and crew from the Santa slasher will be doing a Blu-ray signing at Dark Delicacies in Burbank. The Christmas-themed horror film “All Through the House” made its U.S. debut on all major VOD platforms October 4, 2016 and is released by Gravitas Ventures. 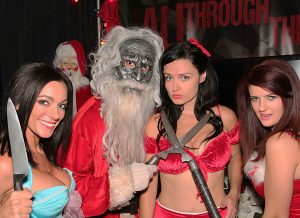 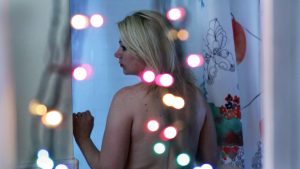 So what is it about? Fifteen years ago, a peaceful Christmas neighborhood was engulfed by fear, when five-year-old Jamie Garrett was mysteriously taken from her bedroom never to be seen again. Now, on Christmas break, Rachel Kimmel comes home from college to find her neighborhood struck again by a reign of terror. A violent killer is hiding behind a grisly Santa mask, leaving a bloody trail of slaughtered women and castrated men to the steps of the Garrett house. Rachel finds herself in a horrifying nightmare as she discovers the twisted secret behind the mask.

Your LA Zombie Girl got a chance to do an interview with the writer and director of the movie, Todd Nunes. Here’s what I found out:

Los Angeles Zombie Girl: “All Through the House” is an 80’s style horror flick. Why the 80’s?

Todd Nunes: “I was first introduced to horror movies and scary things in the 1980s. “Halloween” made a huge impact on me because it absolutely horrified me but in a fun way. I also like the 80’s because horror moves were fun back then and there was no torture. In the 80’s, the idea was to give people a quick scare, put them on the edge of their seats, and deliver a quick laugh afterwards so audiences know they’re safe.”

ZG: Todd, I see that you are the writer and director. How many films have you done and is this your debut in either writing or directing?

TN: “I’ve written dozens of screenplays and directed many short films, but this is my first fully completed feature.”

ZG: What made you decide to go with a Christmas-themed horror movie?

TN: “I love Christmas and I’ve always found that there is something creepy about the mythology of Santa Claus. Children know that the people they trust the most, their parents, are outright lying to them about Santa. It can’t possibly be true. A strange old man whose face is always obscured, creeps into a child’s house at night to watch them sleep? Creepy! A lot of Christmas festivities take place at night, so I always thought there was a scary element to the season that could be explored. Plus, it’s one of my favorite holidays and I wanted to do a mash-up with my other favorite holiday, Halloween.”

“All Through the House” was shot in 21 days in the summer of 2014 in Los Angeles, San Francisco, and Lake Arrowhead, CA. Director/Writer Todd Nunes is currently at work on his next horror film Death Ward 13, a remake of the cult classic Don’t Look in the Basement.

Thanks Todd, and good luck with the movie!!  There is a creature stirring!!!. 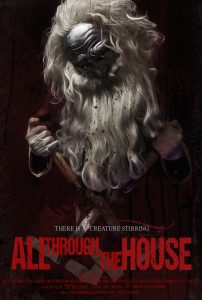 The Christmas-themed horror film ALL THROUGH THE HOUSE made its U.S. debut on all major VOD platforms October 4, 2016 and is released by Gravitas Ventures. VOD Platforms include: iTunes, Vudu, Google Play, Playstation 4, Amazon Instant Video, and Microsoft Xbox. The DVD/Blu-ray version is available on Amazon.

For more information about the movie go to:www.allthroughthehousemovie.com
or find them on Facebook- All Through the House – Facebook