"They always end horror movies in daylight, it's a sign of hope." 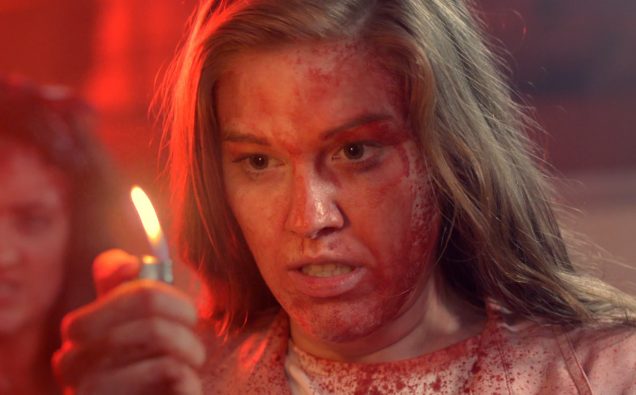 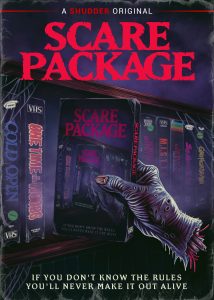 With an abundance of splatter for your Halloween enjoyment- Shudder and RLJE brings us the exceptionally gory horror anthology Scare Package. For fans of a genre movie that is about as meta as it can get, (think Scream or The Cabin in the Woods) subverts just about every horror trope out there and makes you laugh out loud from its sheer horror audacity- well you are going wax nostalgic and be very happy campers indeed.

At the beginning of its life- the horror streaming service Shudder was all about the lowest of low-budget horror. Now that they have built a reputation, they are cranking out their own films like crazy. Scare Package is one of those films and the horror anthology pays homage to practically every b-horror movie ever made. From corny characters in ridiculous scenarios to grisly and creative gore, this horror-comedy has it all.

Beginning with a super meta cold opening entitled, of course, Cold Open, we follow a guy named Mike Myers (no, I’m not kidding) who is apparently the instigator for every bad thing that happens in horror films, even though he doesn’t even like horror movies because they give him nightmares. 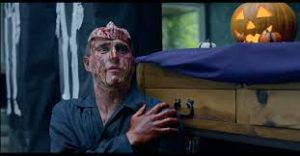 Mike is the one who places the satanic items in the attic, switches the signs so you drive down the wrong road, curses the dolls, and well you get the point. The problem is that Mike is tired of what he considers an uninspired job. He wants a more meaningful life, a bigger role in the horror genre. Ripping up one of the instruction sheets, he decides to go rogue and become a larger character in the segment. Things don’t go as planned and a gallon of blood later, he is taken down. 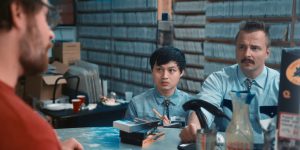 Moving on we meet our main dude and the wrap-around story for the film. Rad Chad has a video store and is a huge fan of Joe Bob Briggs and horror in general. After hiring a new employee, he puts him through all kinds of weird initiations to see if he deserves to work there. We will pop back to Rad Chad’s Horror Emporium from time to time in between segments since the movies he plays are the ones we watch. Having worked at the famous Tower Records back in the day, Rad Chad’s brought back so many cool memories for me.

Each one of the short films gives a meta nod to a different genre of horror and they are all a lot of fun. As is normal with anthologies, some segments are stronger than others. But honestly, if taken for what they are; self-aware, blood-soaked, and funny, they all work perfectly together. 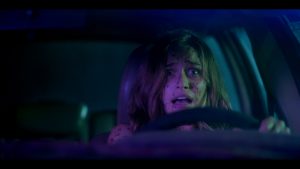 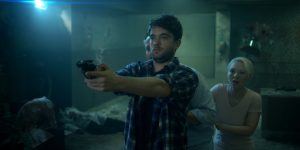 M.I.S.T.E.R takes a clever look at toxic masculinity in our world, along with witchcraft and werewolves, employing a terrific surprise ending. Girls Night Out of Body’s girly slumber party from hell uses colorful lighting and a fluorescent skull lollipop to transform our unsuspecting girls into monsters. All you have to do is tell someone not to touch something and it guarantees that it will not only get touched but stolen. 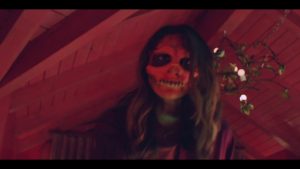 The Night He Came Back Again! Part lV: The Final Kill explores the classic trope of “the serial killer that cannot be killed”, to the extreme. When some teens attempt to kill a supernatural monster after they capture him, well things get pretty insane. Can he be killed? Sorry, you’ll have to watch it to see. So Much To Do deals with murder, possession, and the anger some people feel over their favorite TV shows being spoiled for them. 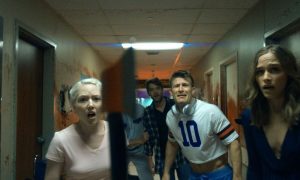 The final segment is Horror Hypothesis. Tying all the other segments together, including Rad Chad’s Horror Emporium, it makes fun of horror and yet shows the true love of it too. Similar in ways to The Cabin in The Woods, we see behind the scenes of a horror film and how the characters are manipulated. The jock, the stoner, the slut, the virgin, the final girl, the know-it-all, security guards not paying attention to their screens, and of course an evil unkillable demon are all represented. Scientists have apparently been examining the reason people make the stupid choices they do in horror films and are writing the scripts for the hapless victims.

Scare Package is a dark yet extraordinarily meta and goofy romp, that demonstrates a pure adoration of the horror genre. I’m sure each viewer will notice different references, depending on what their favorite genre films are, which makes this a perfect movie for a group viewing. 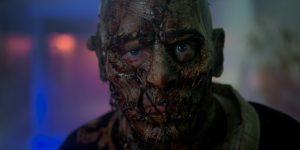 Horror comedy is a difficult thing to pull off, but the jokes here are many, and genuinely of the laugh-out-loud type. The practical SFX were so inspired and well-done- I loved every disgusting moment.

Don’t try to take anything in this film seriously, just jump in with both feet, expect to feel nauseated at times, and have some bloody fun. Heads explode, victims get beaten to death with their own legs, werewolves get killed with chocolate, (dogs can’t eat chocolate, right?) a guy gets impaled in the head with his own arm bone, monsters get stuffed with fireworks and so much more.

A solid and wonderful addition to the horror anthology genre, Scare Package is a perfect film to watch Halloween night or any other evening where you want to be entertained with some tongue-in-cheek, exuberant, and disgusting splatter.

Scare Package is available on VOD, Digital HD, DVD, and Blu-ray
on October 20, 2020, from Shudder and RLJE Films