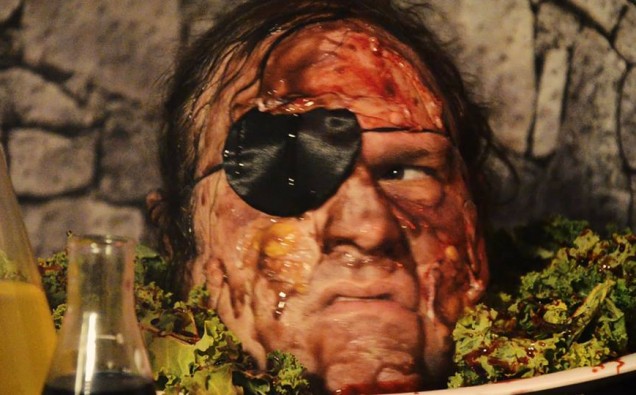 Scream Machine is a new anthology film that has a very interesting feel to it. It came across, to me, as Creep Show set in Tromaville. Hell, they even got Lloyd Kaufman to do one of his amazingly cheesy and entertaining introductions at the beginning! Our hosts of this anthology are a plague doctor and his severed-head companion, Mr. Head. Together, they lead the viewer in to 5 horror shorts.

These shorts include “Sledgehammer” (a slasher-esque short with a baseball theme), Cannibal Pen Pals (a love story with an appetite), April Fool’s Party (where jokes can go very wrong), Septic Shock (like Septic Man, but you know, entertaining), and The Deadly Indie Drive-In (she really should have taken her meds).

The entire affair has a very low budget, indie feel which feels almost stylistically intentional. Combined with visual nods to the aforementioned Creep Show, this is an anthology film that knows it’s audience. If you love cheese, if you love projects of obvious real passion, this is one you’ll want to check out!

You can pre order the DVD now by going HERE!