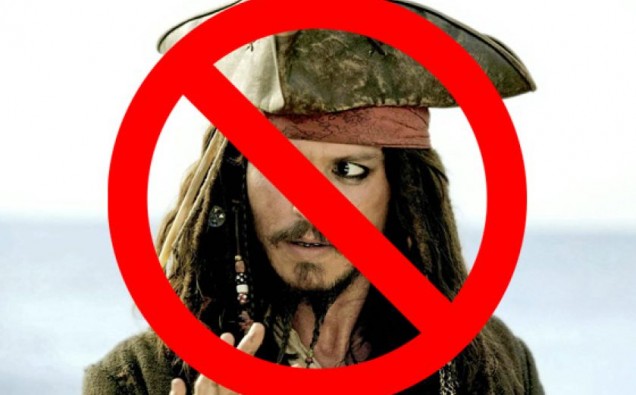 Internet piracy has become a real problem. And one of the biggest problems is that people who do it don’t see the problem. I’ve experienced the repercussions myself and when I found out that scream queen Devanny Pinn had very strong opinions on the subject, I asked to get her views on the record. Here’s how it went!

John Lepper: Thank you, Ms. Pinn, for taking the time for this interview. Piracy has been a hot topic of debate over the past few years. What is your opinion on internet piracy?

Devanny Pinn: My opinion is that it is ruining the film and television industry, but that people do not understand that. My goal is by breaking it down, that hopefully people will be able to see the bigger picture and how it affects them.

JL: How do you feel that it is ruining the film and TV industry? What is the actual effect, would you say?

DP: Our business is very much like any other. If you walk into a grocery store and take an item without paying for it, its theft. Now sometimes you really just need to eat and may not have money for that food item and think because of that fact that its doing more help than harm.

You would be correct.

One person taking one item means nothing to the businesses that make them. They can afford it.

However, if everyone in the world took an apple with no penalty to them, then that company would be out of business.

If that happened to every item in the grocery store, then food stores would go out of business.

Eventually, finding ways to provide food to people who need it will be very difficult if not impossible… and currently, thats where we are headed with the entertainment industry.

The video on deman age has gone from convenience for our viewers to a very easy way to upload videos and view them without payment.

I think everyone has at least thought about if not actually torrented something.

However, it has gotten so out of control that it has changed the way we do business and now affecting what Hollywood is making.

For us little guys, we are close to out of business for good.

People think their one download makes no difference and we are all making huge money. That is not the case.

The journey to get your film to the public when you are an independent filmmaker is excruciating. To put your heart and soul into your work for years only to see it torrenting a few days after its release is the worse feeling I have ever experienced.

That means it will not turn a profit, because we do not have a major studio behind us to help or advertise.

That means that other outlets that may have watched the sales of the first few to see if your movie is popular enough to risk carrying it, will not.

Which means your film often will barely cover the expenses of making available to the public in the first place… and that makes you will not be making another movie.

The 50-100 people employed by that production will now be out that next job.

It is a vicious cycle and it really does hurt.

JL: It really is a severe problem. How has it affected you personally, Devanny?

DP: I started as an actress in films. I have a soft spot for indies because I was addicted to all the passion and creativity that went into them.

Often they are very low budgets and while I am always paid a very fair rate, it’s not a very comfortable living unless you are doing many films per month.

Yes, surprise there is not big Hollywood money coming in.

So often I would get what is called ‘points’ as well as a salary for doing the movie.

Points are percentages of the films profit.

However, 40+ movies later and I was getting very little or nothing at all.

I thought that couldn’t be right, so I decided to start producing my own movies thinking there would be a better quality of life if the film was my own.

What I ended up learning is that there are so many other levels to having your money taken from you. It is a fight at every step.

Distribution companies and others responsible with taking your movie and getting it to the public often prey on smaller filmmakers and know that you do not have the ability to fight them when they do not pay.

It is a long, exhausting labor of love with very little return.

I think many people feel that everyone in this business is greedy and rolling in cash. While those people DO exist, the majority are quietly trying to make ends meat.

I was very surprised to find that. Most people have second and even third jobs.

So when torrenting came into play it was yet another blow.

Everyone of the films I have made has been torrented

My first film with a little bit of a budget to it “Dead Sea” has been torrented 3 different times now.

The first time it was torrented, it was in the Top 10 most downloaded films of the month.

I could not do a thing…just sit there and watch the movie I spent years trying to get an opportunity to make be downloaded for free 100s of 1000s of times.

It happened with my others as well. I fought so hard to get my tiny art projects on major platforms such as Redbox, Walmart etc. That is something that doesnt happen for many small movies.

Illegal downloads caused them to not get distributed in most foreign countries, we lost our bluray release opportunity and some of them, we actually OWE money on! Have not made a single dime after all our work.

Even worse, we were given an opportunity to have more of our films distributed to major stores and even be funded so we could continue to make movies…

But when the sales reports showed that everyone downloaded it for free instead of buying it, those chances to continue to work no longer were offered.

If companies cannot make money on your product, they do not order more.

That is the root of our problem here.

So many people are saying online “Why are there so many remakes?!”

Well..I can answer that for you.

That means that even after being torrented, sales reports show that people are still PAYING in some way to see those films or tv shows.

Whether its on VOD, Dvd etc, those are subjects people are passionate enough about to spend money on. SImple as that… and that’s why we have so many of them now.

The viewers have complete control these days! If you want more of something all you have to do is buy it. Even if its just a single dollar at redbox. That one dollar that you spend will tell someone calling the shots that there should be more of this.

DP: You are completely correct. Hollywood is not used to not making mega dollars. So when VOD happened they just denied it for awhile…until their viewership diminished.

Then when torrenting happened they saw MAJOR loss in profits…obviously that didn’t sit well. So when something was a hit and make money they JUMPED on it and ran with it.

Immediatley they went into production on a slew of copycat material to try and make up some of those missing profits.

And there we have it…the same few things shoved down your throat!

For awhile that was great news for indie filmmakers.

With Hollywood making crap, alot of people gave smaller or unique material a chance for the first time.

We got exciting voices like James Wan ( Saw/ Fast 7) and James Gunn who came from Troma and now directed Guardians of the Galaxy!

However, now anything less than major franchises is at risk to not be made anymore because of so much financial loss due to torrenting.

JL: I would also point out that, aside from torrenting which the government is cracking down on lately to some pretty decent success, there is also the illegal streaming sites which seem to be on the rise as torrent sites are being shut down. My first credit, co producer for Spirit in the Woods, has never been torrented to our knowledge. It has been streamed illegally, however, roughly 10k times, about as many times as it has been rented legitimately in it’s first 6 months. A near 50% loss on a film I helped fund working part time at Sears.

DP: YES exactly. I am so sorry to hear that.

There used to be more opportunity to make up that money too. But with video stores gone and things like netflix offering streaming for so cheap, when something is stolen on one of these illegal sites it hurts that much more.

I have had people tell me that they have torrented my films simply because they wanted to see them and it was not available in their area.

So lets chat that for a minute.

No one is more frustrated than me that my film is not available for a fan to view.

Companies are being extra careful these days because they do not want to loose money too. So they take their time with deciding if they want a movie in their smaller market or country.

Often it will ONLY happen if it performs well in major areas.

Sometimes you will see major movies “In Select Theaters”.

That is because the want to test out the water and see if it is going to make money before they risk.

If my film is not available in your area…please do NOT torrent.

If you want to see something come to your area in the future you have to hold out for it.

Otherwise it will tell distribution companies that there is no reason to bring that type of material to you because no one is buying. It will hurt the viewer in the long run.

And as we discussed previously… that means people making the type of things you would like to watch will be out of business and it will not be made. Therefore there will be nothing to buy OR download.

We are all on the same team in the big scheme of things.

People want to view entertainment and entertainers want to provide that.

We both need each other to make it happen.

You may save a few dollars right now, but it will have lasting effects.

JL: Absolutely. It really is a vicious cycle and people need to realize how much they contribute to it with pirating. Well, thank you very much for taking the time for this interview, Devanny. Is there anything else you’d like to tell the readers before I let you go?

DP: If anyone has further questions on the subject I try really hard to answer everyone regarding this since I feel its important! I do not want anyone to be embarrassed or hesitant either, I never judge anyone who has used it. I simply want to share information so hopefully we can all be successful.

Thank you so much John for giving me the opportunity to talk about it.

I look forward to buying your movie.

JL: Not at all, Devanny. And thank you! Best of luck in all of your future endeavors!