Because, honestly, you should know better by now 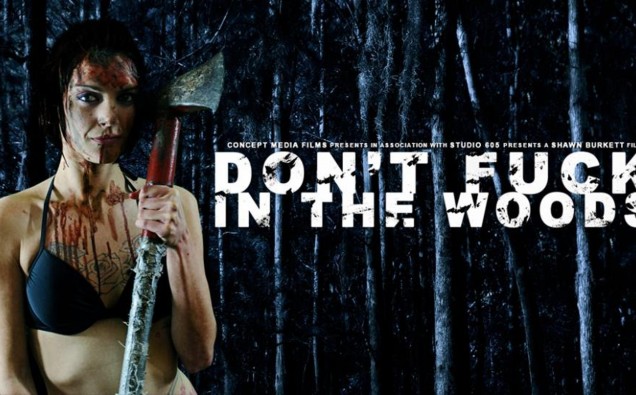 I was at Horror Hound Weekend a couple of weeks back and got the chance to meet Shawn Burkett. I had a sit down with Shawn and asked him all about his upcoming creature feature “Don’t Fuck in the Woods”. Here’s how it went!

Johnny Macabre: Ok, so, Shawn, what can you tell me about “Don’t Fuck in the Woods”?

Shawn Burkett: Other than it’s been a long time coming? (laughs) It’s a fun film. Probably not a family film. It’s about a group of kids who are just graduating college. And it’s one of those things where everyone is heading off to different states for jobs and internships so they want to go and just have one last weekend of fun. This time there is a creature who is, uh, curious about certain pheromones. This creature kind of becomes attracted to them after killing one group of people and becomes addicted. Anytime someone has sex, he comes and kills them. That’s pretty much the basis!

JM: So this is more of a creature feature than, say, a slasher film.

JM: Alright. What kind of creature are we dealing with here? Are we talking animatronics, cgi, practical fx, latex suit?

SB: We are doing all practical fx. Excellent latex suit. We may have to go digital with just the eyes. The mask that we made, we didn’t account for the contacts we have. The actor’s face sits too far back in the mask. So we may have to go digital with the eyes. But all the others effects, like we have got this girl who gets ripped in half and the creature goes through her intestines looking for a certain scent. We have an FX guy, Deryk Wehrley, top notch guy. He’s worked on Fear Clinic with Robert Englund. Thank god he knows what he’s doing because most of the time I am running around like a chicken with my head cut off! (laughs)

JM: (laughs) Tell me, how long have you been doing movies? I saw your table and you seem to have quite the back catalogue already.

SB: We started this in 2010 as far as when we decided to try making a movie. We released our first film in 2011. We’ve been trying to put out two movies every year.

JM: That’s very ambitious. After Don’t Fuck in the Woods, do you have any other projects planned?

SB: I’ve gots… OK, literally, my day job? I am a security guard so I literally sit at a desk all day.

SB: I bring my laptop with me. I like to think I am paid to be a writer because I just write all day. I literally have 15 scripts finished. I categorize them budget wise. I’ve got some things that could be done for like a couple hundred bucks. I’ve got one script that’s like a fantasy type thing and I would probably need a hundred grand for that one. In 2017 I am hoping to release a film called Betsy. It’s about this confused girl who has a sexual obsession with blood. And as she finds out how to control it, it’s like any other addiction; sometimes you can control it, sometimes you can’t. And as far as overdosing, well, that’s murder. Between 2016 and 2017, we are hoping to have at least 2 full length films and some shorts.

JM: Very cool. Getting back to Don’t Fuck in the Woods, how far along are you now in this latest attempt.

SB: We resume filming June 1st. We end June 6th. In my mind, it’s going to be completely edited by September 1st. And then I am planning on having a release in the second week of October. I know it’s set in the summer, but it’s also a creature feature, so Halloween is my big target date.

JM: Alright great! Well, thanks again for taking the time for this interview. Is there anything else you’d like to tell the readers?

SB: Everything I have talked about, you can find out more at ConceptMediaLLC.com!