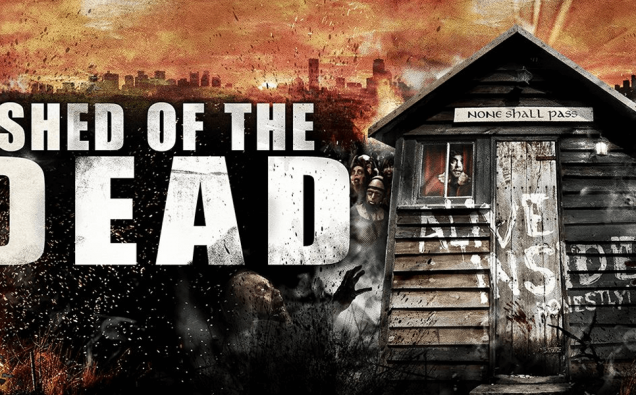 As a great lover of everything zombie, (as you may expect by my name) I was very excited for another zombie flick. Writer/director Drew Cullingham’s Shed of the Dead is a fun romp in the zombie comedy playground, with a few twists and turns, some big horror icons and a sprinkle of humor. 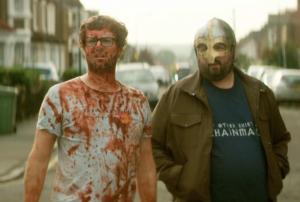 Shed of the Dead introduces us to Trevor, (Spencer Brown) who is the loathsome kind of guy you’d expect to be living in his mother’s basement. Hiding out in a shed on his family’s garden allotment, he paints little war toys, drinks homemade vodka and fantasizes about being a sexy knight in shining armor while playing war games with his disgusting buddy Graham. (Ewen MacIntosh) 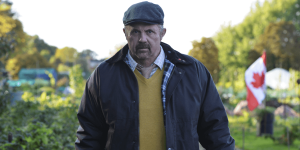 With a knock on the door, we meet horror icon number one, Kane Hodder. (Friday the 13th, Victor Crowley, Death House) Hodder plays Mr. Parsons, a well-dressed neighbor who does not approve of Trevor’s unkept garden. When Trevor confronts him about how he feels, Mr. Parsons accidentally becomes the ex-Mr. Parsons. Trevor, who instead of reporting this accident to the police, takes him back to his shed and takes out his frustrations on the body.

Luckily for, and unbeknownst to Trevor, a zombie apocalypse has started, the town around him is falling to rubble, and he doesn’t even notice. When Trevor arrives home, he finds his unpleasant, henpecking wife (Lauren Socha) has been having a fling with her friend Harriet and his fantasy war buddy Graham has come over to in some way help him save the world.

So yes, I mentioned horror icons plural. I almost hate to talk about a favorite of mine, Michael Berryman (The Hills Have Eyes, One Flew Over the Cuckoo’s Nest) because of a scene earlier in the film of an embarrassing escapade with the before mentioned Harriet. She rides him like a pony literally to death. As a zombie, he does get revenge on her, so that made it a bit better and way more fair and square. 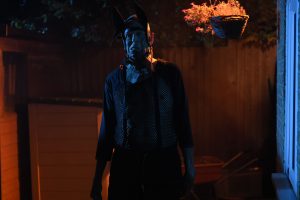 Shed of the Dead is a film that has, in my estimation, a target audience of young teen males. Oversexualized gross humor fills a good portion of it. Now don’t get me wrong, I still had a laugh or two during the film, but the cringe factor was high for a female my age watching the film. 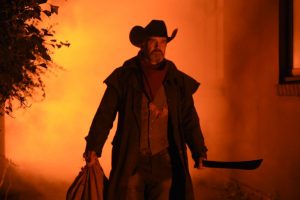 I enjoyed the graphic novel type animation, and the narration of Trevor’s fantasies by Brian Blessed was terrific. My favorite part was horror icon number three, the always amazing Bill Moseley! (The Devil’s Rejects, Three from Hell) Bill was a cowboy zombie hunter and I loved everything about him. He also had the funniest lines in the film.

To be fair, there were also some pretty great scenes about friends and family in between the gross dirty humor. But, none of the characters were very likable, so when they become zombies it’s almost a relief that they stop talking and get down to some zombie eating business.

Overall, since the comparison will inevitably be made, especially since this is a film made in the UK, this is not Shaun of the Dead, which along with Zombieland are my favorite zombie comedies.

Shed of the Dead has its own charms and lots of sexual innuendos. Not really for female viewing, but for a guys night of pizza and beer, it’s perfect. Geeky guys like Trevor and Graham have been ready for the zombie apocalypse their entire lives. Are they the ones that will inevitably survive? Is that the moral of this film?