It’s a captivating and frustrating story 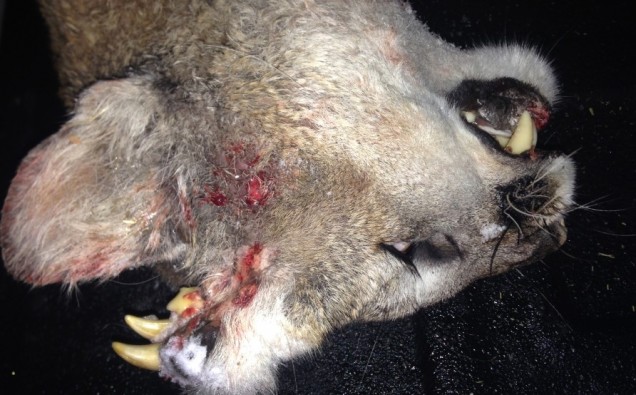 A mountain lion in rural Idaho survived years with a potentially debilitating deformity only to be killed by some ass-hat hunter.

Officials are seeking the individual whose kill was photographed at a Fish and Game Department checkpoint on December 30th.  It’s disappointing (to those with distaste for hunting) that this was considered a “legal harvesting”, but the fact that Officers didn’t realize what a rare specimen they were looking at is infuriating.  That this anomaly worthy of study wasn’t retained for biologists, that it was released with its killer without even obtaining contact information—frankly, it pisses me off!

While this mountain lion reminds me of Edward Mordrake, the 19th Century man believed to have two-faces (one much smaller than the other), theories abound as to the cause of this animal’s bizarre malformation.

The teeth could be the remnants of a conjoined twin that died in the womb and was absorbed into the other fetus; or it could be a so-called “teratoma” tumor, a type of abnormality (whose Greek name translates to “monster tumor”) that can grow teeth and hair.

Of course, as horror fans, it’s fun to entertain fanciful, alternative explanation.  Is the beast a product of genetic engineering by government or mad scientist—or perhaps the result of alien experimentation?  Is it a fiend erupted from the bowls of the Underworld?

Probably not.  Unfortunately, though, we may never know.

Peep the creepy vid, courtesy of CNN, below.

What do you think about this bizarrely unique mountain lion?  Sound off in the Comments section!