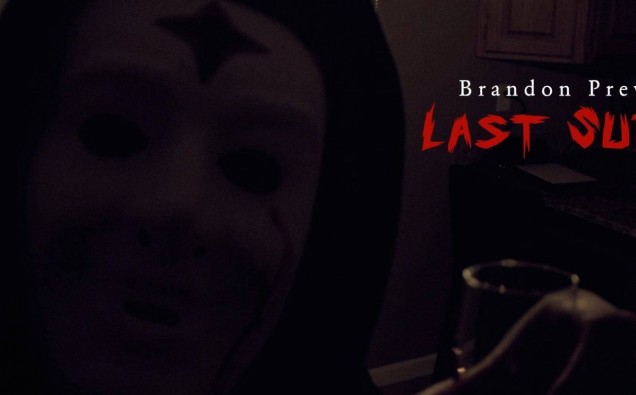 The Studio 605 team first became known amongst the indie horror scene in 2013 after the release of The Campground, a flawed but fun low-budget slasher film. Since then, these guys have delivered a pretty decent-sized slew of shorts and features (most of which are also slasher films). The team, which consists of Roman Jossart, Brandon Prewitt, and Jack Norman are seemingly always working together in a producing capacity, with the directorial duties differing per film. Brandon Prewitt, who last directed The Woods Within (review here), got behind the camera again for a short known as Last Supper, which I had the pleasure of checking out – and it’s easily one of the best short films I’ve seen in quite awhile.

The story is told from a mystery person’s perspective – for the first few moments of the film, the only things we know about this person is that they’re outside someone’s house, they’re apparently wearing a mask, and they’re for some reason documenting whatever it is they’re trying to spy on. If I say anything more in regards to what happens in the film, I’ll kinda be giving away too much info…but basically, the suspense builds up and before long, it gets ridiculously creepy (and pretty gory, too).

Let me make this clear: I’m a huge horror fan. You could say I’m quite the seasoned veteran in terms of watching films that fall under this particular genre of film…and I’ll say I’m not too easily frightened. This film, however, was genuinely scary as shit, and as I watched it from the comfort of the guest room in my home, I actually kinda found myself being legitimately the most creeped the f*** out I’ve been since God-knows-when. I’m giving you a fair warning – whatever you do, make sure you do not watch this film at night with the lights off…that could probably be like, pretty detrimental to your health or something. I don’t know what the hell Brandon Prewitt was thinking when he came up with this, but it’s seriously incredible and I give him all the props in the world. Keep doing your thing, Brandon!

The Campground: The Requel, which works as both a sequel and a remake to Roman Jossart’s The Campground, premieres at the Greendale Cinema in Greendale, Indiana on Thursday, November 12th. This six-minute short film will be playing before that film screens, so that means if you get the chance to attend, you’ll not only see what will more than likely be a badass feature, but you’ll also get to see this tremendous short. In other words, don’t miss out on this. I’m sure it’ll be a lovely time.

I hope you enjoyed my review, and always be on the lookout for more reviews in the future. So long.