Slasher comic We Kill The Dead now available for pre-order! 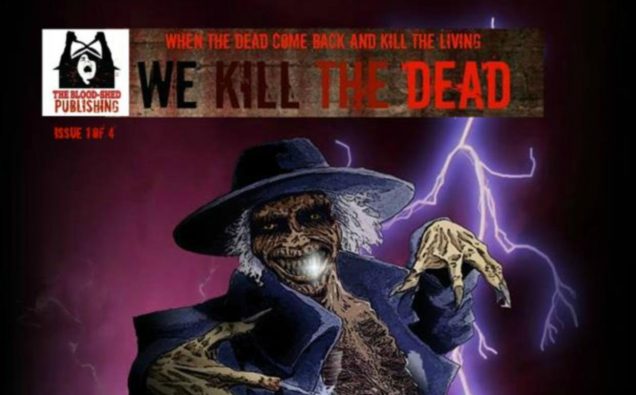 We Kill The Dead is a world record setting horror comic written by TheBlood-Shed owner John Lepper, with art by Bryan Revell.

Set in a world where undead slashers, or thano-sapiens, are real and a growing concern, a government agency known as the Supernatural Special Tactics Bureau is tasked with putting these killers back in their graves.

This 4 issue mini series following SSTB leader Nathan, deranged Agent Cooper, and newbie Jo as they are caught up in the fight for their lives against a century old legendary killer with a score to settle. Jack the Ripper is back and he’s pissed and to even the odds in his favor against the SSTB he is controlling an entire army of other supernatural killers. Can the team find out the secret to finally stopping the most legendary killer in history once and for all before it’s too late?

Featuring cameos for 25 slasher villains from real horror films, used with their creators’ consent, this comic features more separately owned characters crossing over than any other comic book ever, a record we are looking to get certified by Guinness! Featuring favorites like Leslie Vernon, Jack-O, BBK, Porkchop, Gurdy, Stitches, and tons more, this comic finally creates the joined slasher universe fans of the genre have been craving to see ever since Freddy vs Jason!

Issue 1 will start shipping May 24th but we are now accepting pre-orders.

All copies are signed by writer John Lepper

Note that the option to have it signed by artist Bryan Revell as well is also available, but for a steep increase. I live in New York, he lives in Hawaii. For us both to sign it, I have to sign it here, mail it to him to sign, and then he ships it to you. That is a lot more shipping to include in the price unfortunately. But the option is there for you if you want.

Also available on the store are exclusive signed prints, digital comics, and even a discounted subscription to the full mini-series!

You can check out our new store and all of its items here: http://thebloodshedstore.bigcartel.com/