The crossroads of two awesome genres 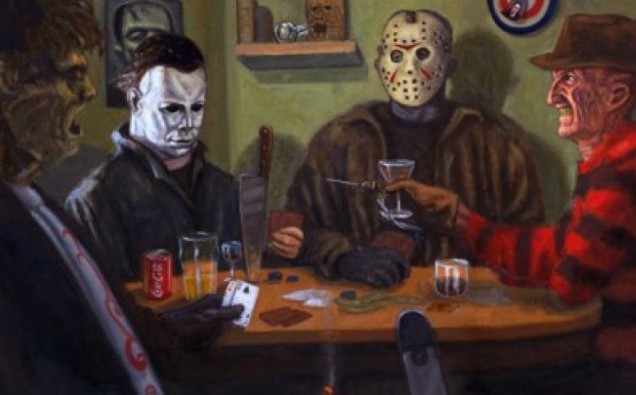 Slasher films. Few subgenres have become as synonymous with horror. Ask a person on the street to name a character from a horror movie and 9 times out of 10 they’ll name off Jason, Freddy, or Michael. I love the slasher genre. Especially supernatural slashers. To me they are the crossroads of my two favorite genres: horror and superhero. Don’t see the connection? Let me break it down for you.

1. Secret origins
All the superheroes have secret origins and there are always new twists revealed. Something that shows another aspect of what has made them they way they are. Well, look at slashers. Peter Parker was bitten by a radioactive spider and Freddy Krueger made a pact with dream demons. Captain America was a military experiment and Michael Myers is under a druidic curse. The Hulk was bombarded with gamma radiation and Chucky used voodoo to put his soul into a doll. These don’t seem all that different in terms of fantastic backstories, do they?

2. Strange powers
Whether it’s spinning webs or killing people in their dreams, both superheroes and supernatural slashers exhibit a plethora weird and unusual abilities. I’ll see your laser vision and raise it one possessing people from their TV screen.

3. Garish costumes
Really, which is stranger at the end of the day? Running around in spandex or wearing a hockey mask in any situation other than actually playing hockey? I always wondered why the first reaction to getting superpowers was to throw on a pair of tights. Well, the first response to coming back from the dead seems to be to wear some weird mask.

4. THEY NEVER STAY DEAD
Professor X once said there are no pearly gates in mutant heaven, only revolving doors. No one stays dead in comics. And the same can be said for slashers, considering how the films tend to end with the killer dead only to return again the next sequel.

5. Shared universe
Whether you’re talking about Marvel or DC, hundreds of superheroes are consistently shown to live in the same world. And, while not as explicit most times, the same can be said for many slashers. There’s Freddy vs Jason for one. But past that, there’s Freddy’s glove, Michael’s mask, Jason’s mask, and Leatherface’s chainsaw in the evidence locker at the beginning of Bride of Chucky, the mention of all the icons in Behind the Mask: The Rise of Leslie Vernon, the mention of Leslie Vernon in Hatchet 2, the Freddy vs Jason vs Ash comic, Hynocil ala Nightmare on Elm Street appearing in Stitches, the Hack/Slash comic crossing with Victor Crowley, Chucky, Herbert West, and Ash, I could go on and on. And we can argue canonocity all day, but the bottom line is that these references exist and at face value all of these characters live (unlive?) in the same world.

So, yeah, supernatural slashers are the superheroes of horror. Excelsior!