Southern Fried Hillbilly Horror: A Look Back At House of 1000 Corpses

How Does Rob Zombie's FIrst Feature Hold Up? 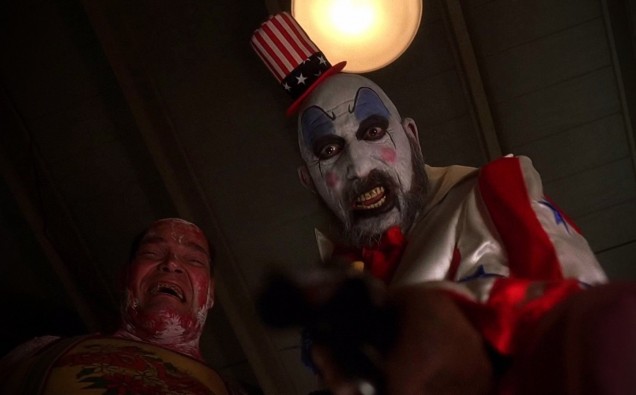 What kind of image does the title House of 1000 Corpses bring to your mind? The first thing that popped into my head was a haunted house, but not one of the good ones. Growing up in rural West Virginia I have gone to more Southern Carnivals than I care to admit, and everyone of them had their own monstrous mansion, located right next to the Fried Lard stand and operated by a carny with more tattoos than teeth.

While these ghoulish establishments varied in some ways, every carnival fun house had a few things in common; poor production values, grimy interiors, and unbelievably half-assed attempts at being scary. Everyone of them had bawdy names like “The Maze of Death!” or “The Black House of Doom”, and were over almost as soon as they started, waiting for another round of suckers to pay their money and go on through. However these attractions never stayed around for long, often open only for just a month or two, only to be driven away on rusty wheels to frighten another town of hillbillies.

And that’s exactly what House of 1000 Corpses is; an inept, low budget horror show filled with gore, nudity, lewd language, and more Southern inbreds than a Clampett family reunion. It’s crude, poorly made, often flat-out terrible, but also an absolute blast of shoddy entertainment. Despite major problems, Rob Zombies first film remains one of the most balls to the wall fun horror movies ever made. 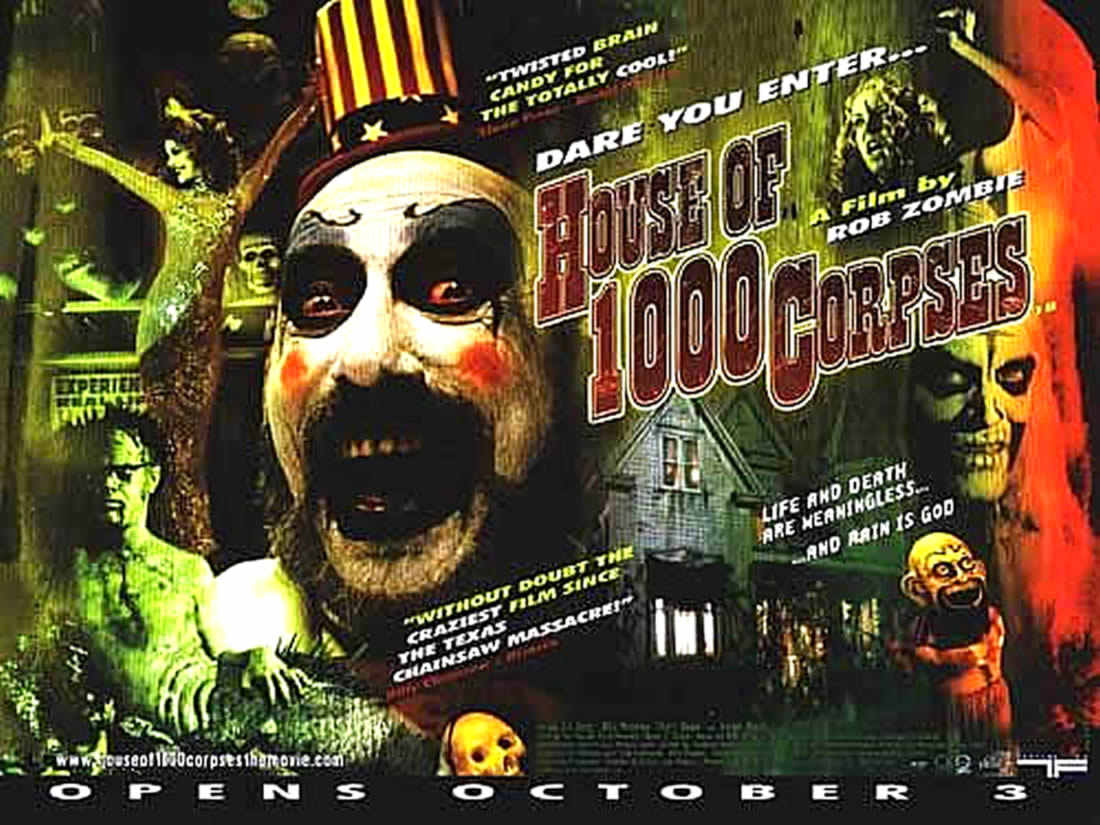 If you want to get an idea of the story in 1000 Corpses, think of The Texas Chainsaw Massacre shot in the rural south and slathered with clown makeup. As is par for many films of this type, there isn’t much of a story here to make note of; its a fairly basic tale a group of four teens (including a young Rainn Wilson) venture into the wilderness to try and find the legendary Dr. Satan, only to be systematically killed and tortured by a crazed gang of sociopaths known as The Fireflys. For seasoned horror fans, this general outline is nothing new; I can name half a dozen “nutty family killing teens” before breakfast. But one thing I can say is, very few of them do it with the flair of Rob Zombie.

One thing most films in this little sub-genre do share is a quality group of villains, and House has some of the nastiest sociopaths in all of horror. Roger Ebert once famously described crazy clown Captain Spaulding as a “man whose teeth are so bad, they’re more frightening than his clown makeup.” The good Captain isn’t alone in his madness however, with the rest of The Firefly’s showing a crazier side as well. But while Otis, Baby, Tiny, Mama are a fun, if generic, bunch of sociopaths, there’s no denying Spaulding is the one who really steals the show. 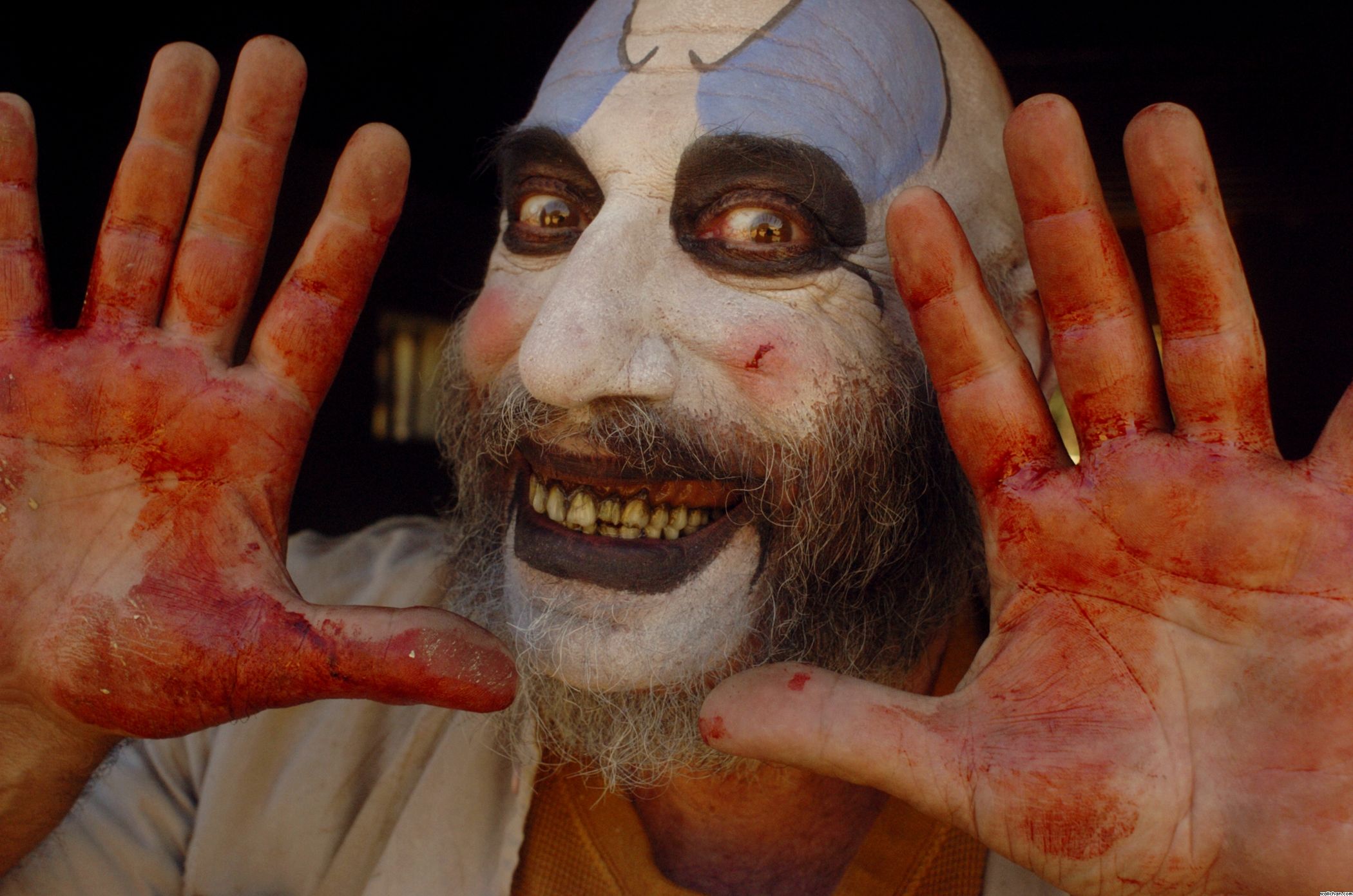 I’ve always been a sucker for killer clowns, and while the good Captain might not be the scariest, he’s definitely the most vulgar, and one of the most fun. Despite a relatively minimal role in House (Spaulding gets a much meatier role in The Devil’s Rejects), actor Sid Haig makes the most of it, delivering an icon making performance. Captain Spaulding’s reaction to being robbed at gunpoint? Telling his assailant to “Fuck yo Mama! Fuck Yo Sister! Fuck Yo Grandma!” before pulling out his own piece and blasting them away. With makeup greasier than his famous fried chicken, John Wayne tattooed on his forearm, and operating a gas station/freak show as dirty as he is, Spaulding is a real piece of hillbilly shit. And while his character is built even stronger in the sequel, this is a great introduction to the nastiest clown in cinema.

Unfortunately there is one big flaw that knocks House off it’s foundations. While 1000 Corpses does work very well as a horror show of oddities and violence, it never really does evolve into a cohesive story. Bad things happen, people die, and mutants aplenty show their hideous faces, but nothing ties together particularly well. Rather than a consistent thread, Corpses unwinds into a bloodstained knot; interesting to look at, but at times convoluted and hard to follow.

In fact, by just about every standard that makes a film good, House fails amazingly; and yet, it’s still a film I and many other horror fans adore. People don’t love it without reason- while Corpses might be a shitty movie, like I said before, it still makes for a hell of a horror show. Blood, boobs, rednecks, and meth teeth; House of a 1000 Corpses has them all in spades, and more exploitation than you can shake a clown suit at. A few friends and more than a few beers, and this becomes one of the most fun movies you can pop into the old Blu-ray player. And if you still don’t like it? Well, in the words of Captain Spaulding himself, “Most of all, FUCK YOU!”

Jeff is a writer for the Blood Shed who eats, drinks, and bleeds horror. He’s also the President and owner of Head On A Stick Productions. You can contact him at Headoasp@gmail.com