Splatter fans rejoice! Hotel Inferno 2: Cathedral of Pain being made!

The sequel to the first ever POV action/horror! 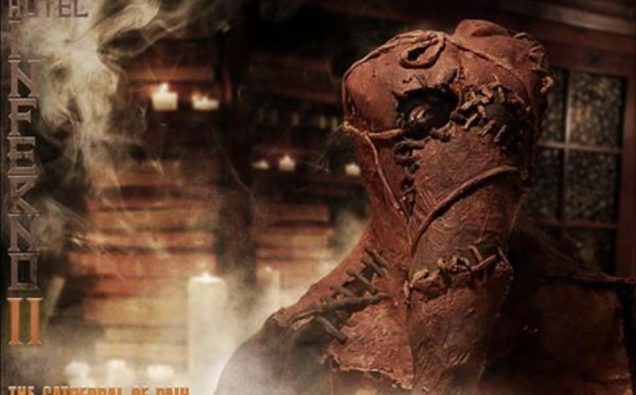 Hotel Inferno is a phenomenal indie splatter film shot in POV. It is one of Necrostorm’s greatest in their ever growing catalogue. Telling the story of a contract killer who must fight his way out of a hotel filled with cultists and monsters, in addition to being horror, it is also the first ever POV action film, beating out Hardcore Henry by a substantial margin. Now, Necrostorm is upping the ante and making Hotel Inferno 2: Cathedral of Pain, a film they have dubbed as the first ever “colossal-scale splatter film”. But they need your help to make it happen!

Here at Necrostorm, we’re putting every shred of our financial and filmmaking efforts into making Hotel Inferno II:
the FIRST COLOSSAL-SCALE splatter film EVER.
Over 8,000 blood-soaked practical effects. 1000 intricate animatronics. Eye-melting 4K resolution. Astonishing digital FX. Huge monsters. Gigantic sets. Hundreds of actors and a selection of action/gore scenes the likes of which you’ve NEVER seen before. This movie is intended to re-write the definition of the Splatter Film – finally bringing the genre to levels comparable to any other big-budget Hollywood movie. So far, the film is 50% in the can and our staff have already begun editing the first part. In fact, we also have 4 other Hotel Inferno sequels currently at pre-production stage.

But to make Hotel Inferno II the COLOSSAL film we all want to see, we need YOUR help.
If you pre-order one of the available packages today, your faith in us will go directly into making one of the most mind-blowing splatter movies ever created – and, of course, you’ll receive your purchase as soon as the movie is released (there is currently no set release date).
More importantly, you’ll play your part in writing a new page in cinema history: the day the splatter film ‘levelled up’ and took Hollywood head-on.
We do have the means and ability to finish the film, but without your help it simply won’t be on the game-changing scale we sorely want to achieve.
YOU will make all the difference… and help us create the first ever COLOSSAL SPLATTER FILM

Basically, they are hosting their own crowd funding campaign. Check it out and help this movie get made at http://necrostorm.com/movies/HotelInferno2/Buy.html!