RLJE Films will release the thriller SPREE in Theaters, On Digital and On Demand August 14, 2020 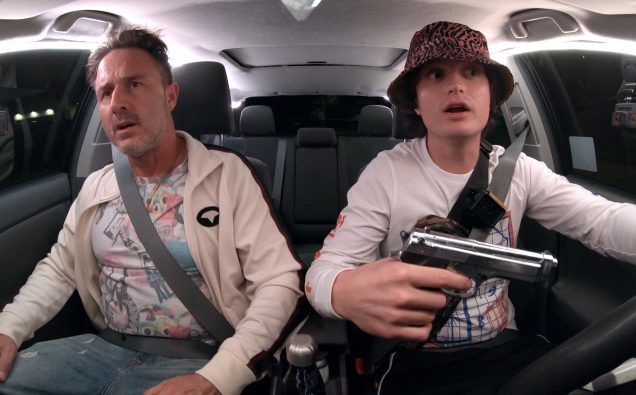 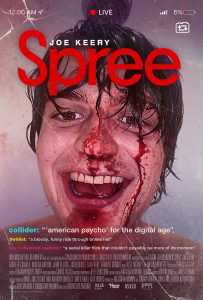 Eugene Kotlyarenko’s Spree takes us on an insane commute into the dark unhinged mind of Kurt, creator of the live stream @KurtsWorld96. Kurt is a nihilistic twenty-something who is so addicted to social media and the idea of fame, that he will literally do anything to get followers.

Spree is a fascinating and shocking “streamsploitation” (I may have made that up). The deliciously bloody film continuously keeps the energy rising at a breathtaking rate. It is impossible not to get completely caught up in watching the young serial killer’s meteoric rise and fall.

Director Kotlyarenko says of the film: “Spree is a movie I’ve been yearning to share with the world for a long time. As a satire of an influencer culture gone mad and the numbing violence that characterizes modern-day America, I hope it can offer a new window of critique into some of our society’s most frightening maladies.” 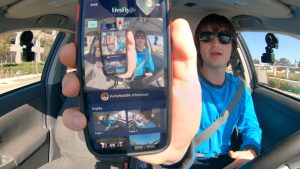 Synopsis: Meet Kurt, from @KurtsWorld96. (Joe Keery) He dreams of sitting atop a social media empire, but for now, he drives for the rideshare company Spree. Fortunately, Kurt has come up with the perfect way to go viral: #TheLesson. He has decked out his car with cameras for a nonstop live stream full of killer entertainment – murdering his passengers. In the middle of all this madness, a stand-up comedian (Sasheer Zamata) with her own viral agenda crosses Kurt’s path and becomes the only hope to put an end to his misguided murderous “spree”. 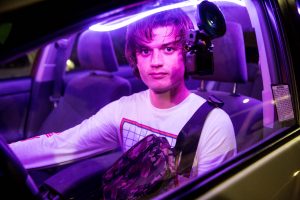 Spree is a perfect film for right now, with the misuse and hurtful nature of social media affecting everyone. Joe Keery, who played the adorable Steve Harrington in Stranger Things, shines again; playing the dorky and complicated psychopath Kurt. He was coddled by his mother, ignored by his drug addict DJ father (David Arquette) and is a failure at the one thing important to him, to become the most popular social influencer of all time. This desire has created a monster just waiting to be set free on the internet and the world. Tonight, is his night, or is it his nightmare?

There is an odd period in the film, where you start to feel sorry for Kurt, even as he slaughters the amazing cast of fun characters around him. (Mischa Barton, Kyle Mooney, and Josh Ovalle to name a few) He is so awkward it almost hurts to look at him, he’s like a sad little puppy. He can’t help it he’s a loser. But then he is showering in his victim’s blood in their own house and you see the sociopath he really is. 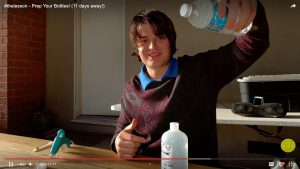 I loved the combo of multiple live streams and different social media types being used at once. This is a world I’m not super familiar with, but one that all our kids know, oh too well. I tried to watch the comments flying by as the number of followers grew, most of them either claiming it all to be fake or encouraging him to KILL! His audience was insatiable, as are most people that live for social media. There is violence and cruelty drilled into our heads daily and we casually ask for more.

Kurt was ready to give them what he thought would work, but I don’t even think he had any idea of how far he would have to go. He started the night with 10 followers and only one actually watching, but by the time he was done he had over 50,000! Finally getting his dream realized, and since he had nowhere to go but down after the crazy night of carnage, he takes a moment to thank all his sick new followers before the big finale. 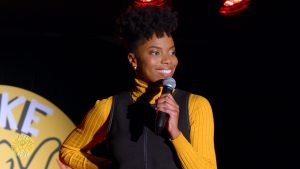 His biggest mistake was to try to get standup comic Jessie Adams (SNL’s Sasheer Zamata) to be a part of his world, share her experience as an influencer on him, tag him, and help his audience grow. The worse he acts, the more followers he gets, but by the action-packed ending, we see the real Kurt and sadly what it took to get him from zero to 50,000 watchers. The experience with Kurt, surprisingly turns Jesse’s life around in a positive way, even though she has to kick some serious ass to get there. 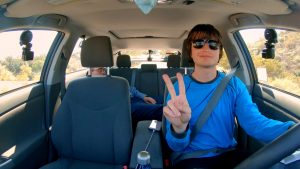 There are many film inspirations that I noticed, but Kotlyarenko explains more thoroughly: ”Taking inspiration from films like To Die For, Taxi Driver, A Face in the Crowd, Network, and American Psycho, and blending them with Gen Z culture, the movie aims to tackle the frightening epidemic of violence in our society and link it to our desperate need for attention. With a unique, cringeworthy characterization at its core and a fresh cinematic language, I hope that Spree will shine a new light on the disturbing and absurd nature of our thirsty culture and the monsters that it can create.”

Spree is a slick and campy thriller with a message to all of us. Social media is a dangerous addiction, but watch this film anyway! You need to see it!!! Oh, BTW I am Los Angeles Zombie Girl on Facebook and Zombies.vicki on Instagram if you are interested. LOL!

RLJE Films will release the thriller Spree in Theaters, On Digital and On Demand August 14, 2020.