UPDATED: 8/17 with updated final line up. Originally written 7/20, some guests have unfortunately had to can due to other commitments, and honestly with a guest list this size,... 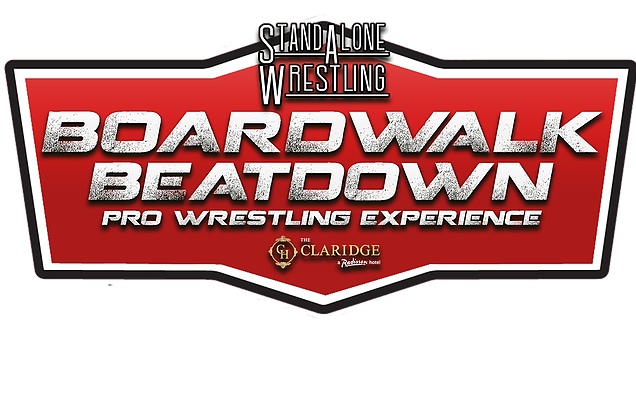 UPDATED: 8/17 with updated final line up. Originally written 7/20, some guests have unfortunately had to can due to other commitments, and honestly with a guest list this size, with most of the people still active in the wrestling or entertainment industry, it is to be expected. Don’t worry though, they have added some big names to the guest list as well. Any references to guests no longer attending from the original article have been removed [except one, you’ll understand why], so if you read it the first time, read it again, it should appear totally different this time around.

This summer, wrestling reigns supreme in Atlantic City, NJ as Stand Alone Wrestling brings Boardwalk Beatdown: Pro Wrestling Experience to The Claridge on August 26th. While this may be a wrestling convention, there are some major cross over stars that will be in attendance, including a few from the horror genre.

First the big name on the list – WWE Hall Of Famer Bill Goldberg. Just simply “Goldberg” as he’s more commonly known stepped in the horror ring for the first time in the 2005 black-comedy horror film Santa’s Slay, where he plays a less than friendly jolly ol’ Saint Nick. His other film credits include Looney Tunes: Back In Action and The Longest Yard. Arrowverse fans might also know him from his guest appearances on The Flash as Big Sir.

Speaking of Arrowverse. the convention will also include several members of The Bullet Club: Cody Rhodes, The Young Bucks – Matt and Nick Jackson, Hangman Page, Marty Scurll and Firing Squad members Tama Tonga, Tanga Loa, as well as WWE legend ‘King’ Haku. What do they have to do with the Arrowverse? Well, Cody Rhodes (real name Cody Runnels) is know to Arrowverse fans as Derek Sampson, a drug dealer turned metahuman with the inability to feel pain, on the 4th and 5th seasons of Arrow. He has also appeared on Warehouse 13.

The third piece of Boardwalk Beatdown’s “Triple Main Event” is Steve Borden, better know as WWE Hall Of Famer, the icon Sting. While Sting may not familiar to main stream fans, in 1996 he did adapt some Eric Draven The Crow inspired face paint that lasted for the remainder of his career and in the early 2000s, was involved in a feud with a wrestler named Vampiro, which included Sting attacking Vampiro in a grave yard. So you can say that the Sting character is rooted in the horror genre.

Also appearing is the inaugural UFC Superfight Champion and UFC Hall of Famer Ken Shamrock. Known as “The World’s Most Dangerous Man”, Shamrock is currently filming the movie ‘Blood of the Patriot’, set in 1964 Vietnam.

Former LFL Chicago Bliss Quarterback and fitness model Danielle Moinet fka Summer Rae. Also know for staring in The Marine 4, I know she has a few projects in the works. Hopefully she can give me a few minutes to talk about them with me.

King Kong Bundy, a name most people will know, will also be appearing. Known for many projects outside of the wrestling world, including his guest appearances on Married With Children, a show where the main character is named after him.

Originally scheduled to appear was WWE Hall Of Famer Nikolai Volkoff who is fresh off an appearance in Daisy Derkins 3: Dinosaur Apocalypse (which also includes a cameo by myself as a professional wrestler in it – I know, shameless plug). I was able to visit the set the day that Nikolai was filming and have a live report of that going up on the site very soon. I was only able to talk to Nikolai for a few minutes that day, however he had promised me a more lengthy interview for my article at Boardwalk Beatdown, so I was waiting on writing that article until filming wrapped and I was able to talk to Nikolai some more. Unfortunately, Mr. Volkoff passed away 2 weeks ago. Have no fear, while our encounter on the set was brief, he did give me some good answers to my questions, and look for my on set report for Daisy Derkins 3: Dinosaur Apocalypse.

Boardwalk Beatdown has something to offer everyone, not just wresting fans. I hope to see everyone there, it’s gonna be hotter than a craps table with loaded dice.