‘Summer of ’84’ brings Nostalgic Horror to a New Level

"Even serial killers live next door to somebody." 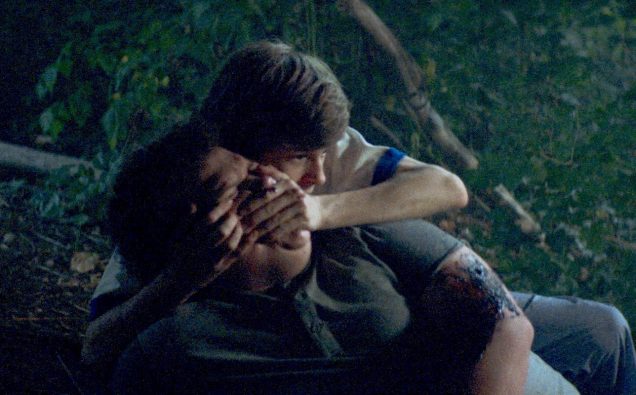 I didn’t think it was possible to fall head over heels in love with a film anymore! But I was wrong. Summer of ’84 just swept me off my feet for the 80’s all over again.

Summer of ’84 is written by Matt Leslie and Stephen J. Smith and was directed by the RKSS dream team of Francois Simard, Anouk Whissell and Yoann-Karl Whissell. (Turbo Kid)

From RKSS: “When we read Summer of ’84 back in 2015, it resonated with us on such a deep, emotional and nostalgic level, it felt like it was written just for us. This was our childhood; we were these kids and their friends. The three of us grew up in the suburbs in the ‘80s, before cell phones, internet or tablets, when information traveled more slowly than gossip. Our world was filled with adventures, and mysteries, feeding our obsession with ghosts, aliens and murder stories. …. It was the beginning of the end of the feeling of security and community of suburbia. Urban crime started to infiltrate the streets, kids went missing and people started locking their doors.”

The ‘80s was a bittersweet era for me too, and this film really took me back to a simpler time- a season of my life when I was young, had the world in front of me and was inexplicably fascinated with serial killers. I know I’ve shared with my readers that I’ve been obsessed with the serial killer mind for a very long time, so I felt a truly kindred spirit to the character of Davey.

Riding his bike through the manicured suburbs where he lives, Davey laments that we never really know what people are like behind closed doors. At this point he is excited to think about true crime, never suspecting that things could go bad, very bad if he sticks his nose into the business of the not-so-nice neighbor hiding in plain sight. Who are the good guys and who are the bad guys? He is so naïve and innocent and has no idea of the horrors to come, or of the consequences. 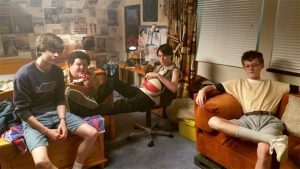 Synopsis: For 15-year-old Davey, the thought of having a serial killer in his suburban town is a scary yet exciting prospect at the start of a lazy summer. In hormonal overdrive, Davey and his friends dream of sexual conquests until the news report of the Cape May Killer. Davey convinces his friends that they must investigate, and they uncover that his next-door neighbor, an unassuming single police officer, could be the prime suspects. Could Davey possibly be right, or is it his overactive imagination?

At first glance, the film reminds me of other shows. Most obvious would be Stranger Things, even though this is a human monster, not a supernatural one. Another film I thought of was Super 8. Set even farther back, it is still a group of kids trying to prove that something is wrong in their town, they know what it is both no one will listen. Both films are also very accurate with the clothing, historical facts, and the culture, and that’s one reason this film is successful as well. It’s not an original concept, but when done well, it works!! The film of this type that I love the best is the Hitchcock classic Rear Window. I’m most reminded of it, because of the scene where Jimmy Stewart sends in his friend Grace Kelly and she almost gets caught. Getting your friends involved in dangerous detective work is always sketchy! (FYI, for any of you youngins’ that haven’t seen it- Rear Window is a true must see classic!) 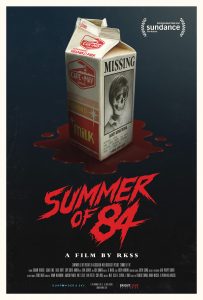 As I started to watch Summer of ’84 I began to wonder if it was a horror flick, (it is a bit of a slow burn) or did I pick simply a thriller? At first, it seemed like more of a friend group drama, but the characters drew me in and I enjoyed the story unfolding too much to care. The pay off was worth it! When it all the shit hit the fan, it was intense and became the full-fledged horror movie I had hoped for.

There is nothing low-budget looking about this film and all our young protagonists gifted us with believable and stellar acting chops, with my favorites being lead Graham Verchere as Deavey and his best friend Woody played by Caleb Emery. Rick Sommer who you may remember for Mad Men, is also terrific as the cop they think is the killer. With excellent cinematography and a menacing score, the film works perfectly in so many ways!

I am so paranoid about spoilers, so I don’t want to describe any more of the film! As laid back and nostalgic the rest of the film is- the last act is a crazy fucking horror ride! I just want to say over and over that you must see this film! Horror fans, culture fans, serial killer fans, etc…. will all love this film! Keep looking over your shoulder- you never know who might be watching you! Summer of ’84 will give you quite a bit to think about, long after the movie is over!

On behalf of Gunpowder & Sky, RKSS’ (Turbo Kid) SUMMER OF ’84 was released in theaters on August 10th and will be on VOD and Digital HD on August 24th.  For more info on when you can see this film check out the Facebook page at: