Taking A Bite Out Of “Carnosaur 2” 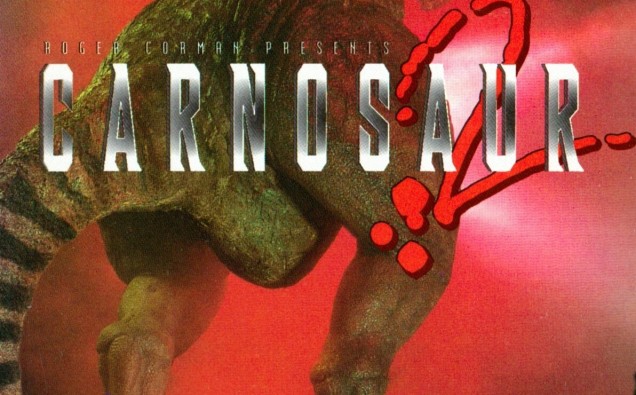 If you’re like me, then you love dinosaurs. If you don’t, then what’s wrong with you? Dinosaurs are one of the coolest things ever, & that’s a fact. Anyway, what’s just as cool as dinosaurs? Aliens. What’s the greatest alien movie ever? James Cameron’s Aliens (in my opinion, at least). Who else loves dinosaurs & the movie Aliens? Why, our good friend & B-movie legend Roger Corman does. So if there was anyone that would combine the two, it would be him. Welcome to a little film called Carnosaur 2.

The plot of this film is very familiar, so bear with me.  Basically, a team of engineers/scientists are sent to a nuclear mining facility in order to investigate a possible meltdown. Once there, though, they discover that the actually problem is a pretty decent amount of cloned dinosaurs that have ransacked the place & plan to make the team their next meal. They have to use their wits, as well as conveniently placed explosives, to outmatch their scaly assailants & make it out alive. So yeah, that’s pretty much the gist of it. Nothing groundbreaking or extravagant, & definitely nothing original by any means.

So, how is the acting in the movie? It’s…acting. Nothing great, but nothing too bad. John Savage (The Deer Hunter, Hair) does a decent job as the macho-man hero, Cliff De Young (Flight of the Navigator, Glory) does his job as the guy who wants to keep government property from being destroyed, & Rick Dean (Carnosaur 3, Stripteaser) plays the best character in the entire movie. Dean portrays the sarcastic guy who doesn’t want any part of anything, but still puts himself in harm’s way to help out. All the best lines come from him, & who’s just so fun to watch. I’d say, out of all the things this movie has to offer (which isn’t much), he’s the biggest highlight.

The dinosaurs in the film are in the middle of being pretty cool looking & very fake. The raptors in the film are just men in costumes, while the T-Rex that shows up at the end is a mixture of an animatronic & a miniature. It’s nothing to gawk at, but they don’t look bad. I’ve seen worse dinosaurs in movies (anything from Syfy), & these beat them by a long shot. Also, they are very bloodthirsty. There’s a pretty good amount of gore in this film, from one of the raptors tearing someone’s arm off to the T-Rex biting off a guy’s head. I wasn’t disappointed in the regard, & I doubt you will be either if that’s what you’re looking for.

There’s not much to say about this movie except that it is what it is…an Aliens rip off with dinosaurs. While it’s not the best dinosaur movie out there, it’s not a waste of time. IF you have nothing better to do except watch cheesy B-movies all day, this would be a good one to add to the list.