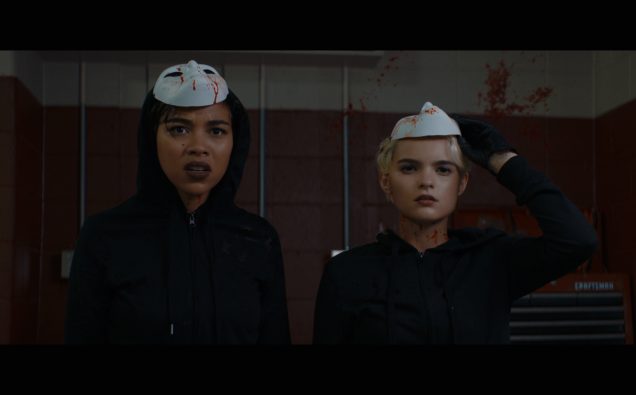 I loved Tragedy Girls with all of my black little heart! How can you not love the catchphrase- “Friends who slay together, stay together”? You can see my review of it here on The Blood-Shed. This dark comedy from Tyler MacIntyre took the film festivals by storm and gave us the best of 80’s slashers mixed with an introspective look at our Millennial generation’s social media world.

Tragedy Girls follows two girls from the small Midwest town of Rosedale, who are so obsessed with serial killers that they’ve created their own online show @TragedyGirls. When their sleepy little community is ravaged by a series of brutal murders, the girls take the opportunity to make a name for themselves. Kidnapping and locking up the real killer, so they can take his place, the two sociopathic best friends fit their killing spree in between cheerleader practice and planning their senior prom while sharing everything on social media.

It is a blast to watch the completely psychopathic need for our killers Sadie (Brianna Hildebrand) and McKayla (Alexandra Shipp) to slaughter everyone that gets in their way. Mix that with bubbly teen girl angst and the media exploitation of true crime on TV, you have an amazing and funny satire of our current social media blitzed world. 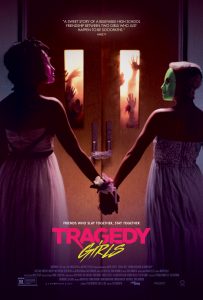 I got a chance to talk to Tyler MacIntyre, the director and co-writer of this witty, smart, incredibly funny and blood-filled tale.

Los Angeles Zombie Girl: Thanks so much for talking to me Tyler! I really loved Tragedy Girls! How did you get into filmmaking?

Tyler MacIntyre: “I started making little movies at home on VHS when I was about twelve, and then kept it up sporadically through high school. I also did a lot of improv comedy stuff around that time, and eventually started to combine the techniques, pulling in actors and people to help crew. Gradually the projects got bigger and bigger and in college, I started putting a more direct effort in, eventually admitting to myself that I wanted to be a filmmaker as a career.”

LAZG: Are you a horror fan? If so what’s your favorite?

TM: “I am a huge horror fan and genre fan in general. My favorite horror film is EVIL DEAD II. It’s so creative, scary and hilarious, an absolute masterpiece.” 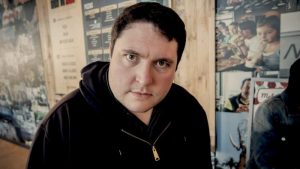 LAZG: Where did the idea for Tragedy Girls come from?

TM: “Chris Lee Hill and I were asked to come up with a take on an existing script with the same title, and we knew we wanted to come up with a different story. What they call a “page one” rewrite. So, Chris and I started talking about slasher movies and what we loved about them, and why they had fallen out of fashion. This was back in 2015. So, we decided to find a way into the movie that puts the young women who are usually the victims in a traditional slasher and makes them the perpetrators, rooting the entire story in their point of view. We then exaggerated and expanded things, borrowing a lot from the structure of high school movies, and it all fell from there.”

LAZG: In Tragedy Girls, there are a lot of nods to many classic horror films. Can you tell me about your influences for this film?

TM: “My main references were THREE O’CLOCK HIGH, JAWBREAKER and GINGER SNAPS, but everyone seems to equate it with HEATHERS and SCREAM. There are definitely nods to some classic horror films, some more subtle than others. Some of the direct references we made weren’t even creative references for us, but are really more about pointing younger/newer horror viewers towards films they should check out. For instance, there is a very broad CANNIBAL HOLOCAUST reference, but no real inspiration taken from that film.”

LAZG: Social Media is so useful, but also considered by some to be a narcissistic place for young people. Can you talk about how that applies to Tragedy Girls?

TM: “Yes. I am not a huge fan of the alleged phenomenon of millennial narcissism. I actually think it isn’t really true. Instead, it seems to me that how we interact with the world has changed, and to observers from older generations it appears narcissistic. Part of what we were trying to do was take that alleged narcissism and equate it with actual psychopathic narcissism in a satirical way, and show how ridiculous it is. That said, I am continually surprised by how close to home some of the stuff in the film has hit since we shot it.”

LAZG: You are quoted as saying this is a coming of age flick. Can you elaborate on that?

TM: “Definitely. The film is structured like a high school movie, beat-for-beat. Friends at a turning point in their lives struggle to embrace who they are becoming. This could be working together to save the rec center, or win the baseball championship, but in this case, it is to put aside their differences and create a legendary killing spree. Seeing the audience fall into that familiar structural rhythm is part of the fun of the movie, it helps them get invested in the characters’ goal and blind themselves to their moral issues.”

LAZG: Can you tell me a little about casting and about the amazing ensemble you brought together for this film? Also about Brianna and Alexandra, our little psychotic duo! 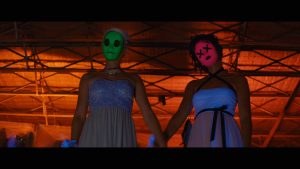 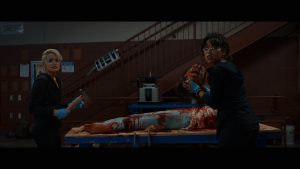 TM: “We were very fortunate to land Lisa Beach and Sarah Katzman as our casting directors, who are responsible for a lot of legendary comedy ensembles. We focused on finding the lead girls because they are really the heart of the film, and we had some very long lists. Brianna was recommended to me highly by a friend who worked on THE FIRST GIRL I LOVED, which she was in. Alexandra, I had seen in STRAIGHT OUTTA COMPTON and the AALIYAH movie she did. We put offers to them as a pair and realized they actually knew each other a little bit. So, we were able to build on their relationship in rehearsals, and they lived together during production, which helped hone the chemistry. From there we brought on Craig Robinson as a producer, then into the cast as Big Al. Then once we had some luck bringing in Josh Hutcherson, Nicky Whelan, and Kevin Durand, I knew we were going to have a very strong ensemble.”

LAZG: What can you share with me about your writing partner Chris?

TM: “Actually a lot of the girls’ psychotic breaks are based on what I experienced dealing with Chris during the writing process. Just kidding! He’s a great guy to collaborate with. Very pragmatic, funny, and we’ve developed a shorthand over the years that makes things so much easier to shape the story.”

LAZG: The SFX and soundtrack really added to this film! What can you tell me about the crew of amazing folks we don’t see on film. The unsung heroes as it were.

TM: “Thanks, we had a really talented practical effects team. Cody Wilkins and Brian Sides of Creature Effects became known as the “blood boys” on set for their relentless dousing of actors and the set.”

“The soundtrack was also a challenge. We had a lot of tracks to find and working within our budget was tough. Rylan Soref, our music supervisor, and my composer Russ Howard III were great and made things so much easier, both awesome at finding strategic solutions when I am at a loss. And of course, my cinematographer Pawel Pogorzelski, who also shot my first film PATCHWORK, was very instrumental in making each day happen. A guy really capable of brilliant stuff under a lot of pressure.”

LAZG: Tragedy Girls has kicked ass in the Film Festivals! Where all has it been and how many awards have you won?

TM: “I have been on the road a lot with the film; Brazil, Mexico, London, Dublin, Berlin, Spain, Toronto, New York, a lot of places. We’ve been lucky to pick up a few awards as well, most recently the Audience Award and Best Screenplay in Knoxville. Really very proud of how kindly it has been received.”

LAZG: Any fun stories about behind the scenes for Tragedy Girls?

TM: “Not really funny, most of it seemed mortifying to me at the time. I tried really hard to cast Jeremy Gardner in the film, who is a fellow director and actor who made a brilliant film called THE BATTERY. We actually flew him out to Kentucky to do a small part, but then on the day we had a large piece of equipment tip over in the mud, so we had to bump his scene. Unfortunately, that meant that he couldn’t stay to play it, so I had to recast and essentially ended up just flying him all the way to Kentucky to have BBQ with me. Felt pretty bad about that, but you gotta roll with the punches.”

LAZG: What was your favorite part about making this film?

TM: “The prom scene. My favorite movie of all time is BACK TO THE FUTURE, which has that great dance scene in it, and CARRIE is also a favorite, so I’ve always wanted the chance to do a scene like this. Our production designer Mars Feehery executed a brilliant ‘Titanic’ theme, which is so fitting, and Pawel did some amazing work. It was a lot of fun.”

LAZG: What were some challenges you had making the film?

TM: “For me, it was figuring out how best to utilize the team. This was a larger scale than I’d worked on previously, and getting away from the do-it-yourself mentality to delegate and utilize the talents your crew brings to the table. Still working on it.”

LAZG: Do you have any projects coming up that you’d like to talk about?

TM: “I am working on a project called NIGHTLIGHT with Chris Lee Hill and Unique Features that we are rewriting right now. More of a thriller, tension piece. Excited for everyone to see that one!”

LAZG: What is the best way going forward, for people to see the movie?

TM: “It is expanding to several more cities theatrically this week, so keep tabs on your local theaters and hopefully it will platform out to more states as we go. Spread the word! It should hit VOD later in the year for everyone to enjoy.”