I Was a Teenage Wereskunk: a hilarious homage to 50’s drive-in! 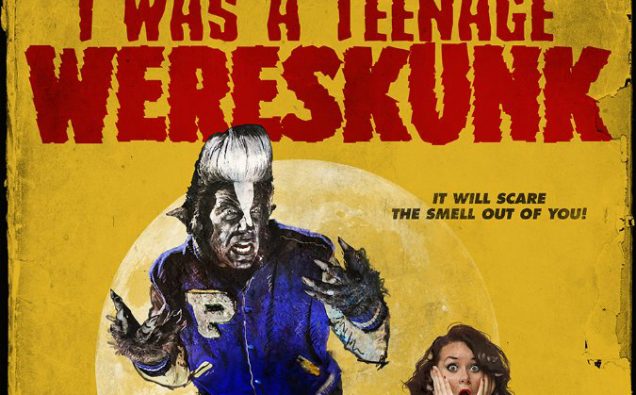 Ok, so the title on this one doesn’t leave much of the general plot to the imagination. It’s like a werewolf movie, but replace the werewolf with a wereskunk. The plot for I Was a Teenage Wereskunk simply is described as “A comedy homage to the drive-in monster movies of the 50s” and the film is about a high schooler who turns into the titular creature whenever he gets turned on.

The film is set in the 50’s and hilarious satire and period pop culture references are aplenty from the language, to the setting, to the events. The acting is amazing, the gags are fantastic. Some parts of the film actually remind me of the Scary Movie series, you know, before it started sucking (so, 1, 2, and some parts of 3).

The wereskunk costume seems to pay homage to the werewolf of Teen Wolf, which is to say they are not really trying to win any sfx awards here. The suit, more than anything, just lends itself to the comedy. Oh, and being that it is a wereskunk, you can be sure that there are lots of scenes of people being sprayed. In fact, that seems to be the creature’s preferred method of stunning its victims before mutilating them.

Overall, it’s a very well made, hilarious film with great characters (love the female-in-drag loose-cannon deputy), funny gags, and amazing satire. Hell, they even have an retro theme song during the opening and closing credits. Probably a good film to gauge whether you’ll like this movie is if you enjoy fellow period horror-comedy Fido aka “What If Lassie Was a Zombie Instead of a Border Collie.”

The movie can be rented for $3 or downloaded for $10 on the recently launched indie horror ppv site IBleedIndie.com!