There best there is at what he does 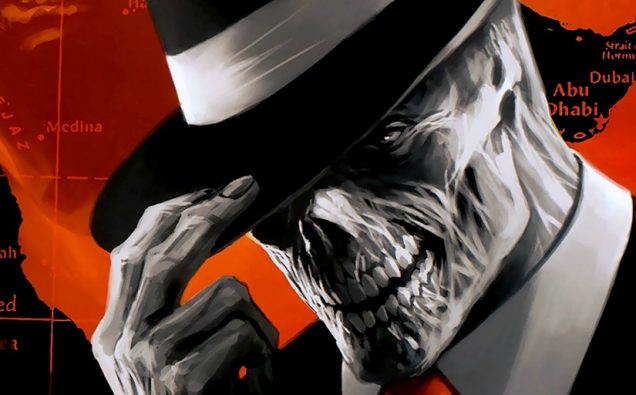 Thanks to the various films over the years, even the average person on the street is becoming more familiar with the supernatural side of Marvel comics. Heck, the first Marvel film of any real success was Blade and since then we have met Ghost Rider (two different incarnations) and Dr. Strange. One character most average people and even some self-proclaimed comic geeks might not know, however, is the character known simply as Terror. 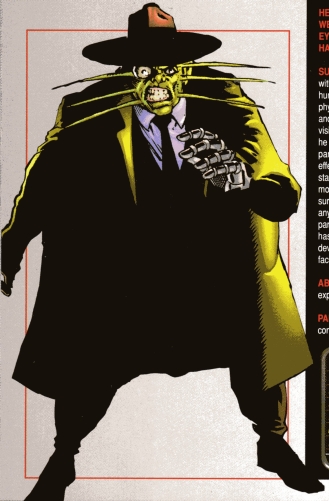 Terror is an immortal hitman with a code of honor, damned to forever be rotting on the hoof. He was one of the earliest humans on the planet and he saved the fledgling homo sapiens from a demonic bear, killing it in single combat. But by doing so, he inherited its curse. To live forever in a decaying shell. And this is where Terror is truly unique, possessing a power set unlike any other. For Terror to live, he must replace his parts as they become too deteriorated. In fact, only one part of Terror remains the same: the arm of his beloved, hundreds of years now dead, hermetically sealed in a special metal gauntlet. He has lived for centuries or even millennia and has always takes as his name the word which describes people’s reactions to his appearance. 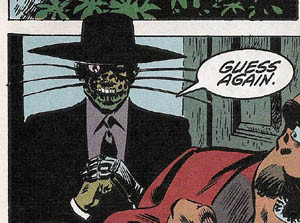 How does Terror take new body parts for himself? Well, he can take them off of corpses or he can rip them straight off of living people (or animals, he’s not picky when desperate) thanks to a special acid secreted by his fingertips. This same acid acts as a caustic adhesive to fuse the new limb to himself. Oh, and any memory or ability that limb had? He gets. The memory bit is a double-edged sword as he can use it to get information, but it also sometimes overwhelms him with memories not his own. The abilities? A sniper’s eye, for example, or a safecracker’s fingers. He can even add nonhuman parts to his body, like a demon’s wings to fly or a different demon’s arm to open a portal and banish it. If he takes a bodypart with a power, like that of a mutant, he acquires that power so long as he has that body part.

Terror originally was a part of a Marvel imprint known as Shadowline before somehow making his way to the main Marvel universe. The original idea behind this was to have him serve as a platform to reintroduce horror characters from the 70’s like Werewolf by Night and Morbius but instead a new incarnation of Ghost Rider served this purpose. Terror starred in his own 13 issue series, made various cameos in books like Daredevil and Wolverine, was one of the heroes in the League of Losers miniseries, and eventually had two further miniseries of his own under the Marvel Max imprint, the last of which was in 2009. The character has not appeared in any book since. 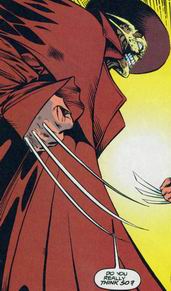 One of the best instances of Terror at his best was a 2-part story arc featuring Wolverine having been framed for murder by Hydra. Terror was hired by the victim’s powerful family to kill the ol’ Canucklehead. However, Terror, having a history with Wolverine, didn’t believe the mutant had done it. But there was only one way to be sure: get Wolverine to cut him and compare the wounds with the wounds on the murder victim. But it wouldn’t be enough to just ask Wolverine to do it, no, Wolverine had to be actually attacking for the comparison to be valid. So, armed with a mysterious clawed forearm (discovered in a shallow grave outside “a government facility in Canada”) to even the odds, Terror invited Wolverine to meet him at a diner and then shot him, instigating a fight. Terror discovered early on in the fight that the claw marks on his own body definitively did not match those on the victim and was left with the problem of placating a berserk Wolverine. Terror was being torn literal limb from limb when the fight moved into a nearby morgue. This resulted in Terror emerging from a pile of corpses, informing Wolverine that he now possessed the legs of a Muay Thai kickboxer, the arms of a butcher who knew right where all of the nerve clusters were, and the teeth of a grandmother who had a penchant for biting. When Wolverine asked if that was supposed to scare him, Terror replied “No, but if you don’t listen to me we are going to be in for a long night.” The story ended with Terror and Wolverine taking down the Hydra cell responsible. And the coup de grace? When Wolverine inquires just what Terror is and Terror replies “I am the best there is at what I do and what I do makes even your routine look pleasant by comparison.”

With Marvel getting more into the supernatural side of their vast universe and not being afraid to play with more obscure characters, how many of you would love to see a Terror Inc movie?