Another Convention in the bag 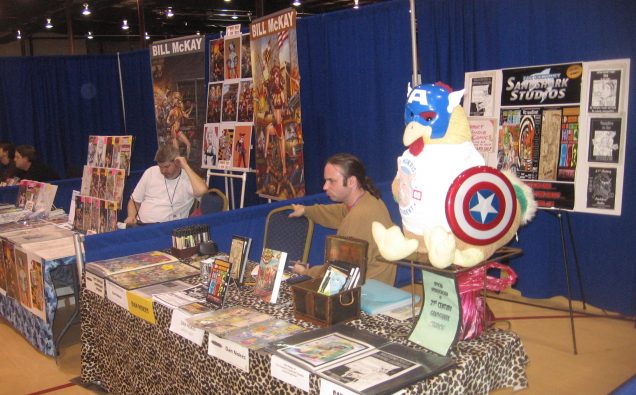 The backwoods of West Virginia have been the inspiration behind any number hillbilly murder flicks, but not all of it’s residents own more firearms than they have teeth. Sometimes we even try and pretend were like other states; hence the WV Popcon, the biggest Pop-Culture Convention in West Virginia. That might not sound like it’s saying much, but given Popcon is among the only major cons in the state, it tends to go all out. And guess whose making an appearance this year?

That’s right, your’s truly Jeffrey Scott will be in attendance, kicking ass, chewing bubblegum, and running The Blood Sheds very own booth. In addition to selling a number of Shed related items (Including but not limited to Johnny Macabre’s We Kill The Dead, books from The Film Phreak, cult film (who sequel I will be producing) The Carnage Collection, and early issues of a series I have contributed too Whorror Comix), I’ll be generally hanging out, answering questions and helping represent the brand. If for whatever reason you want a photo or something with my ugly ass, by all means feel free to ask. Conventions are just about always a great time, and I’m excited to be running a booth in one that has had my attendance for over three years now. So if you’re in the area stop by and purchase some shit, chill out, whatever.

Dates are Saturday August 27th from 10 to 7 and Sunday August 28th from 11 to 5. The address is 500 Mylan Park Lane, Morgantown, WV (Google Maps that shit if your unsure). Look forward to seeing all you guys there, and until then, have a wonderful life.

Jeffrey Scott is Head Writer for The Blood Shed and eats, drinks, and bleeds horror. You can send him harassing emails at headoasp@gmail.com