The Body Horror Of BITE 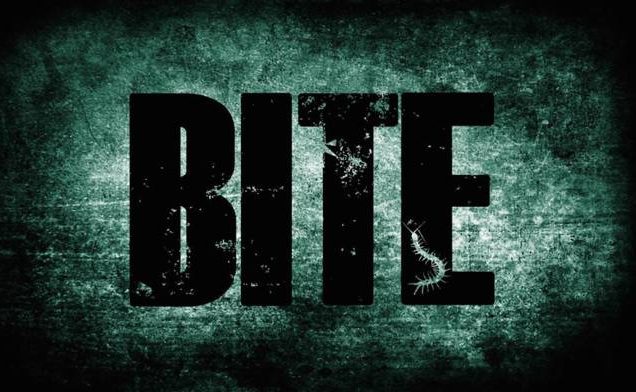 Doing my part again to help support Indie Horror, I recently rented the Scream Factory / Black Fawn Films release of the film BITE on Amazon.   With gossip lending to the stigma of this particular movie, some of which claim to have had some audience members vomiting and or walking out, I really wanted to experience this one.  I unfortunately kept missing the film on the convention circuit.  So I was happy to finally get around to see this seemingly disturbing tale of a bug bite gone horribly beyond wrong.

As if I needed another example, to help solidify my anxieties about traveling abroad, BITE follows the bachelorette party of Casey ( Elma Begovic ) a young woman with an impending marriage to Mr. Wonderful, her boyfriend Jared ( Jordan Grey ).  Casey and her two gal pals, Jill ( Annette Wozniak ) and Kirsten ( Denise Yuen ) head off to some tropical goodness by the way of Costa Rica, in hopes of relaxing, celebrating, and making some unforgettable memories together.  Chad Archibald ( The Drownsman 2014 ) Director and co creator, with Jayme LaForest ( Gods of Accident 2010 ) begin their story with a found footage style approach, depicting the three young ladies laughing, dancing, drinking and having a good time, but also laying the groundwork for the different relationships later adversely affected.  With all capitol letters filling the screen, a sound of impending doom, the journey of BITE begins……

Arriving back home to the apartment building Casey resides in, as well as her boyfriend living on the same floor, and frigid future Mother In Law managing, she almost immediately shows disconcerting side effects from the tropical bug bite.  Ranging from skin abnormalities to heightened sensitivity to sound, these troublesome ailments were compounded with her personal issues and feelings regarding the wedding, children, and a scathing sabotage upon herself facilitated by a craptacular friend and a fellow soulless individual.  All legitimate reasons for her declining health and humanity in her eyes.

Following an embarrassing and gross intimate encounter and reoccurring bouts of vomiting a slimy, clear liquid, Casey almost half attempts to reach out for help.  After finally gaining some well needed sleep, she awakes to herself altered quite significantly. 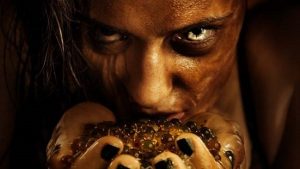 BITE’s special and practical effects were enjoyable to say the least and impressive for an Indie production.  The ‘creature’ Casey turns into, is complete with a Scorpion like tail, and successfully morphs the beautiful Elma Begovic into a monster.  These were performed by the combined, resourceful talents of Jason and Mason DeRushie, Amanda Wood, Ariana Roberts, Candace Britton, and Moira Garr.

The body horror galore  of BITE continues with Casey’s appearance beginning to take on a sinister tone.  An altercation between the Mother In Law and herself, provides a means for the unfortunate young lady to display her newfound, insect-like head clicking, as well as the need to transform her apartment into a dirty, dank, and dark habitat.  A habitat to ensure the safety and survival of her eggs, resembling Caviar, which now literally covers almost every surface of her home.

BITE is effectively creepy and held my grotesque interest throughout.  The bodies begin to mount when the transformation of Casey incorporates self defense features, possessed by all living things which adapt.  Some of these ‘special features’ laying claim to the demise of a friend who accidentally happens upon a rotting corpse in the tub.  Along with the intriguing evolution of the young lady bitten, supported by the stellar performance of Begovic, is the almost comic relief of the character Jill played flawlessly by Wozniak.  She has some of the best lines in the movie, one of which was “People always get sick on vacation, I’m sure they have seen this before……” Jill is bound to a chair, staring at the cocooned body of a pal, with the fully morphed creature barely resembling Casey nearby, as she says this.  Also, her reaction to entering the putrid apartment, after it’s impromptu redecoration, is priceless.

So with all the success I found within BITE concerning gross outs, effects, actors, and story, it still found a way for me to find joy in the slight fun it pokes at itself.  BITE doesn’t try to take itself too seriously, and I dig this, because now this flick can confidently earn my vote for nastiest girl on girl kiss…….ever.  The film does its job, entertaining and making some laughs available, coupled with ( to perhaps some ) nauseating scenes of horrifying transformations, fueled by the fear of contracting an unknown and aggressive illness.  Because damn……..I believe that is a fear many of us can say we share.