How does Point and Shoot Film's Debut Hold up Amongst The Splatter? 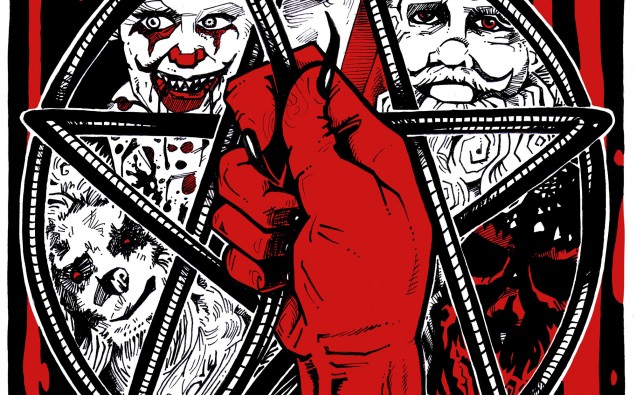 The Carnage Collection is one of the rare movies that’s just about exactly what it sounds like. Indeed, it is a collection of short films, and yes, there is plenty of carnage. And like a lot of anthologies, said films vary wildly in tone, subject matter, and quality, the sole link being gratuitous violence and a penchant for swearing that’d make an Irishman blush. There really isn’t a heroic character in any of Carnages many tales, just a wide variety of repulsive individuals waiting in line for the slaughter.

In that regard, Collection isn’t really a cohesive story, so much as a collection of blood drenched set pieces, along the lines of something like the Faces of Death series. However Carnage is a step above your average schlock fest for a couple of reasons, the largest by far being shear creativity.

Horror films, and the gore sub-genre in particular, get a lot of flack for blandness and lack of original ideas, but The Carnage Collection takes full advantage of its indie status to give us stories that could never be told through conventional means, with dialogue that’s manages to be inspired yet blunt at the same time. A man losing his dick after getting himself “some sweet VCR pussy!”, and a Santa Claus Statue bludgeoning people to death while yelling “Suck my Jingle Balls!” are only two of the 8 bizarre tales within.

While the film as a whole is worth a watch, it’s the finale segment Stuffed that stands out as something really special. Opposed to the relatively lighthearted tone that permeates the films beginning, Stuffed is brutally depressing, often hard to watch, but completely impossible to turn away from. Following a lonely woman who believes her stuffed Sloth toy is beginning to talk, it’s a nasty piece of work that with a less is more approach, delivers more carnage than the films seven previous segments combined.

So while overall this is definitely a little indie film gore fans should have a good time digging into, I encourage the creators to keep on improving into bigger and better things. If there is any one problem with Carnage, it is a lack of a structured narrative; a lot of amateur filmmakers start out with anthologies, and not without good reason. Their easier to schedule shooting, can more accessibly fit a limited budget, and are most often easier to write, without characters needing developed across a full length script. Personally though I’d dig a feature length version of Stuffed, although a Carnage Collection 2 would certainly not be a bad thing either. Whatever they decide to do, Point and Shoot Films have earned my confidence that they’ll do it well.

Jeff is a writer for The Blood Shed, and breathes, drinks, and bleeds horror. You can follow him on Instagram @thatjeffreyguy