The Ghastly Tale of Sawney Bean

Excuted without trial for crimes so horrific, Sawney Bean was the inspiration for Wes Craven's The Hills Have Eyes. 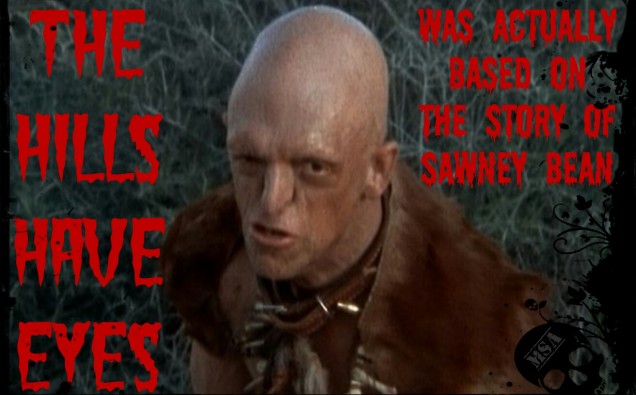 Scotland’s most gruesome legend is the story of Sawney Bean and his family of incestuous cannibals. Said to be responsible for as many as a thousand murders, the tale of Sawney Bean inspired several movies, including Wes Craven’s The Hills Have Eyes.

Alexander Bean, nicknamed Sawney, was born in East Lothian, near Edinburgh, Scotland. His father was a ditch-digger and hedge-trimmer, and young Sawney initially followed the same career path. However, he found it ill-suited to his lazy, brutal temperament and decided to pursue less honest means of making a living.

Sawney Bean found a woman who was as vicious as he was and the two of them moved into a cave on the southwestern coast of Scotland, located in Bennane Head between Girvan and Ballantrae. To support themselves, the pair began robbing travelers they encountered on the roads at night. They murdered the victims of their robberies afterwards, to ensure that no witnesses would survive to tell the tale.

As time passed, the family grew. Sawney and his common-law wife had eight sons and six daughters, as well as 32 grandchildren…all of whom were the product of incest. The Bean clan lived in isolation in their lair on the rocky coast, only interacting with outsiders in order to rob and murder them. They were never seen in a city or village, and local residents did not even know of the Beans’ existence.

But how to feed so many hungry mouths? Horrifyingly, the Beans turned to cannibalism, eating the bodies of their victims. They killed so many that they devised ways of preserving the flesh of these corpses, pickling them and smoking them. Less palatable portions of the bodies were thrown into the ocean.

The numerous disappearances of travelers, and the occasional washed-up, fish-nibbled body part, attracted the attention of law enforcement. Several innkeepers were thought to be responsible for the murders, since their inns were the last place that the Beans’ victims had been seen. But executing these innocent men did nothing to slow down the rash of disappearances.

Finally, King James himself launched a search for the culprits. A search party of 400 men and a team of bloodhounds scoured the area where the disappearances had taken place. The dogs zeroed in on the entrance to the Beans’ cave, which had been noticed by a previous search party but not explored, as no one thought people could actually live in such an inhospitable place.

The bloodhounds led the search party deep into the cave, where a grotesque sight awaited them. Piles of jewelry and clothing looted from the bodies of those murdered by Sawney Bean and his family littered the floor. Severed body parts hung from the roof, smoking over a driftwood fire. Huge vats held pickled human flesh. Dismembered human remains were everywhere.

The Beans were immediately taken to Edinburgh and executed without trial for their grisly crimes. The men had their limbs and genitals severed and were left to bleed out slowly, while the women looked on. Afterwards, the women were burned alive in three large fires.