The Green Inferno: Welcome to the jungle! 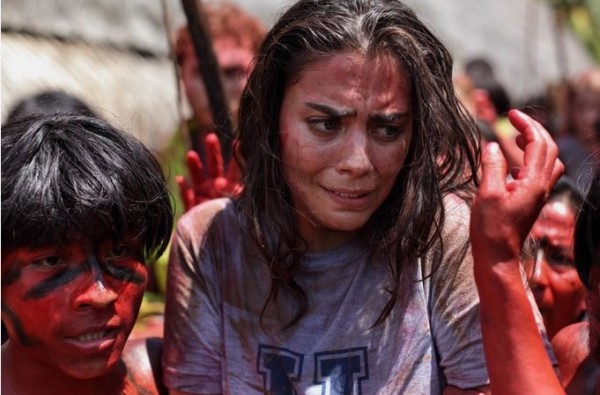 The long anticipated cannibal movie has finally made it’s travels to Blu-ray earlier this month. (Yes pun intended.) Horror guru Eli Roth has showed once again that perhaps staying home might be the safest option in his latest entry, The Green Inferno, co-written by Guillermo Amoedo.

I had the pleasure to see this film last September in New York city during Eli Roth’s Appreciation Tour. After the two year wait I was not disappointed. The movie is beyond awesome! How genius is this, to make a movie that pokes fun at slacktivism. (Defined in detail on urbandictionary.com.) How people in society want to seem like they are making a change in the world but in reality are not doing much of anything to make things better. At lease these students went to The Amazon and risked their lives to save the tribe. 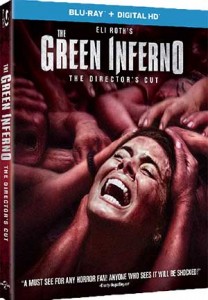 The movie begins with our naive but very likable protagonist, Justine (Lorenza Izzo) wanting to join a social activism group on her campus. They are protesting against a timber industry that is destroying the Amazon rain forest, in hopes to save a tribe that has lived there for thousand’s of years.

Besides being disturbed and grossed out after learning about female mutilation in her college class, it seems that Justine is less interested in social activism and more interested in getting closer to the charismatic leader of the group, Alejandro (Ariel Levy). 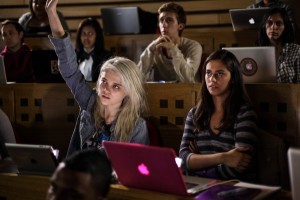 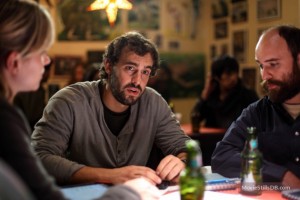 Justine’s best friend Kaycee is welled played by grunge singer-songwriter Sky Ferrira.  Kaycee is the typical college student who just doesn’t care about saving the world and isn’t impressed by Alejandro. In fact She tries to warn Justine that Alejandro is, as she put’s it,  “Someone you need to look out for”.  I thought Kaycee best line was “The only thing those posers care about is looking like they care. It’s just a mere demonstration to appease their f-king white stupid suburban guilt”.  It perfectly summed up what she thought about activism. 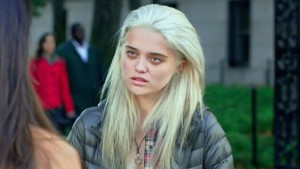 Justine won’t even listen to her father (Richard Burgi), who’s an attorney for the United Nations, that these countries are not necessarily the safest and that you can’t just change things over there all because you don’t agree with what they are doing. Justine is positive she can make a difference and with that she is flying to the Amazon with her group. The protest goes as plan and they do stop the bulldozers. It’s the flight home where things go awry and they end up crashing near by the very same village they were trying to save. The natives view the would be activism group as a threat and if things couldn’t get worst, they still practiced cannibalism. Movies like Cannibal Holocaust and Cannibal Ferox will come to mind and that is not an accident since The Green Inferno pays homage to them. 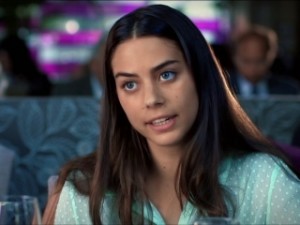 There was plenty of carnage when the plane went down. Three passengers fell out, one passenger broke his nose on a glass bottle, the pilot and co-pilot were impaled by tree limbs and Jonah (Aaron Burns) got sick all over himself. Amy (Kirby Bliss Blanton) is still worried about being in small planes. Justifiably so. Amy, in case you didn’t know, the big ones go down too. They just make a bigger BOOM!! 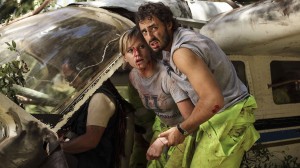 It’s a fast movie, the viewer doesn’t get much time to to think about what they are seeing. I loved how the kill scenes were extremely detailed, bloody and in your face. The first death is not for the faint of heart and it is actually the goriest kill in the film.  I was actually relieved that some of the scenes that are shocking were showed off screen, including a very disturbing scene that includes a tribeswoman inserting a wooden claw-shaped tool into the women’s vaginas. A lot is implied and showing less is more effective then showing everything.  We get the gist and those scenes are nicely done. Greg Nicotero from the Walking dead did a lot of the effects. 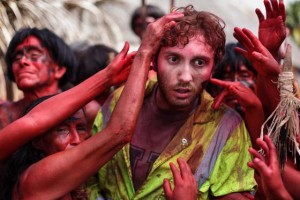 Flawless camera work illustrates the beautiful landscapes of Peru and Chile.  Those were my favorite parts of the film. I felt like I was in the jungle. An interesting factoid is that Lorenza Izzo almost drowned during one of the her scenes. The condition changes in the river shows how unpredictable filming in the jungle can be and the challenges and hardships involved in taking on this perilous task. I liked that the villagers were not actors but authentic tribesmen and women. The two main cannibals were very scary to look at. Some viewers have described this movie in the terms of a documentary. Learning about the villagers, customs and daily duties, and we see how our “visitors” factor into their daily rituals.

If you have seen Aftershock, some of the cast members will seem familiar. Lorenza Izzo (Aftershock, Knock Knock) who played Justine, was amazing and basically carried a lot of the film with her big expression-ate eyes. She goes from being a victim to being a warrior. I was rooting for her all through the film.  Ariel Levy (Aftershock) who plays Alejandro, is the most unlikable character I have seen in a long time. I wanted to feed him to the cannibals. Ariel was very effective as the leader of the group who will do anything for more followers for his cause. Daryl Sabara, Aaron Burns, Kirby Bliss Blanton, Nicolas Martinez, Magda Apanowicz and Ignancia Allaman round out the rest of the cast and the menu for the cannibals.  They all did well with their roles. 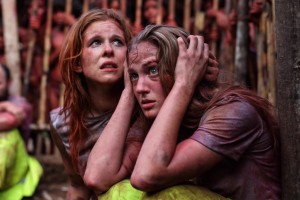 There is plenty of humor that eases the tension throughout the film. I actually enjoyed it and did not find it distracting. There is a funny scene that includes one of the main characters in a uncompromising position with a tarantula. That same character found out what happens when you get cannibals high. Let’s just say it doesn’t turn out well.

My final thought is this a suspenseful adventure tongue-in-cheek horror film with a commentary message that will stay with you long after the film is over. Bring on the sequel!

Lets talk about the blu-ray. I was pretty impressed with it.