The Horribly Slow Murderer with the Extremely Inefficient Weapon. 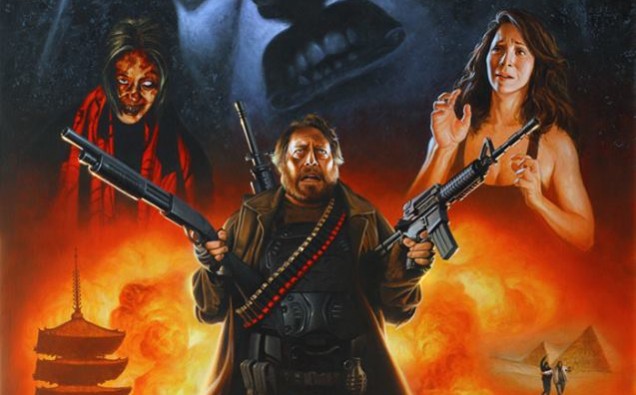 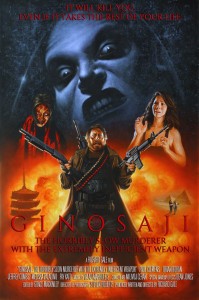 The greatest movie you will ever see about a strange demon creature thing trying to kill a man with a spoon.

I watch a lot of cheap movies… I mean films made for less than a thousand dollars… And a lot of the time you have to give a lot of … forgiveness to financial shortcomings. Granted many of these films that I see are feature-length and their directors are under serious time constraints to finish the film in time to pay their rent. 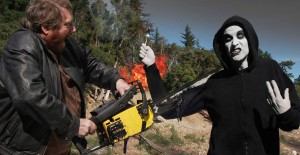 The angriest mall-goth tree getting cut down by lumber jack.

“The Horribly Slow Murderer with the Extremely Inefficient Weapon” is a short granted, but it is a stroke of genius, it shows you what you can do with a camera and $600 dollars and that is to make a film that looks like $20,000 was spent on those 10 minutes. Well, 10 minutes 17 seconds.

This film is one of the funniest shorts I’ve seen hands down –mind you it is a preview for a nonexistent film, which now turned into “let’s make the feature-length” and has a Kickstarter. The story of a forensic medical examiner played by Paul Clemens, chased by an extremely slow murderer (The Ginosaji) who is repeatedly hitting him with a spoon … over and over and over… No matter where he runs, no matter what he does, his tormentor follows … spoon in hand. The Ginosaji the tireless tracking killer is a mix between “Ghostface” and Fester Adams. The Ginosaji has about the speed of Michael Myers… and also his tireless and perfect tracking ability… only his choice weapon is the spoon. Brian Rohan who plays this guy better be ready to sign a whole lot of autographs at Comic Con in the next 5 years is all I’m saying. 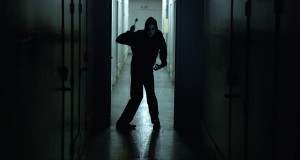 It’s one thing to technically make a “good film,” another to make it for under $600 and yet another to actually have a well-written script that has solid acting all the way through. And everything just works in it and does it’s meant to do which is make you laugh and it does. Made on such a shoe string budget you can tell this filmmaker had a vision that he brought to life and did it exactly as planned. 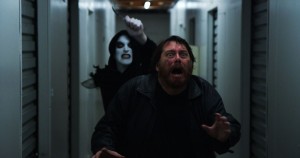 Now the film has close to 30 million views on youtube.com and is doing really well as a short -in fact they just got a nod from the Tribeca Film Festival as “New Favorite Kickstarter” which I can tell you once you see the short you’re going to want to see the feature-length. 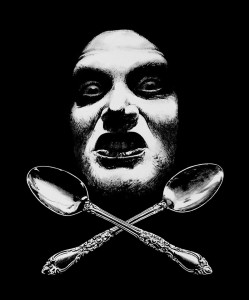 Original idea for the Jolly Roger rejected by Capt. Morgan.

If you’ve seen the short give to the kickstarter here: