The Horror of HANGMAN

I usually don’t tend to get overly excited about found footage films, but like any true horror fan, I pretty much will give anything a shot, especially if... 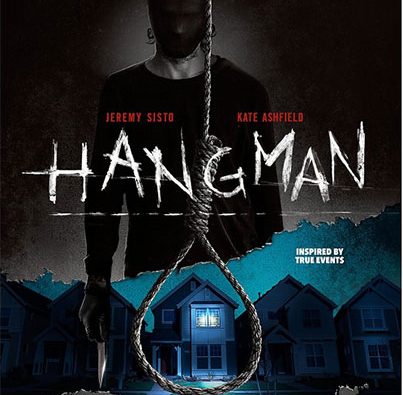 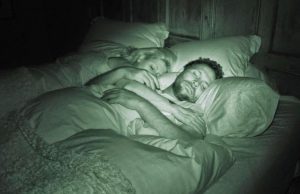 I usually don’t tend to get overly excited about found footage films, but like any true horror fan, I pretty much will give anything a shot, especially if the release shares the same Distributor of other films I enjoy.  As I was visiting my local movie resale shop, I happened to come across a copy of Hangman, directed and co written by Adam Mason, with Simon Boyes lending talented creativity on the script.  Scanning the back of the blu ray, I remembered seeing a trailer for Hangman sometime last year, and marked the movie in my book of memory, as it seemed very interesting to me.  I also noted it was from Alchemy, who brought us the impressive werewolf flick Howl and the disturbing Charlie’s Farm.  So it was an easy decision for me to go ahead and make the purchase, and I am so damn happy I did.

Starring Jeremy Sisto ( May, Hideaway ) who also helped produce the film and Kate Ashfield ( Shaun of the Dead ) this found footage fright definitely raises the bar for the sub genre.  Eliminating the shaky, unfocused camera work which aims to imply amateur cinematography skills and authenticity, Hangman delivers a well paced and tension filled story of a deranged mans obsession with a family, namely the wife Beth, played by Ashfield.  His evil escapades begin at the airport, as he sits in his vehicle zoning in on the Miller family about to embark on their family vacation.  The unnamed. unstable man records the happy group of four collecting their luggage and making their way to the terminal, joyful and unaware that their home address is about to be accessed.  He breaks into their car, then gaining it’s GPS information for the location of the Millers house.  This crafty and ominous move is recorded as well, as is just about everything the man does during the film.  We then see him drive in his own car, to the families homestead, breaking in and in very creepy ways, making himself feel right at home.  The film immediately becomes unnerving, as we witness the intruder significantly connecting with the family in his own sick, demented ways.  He watches home videos of the parents and their two children Max ( Ty Simpkins ) and Marley ( Ryan Simpkins ), looks through photo albums and rummages through their personal effects the entire time the Millers are away on vacation.  Strategically placed video cameras are set up around the house, as the man makes a small hidden base camp inside the attic which allows him to monitor the activities within the home.

There are seriously sinister, yet subtle insights into just how disturbed the intruder is during the film, and I thought these added great character depth, as well as enhancing the uneasy tone.  Actor Eric Michael Cole convincingly demonstrates psychotic tendencies in the portrayal of the Miller family stalker.  Time passes, and eventually the family returns from vacation, to find their residence trashed.  Literally every room is tossed into disarray, with careful attention to leaving out certain items intended on causing discomfort, embarrassment and unanswerable questions.  The freaky man now hiding in the attic of their home watches, with immense interest, the different family members reactions to the fact their privacy and security have been shattered.  He is studying the behaviors of each, to help guide him in implementing the most effective way to terrorize the innocent occupants in the coming days.  I must say, he was wildly successful with this effort, in addition to exhibiting an uncanny sense of being completely comfortable in the victims home, even when they are present.

Hangman doesn’t rely on jump scares and gratuitous gore to frighten viewers.  Nope, it does something ten times scarier in my opinion.  The outrageous and complex criminal activity the intruder displays is apparently inspired by real events.  The thought of someone akin to the sicko portrayed in the film, actually engaging in similar behaviors, and a real suburban family succumbing to a fatal showdown with this dude, sends shivers up and down my spine.  Shit like this, really does go down, and that right there is almost enough for me to construct a panic room.  The masterful, premeditated mindfucks the crazed home invader presents are near genius, but as his mental state deteriorates, and his need to personally engage the mother become overwhelming, he has no choice but to give in to his dark, twisted desires.  The filmmakers made one hell of a thriller, playing upon the commonly shared fear of losing the feeling of safety, security and sanity all within your own home.  Wonderful editing, talented actors, and the extremely engaging story aided in ensuring I find this cinematic adventure enjoyable.  Hangman greatly surpassed my expectations, and actually creeped me out a bit, causing to me to double check that my apartment was secure.  To my delight, my abode was in fact all locked up, and this addition to my horror collection was not one I regretted.