The Most Controversial Movie Ever Made: A Look Back at Cannibal Holocaust

Before Watching the Green Inferno, Check Out The Classic Film That Inspired It 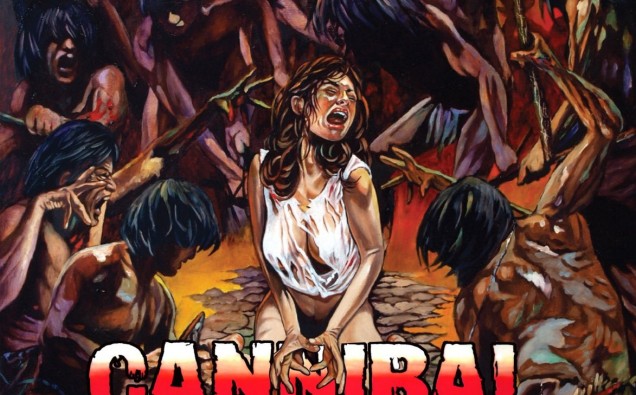 In the history of exploitative cinema, no film has ever quite packed the gut punch of Cannibal Holocaust. The most well-known and arguably the best film to come out of the cannibal sub-genre, Holocaust is the very definition of horror, the type of stuff nightmares are made of. Everything awful thing you can imagine is present: graphic violence, rape, dismemberment, animal cruelty, all the stuff nightmares are made of. Banned by numerous countries and landing the director in hot water in his land of Italy, Cannibal Holocaust didn’t make so much of a splash as it did a tsunami. But oh my, what a movie!

Other than the extreme violence, Cannibal is most famous for starting the found footage genre, a full 19 years before The Blair Witch Project. The films first half follows Professor Monroe as he enters the Amazon in an attempt to find a lost documentary crew. This chunk of movie plays out like a somewhat grislier Crocodile Dundy, complete with shirtless vests, big ass machetes, and faster paced action.

Its  the second half of the film that made Holocaust so famous, showing what remains  of the deceased and digested crews footage, and goddamn is it fucked up. Shot on a handheld camera, the footage is grainy, nasty, hard to look at but even harder to look away from. After having recently re-watched the film in close conjunction to war footage from Vietnam, the similarities between the two are disturbing pronounced. Holocausts director Ruggero Deodato actually thought up his movie while watching violent news media on television. In his opinion reporters had given up journalistic integrity, staging events and focusing more on graphic gore than facts.

Thus was born the Cannibal Holocaust news team, one of the nastiest groups of people in movie history. Throughout their time on screen they rape, murder, and steal with impunity, acting more savage than the natives they film. And while the nature of their fate is satisfying (spoiler alert: their in a film with Cannibal in the title), their complete horribleness and one note personalities makes the scenes where their not being tortured and eaten an interesting watch, where I found myself rooting for the tribe over the film makers.

But in truth, while there are some poignant points on race relations and the nature of savagery, no one watches Cannibal Holocaust for the story. The violence is extremely and brilliantly obscene, with the bright red blood and and torture of a Hammer film, the excessiveness of an Italian genre picture, and more nudity than a softcore porno. Everything than made Cannibal Cinema great, without most of the stuff that made it suck, Holocaust proved to be the best exploitation film ever made, a title it still holds some 35 years later. I’ve seen Gumbo, A Serbian Film, Salo, and a thousand other movies often stated to be the most disturbing, and none of them hold a candle to this film. 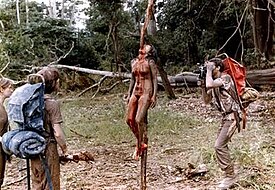 In truth though, if one element goes to far, it’s the actual murder of animals. A total of six animals are killed on screen, the worst being a tortoise flipped on its back, legs kicking frantically as it is gutted. The world often, for whatever reason, tends to give more of a shit about animals than humans, but in this case it’s justified. None of the humans (and there are many) killed and eaten in Cannibal Holocaust were real; that tortoise was. That was it’s actual blood draining into it’s shell as it died, and no film has the right to do that.

But while the animal cruelty is sickening, it doesn’t change the fact that Cannibal is a classic. Innovative for all the right reasons, if you have the stomach for it, Holocaust is nothing short of a masterpiece.