An Interview With Speed Machine and Europaweite Aussichten 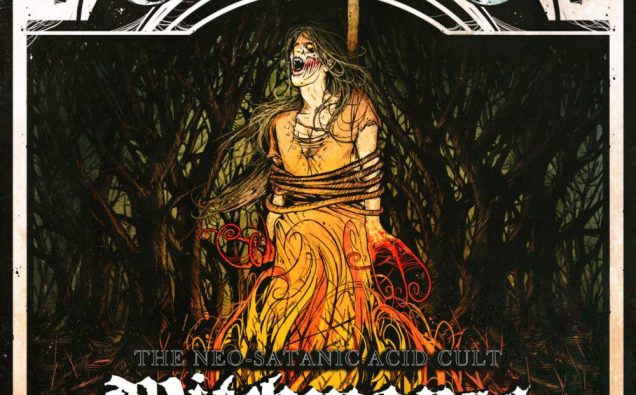 The Neo-Satanic Acid Cult is a collaborative effort between synthwave artists Speed Machine and Europaweite Aussichten. This release has been in the works for a year, and dropped just in time for Halloween 2016. In this interview I chat with the duo about their influences, collaborative process, and more. For your listening pleasure, I’ve embedded this Halloween synthwave album below so you can listen as you read!

Thanks for chatting with me! It was great to have you both on Hear the Living Dead, you both crushed it with some killer tracks! And I was a huge fan of your debut as the collaborative duo the Neo-Satanic Acid Cult. Awesome name, great blend of epic tunes, and incredible artwork. Who did the artwork, by the way?

Europaweite Aussichten: The artwork was done by Mesozord. He’s an artist from Italy and he did the cover art for my last record Purgatory. So he was the first one I had in mind when we talked about the artwork for Witchwaves.

So how did this collaboration come about? And what are some of your biggest influences and inspirations, both as individuals and as a duo?

Europaweite Aussichten: I don’t remember exactly how it came about because it was too long ago. Maxime and I know each other for two or three years now. We are constantly writing on Facebook since I released my first pieces of music. He became a good friend and one day we decided to make music together. First thing we did was a track for my latest EP Night Sequences. Around the same time we started doing Witchwaves. We wanted to do an EP for Halloween.

How does the collaborative process work between the two of you? Do you use the same digital audio workspace? How do you go about starting and finishing tracks?

Europaweite Aussichten: It was different on every track. We constantly sent new ideas to each other and talked about it. In my case it was just pure chaos. I had done so much stuff. Just too much! So I had to pick the best ones. We wanted to combine different elements. On one hand, the EP should be very dark. That was more Maxime’s part. I’m responsible for the more funky and cheesy stuff.

This question is for Speed Machine. I understand you’re a good deal through your first album. Wanna give the readers a bit of info on what to expect from Speed Machine’s debut album? And what was your experience like working on the two recent compilations, while also juggling your debut album recording and this release with Sam?

Speed Machine: Yeah of course man! In fact, this will be an EP, something like 5 or 6 tracks long. Originally, I wanted to release the EP last year. But after I listened to it many times, I decided to put it off, because for my first EP I wanted something good and unique! So now the EP is over and ready to be unleashed. It just needs to be mixed and mastered. This part will be done by my good friend Absolute Valentine. The EP will be named Dead Racer and through the music there is a story behind this! It takes place in a futuristic world and after a fault of the space time. Some cybernetic creatures came to earth and after a long war, they killed the leader of humanity. After some scientific experiences, he came back to life with only one goal: exterminate the evil! The EP has some kind of cyberpunk vibe. It sounds like a video game. I really hope people will enjoy it!

When Sam and I decided to work together on a side project, I was in the middle of making Dead Racer. But all went well! Someday I was more focused on Witchwaves and the other day on Dead Racer. I have succeeded to juggle with the two different projects! . For Hear the Living Dead, I was contacted lately by Jean Pierre Van Damme. We’re are good friends and he knew how to convince me for making a track. I started to listen to all the old zombie movie scores and after that I began to work on the track, it quickly became Zombie Waves. For the Future Dark Club compilation I had the chance to be select for making an original track just for Halloween. So I did something dark and that was inspired by horror movies from the 80’s.

This question is for Europaweite Aussichten. You’ve been busy! Tell me a bit about Night Sequences, another release you’ve just recently dropped.

Europaweite Aussichten: Night Sequences was one of these projects that was in production for an eternity. I guess I started with it about a year or so. But, you know, that’s all my fault. This year I did so many things at the same time, that everything moved at a snail’s pace. I’m not going to do it again this way. But I really liked how the EP turned out. When I did Purgatory and Night Sequences, I was really into old-school synthesizer music that was recorded on tape. I just loved music with shitty sound quality. So Purgatory became some sort of fake soundtrack and Night Sequences captured the experience you had as a kid, watching all your VHS tapes at night. I don’t know, that was just special to me. It’s late at night, you are maybe ten years old and you are looking for the right movie to watch. You put the tape in your VCR and you just drift away. It’s like swimming in a technicolor ocean. It’s hard to describe to somebody who wasn’t there. I’m lucky to be part of what might be the last generation who watched movies on VHS and listened to music on cassettes. It was more personal. Even when you recorded movies from TV or you made your own mix tape and you wrote the title on the cassettes. Or maybe you painted your own artworks. You can’t replace that with playlists on Spotify.

What is in the future for Speed Machine?

Speed Machine: After the EP I will stop for a bit with making music and start to learn programming synthesizers. Now I want to have my own sounds and try to push my limits! I’m going to release an EP or maybe even an album for the release of Alien: Covenant. I’m a huge fan of Alien, Sam can approve it . It will be a space/darksynth record.

What is in the future for Europaweite Aussichten?

Europaweite Aussichten: Right now, I’m waiting to continue the work on the soundtrack for The Seeker with S.T.R.S.G.N.. After that, I can’t tell you. There are things I have in mind I can’t talk about right now. Vacation would be nice too!

What can we expect from the Neon-Satanic Acid Cult in the future?

Speed Machine: With Sam, we decided to release something with this project only for Halloween. We need to brain storm for the new chapter of The Neo-Satanic Acid Cult. But we’re going to make a track for the new Compilation organized by Jean Pierre Van Damme called “Slaughter Mountain”!

Europaweite Aussichten: Hopefully something great for next Halloween.I really love Witchwaves. It’s a very consistent and straight forward EP. It was a great opportunity to do something different. Something more heavy and aggressive.

Thanks for chatting with me, and if you want to give any parting words, feel free to do so!

You can check out the debut of Neo-Satanic Acid Cult, Europaweite Aussichten, and Speed Machine on bandcamp. While this interview is a bit behind, given the fact this was a Halloween synthwave release, horror music is great year round! And why not get ready for next October and grab this epic Halloween synthwave collaboration right now?!