The Night Ed Sullivan Traumatized a Nation—With a Cartoon

“A Short Vision” has long-lasting impact. 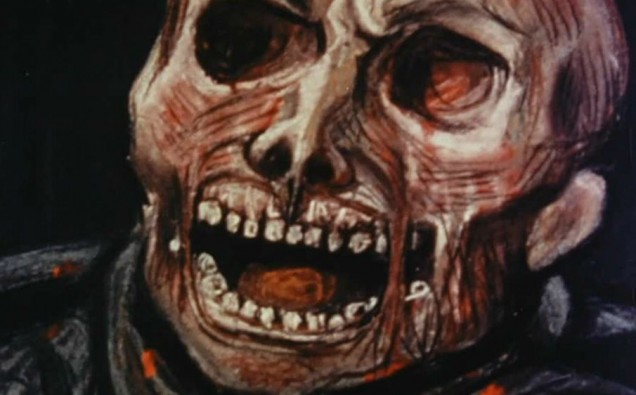 The Ed Sullivan Show is considered one of the greatest TV series of all time; the CBS variety show hosted by entertainment columnist Ed Sullivan ran on Sundays from 1948 until 1971, leaving an indelible stamp on national popular culture. 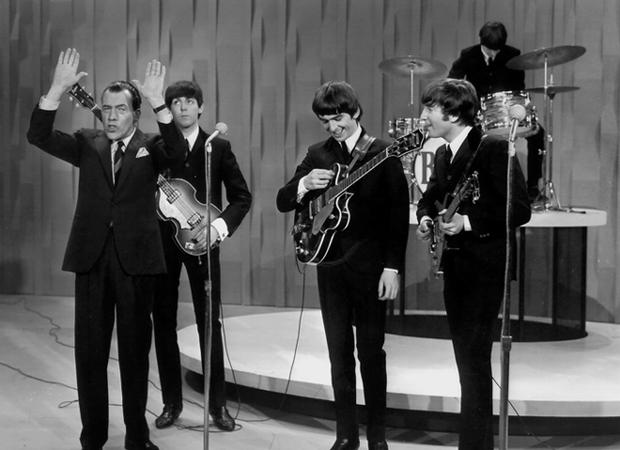 Many episodes of the Ed Sullivan Show have become especially famous and genuinely historic. On February 9, 1964, Sullivan hosted the Beatles’ first US television appearance; that broadcast drew an estimated 73 million viewers—a record at the time. Other noteworthy episodes include Elvis Presley in 1956, The Supremes in 1964, and The Muppets in 1966.

When you’re on TV for as long as Sullivan was, you’re bound to court controversy from time to time; infamous episodes of The Ed Sullivan Show include: An episode on mental illness in 1958, an appearance by Bo Diddly in 1955, an episode in 1964 during which Jackie Mason gave Sullivan the finger—and who can forget the infamous appearance by The Doors in 1967 (immortalized in film by Oliver Stone) when Jim Morrison refused to be censored.

But there’s another infamous episode of the Ed Sullivan show that was so shocking, its traumatic effect left a lasting scar on the American psyche; the date was May 27, 1956. Unbelievable, you won’t find a description of this broadcast on Wikipedia and information on the internet is scant. It’s almost as if there’s been a deliberate effort to erase this broadcast from the memory of history.

A big shout out to the folks at Dangerous Minds for bringing this one to our attention and providing historical context. An article posted on June 12th explains:

In 1952, the first successful hydrogen bomb was detonated, and it was over 450 times more powerful than the bomb dropped on Nagasaki. Horrified at such potential for destruction, Hungarian-British 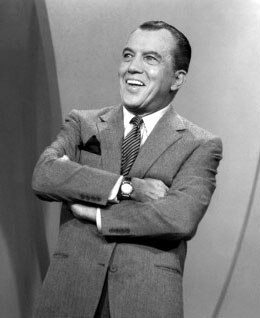 animator Peter Foldes and his wife, Joan, began working on a short cartoon in their kitchen, and in 1956, a short version was aired on The Ed Sullivan Show. Sullivan attempted to prepare his audience for the horror of the film, but his introduction stopped short of warning viewers they were about to watch an interpretation of the nuclear holocaust, completed with bloody melting faces.

Sullivan: “Just last week you read about the H-bomb being dropped. Now two great English writers, two very imaginative writers, I’m gonna tell you if you have youngsters in the livingroom tell them not to be alarmed at this ‘cause it’s a fantasy, the whole thing is animated—but two English writers, Joan and Peter Foldes, wrote a thing which they call A Short Vision in which they wonder what might happen to the animal population of the world if an H-bomb were dropped… It is grim, but I think we can all stand to realize that in war there is no winner.”

When folks at home heard “animated” they probably expected something Disney-esque, but instead got something they were utterly unprepared for. Sullivan was later lambasted by critics for airing what they perceived as inappropriately graphic images. 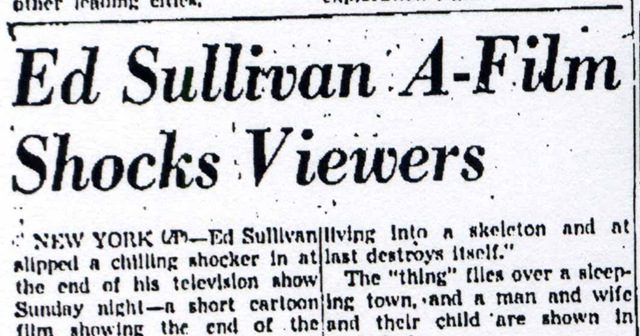 The term “stuff of nightmares” gets tossed around a lot—especially on horror websites. In this case, however, nightmarish is the perfect way to describe A Short Vision. The six-minute short, narrated James McKechnie, is presented in painted strokes, reminiscent of Vincent Van Gosh but washed of all vibrancy. The music consists of a primarily of flute and a child’s slide-whistle, which might be annoying or silly if its understated composition wasn’t so chilling. If you’re ready, take a look at A Simple Vision, in its entirety, below.

The fact that reports about A Short Vision and the night it aired on the Ed Sullivan Show are hard to find doesn’t mean that the effects of this broadcast weren’t felt far and wide. Some of the short’s most disturbing imagery would eventually find itself reimagined, decades later, on a much larger scale.

What struck me after watching A Short Vision for the first time, was that it felt very familiar. I imagined by mother and father as children, watching The Ed Sullivan Show with their families in 1956, and being assaulted by unimaginably violent imagery. Perhaps they passed this shared, ingrained memory into the coding of my DNA in utero. It would certainly explain how, for as long as I can remember, I’ve always had an irrational, near crippling fear of nuclear war.

And then I made another connection: The most striking image of A Short Vision is the melting human face—and this bears a striking resemblance to the climactic conclusion of Raiders of the Lost Ark (1981), when the Nazi’s are obliterated by a powerful supernatural energy-source. I have a sneaking suspicion that if interviewed, both George Lucas and Stephen Spielberg would have to admit having seen A Short Vision in their youths, and that this was at the very least an unconscious inspiration for Raiders’ climax.

A Short Vision was no doubt an influence for the anti-nuclear war horror Threads (1984), the body-horrors The Incredible Melting Man and Body Melt, and many other genre offerings.

While A Short Vision is now lauded as an important piece of art and history, I still think it was a huge risk for Sullivan to broadcast this short nationwide back in 1956—a risk I’m glad he took. In addition to opening eyes to the true implications of nuclear annihilation, this short clearly left its imprint on many creative minds who came of age during The Cold War.

What do you think about A Short Vision? Sound off in the Comments section!