The Original Gore Film: A Look Back At Blood Feast

How Does The Godfather of Gore's First Feature Fare Over 50 Years Later? 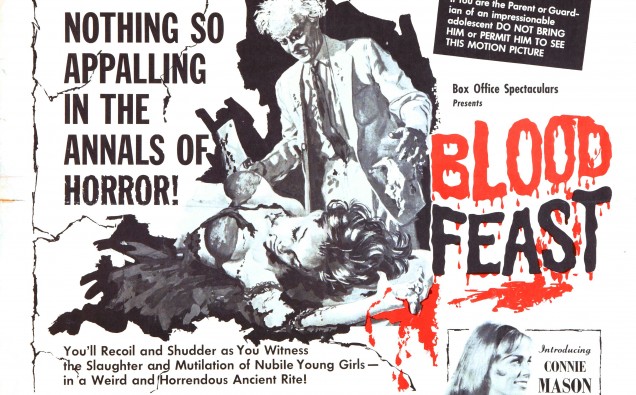 For such an important entry in the canon of horror history, Blood Feast is a pretty unremarkable film. Lousy production values (to the tune of a $24,500 budget), horrid acting, and pacing that makes the 66 minute running time feel like marathoning Lord of the Rings fail to set it apart from the thousands of other crappy, poorly financed horror films being churned out in the 60’s. A cinematic masterpiece it might not be, but Blood Feast is remembered for a reason; the sweet, sweet gore.

Films like Psycho were beginning to bring a new level of acceptability to cinema, but before Feast explicit violence, the real nasty, gooshy kind, had never been a big focus point in a feature film. It’d take a visionary man to make bloodshed into an art form: enter Herschel Gordon Lewis.

Blood Feast was the first to pick up on these similarities, and Lewis milked it for all they were worth and audiences ate the carnage up. Feast ended its run to the tune of a $20,000,000 dollar gross- pretty good for a low budget film in an untested genre. Critically the film was torn to pieces, and even the most forgiving of fans (like me) have to admit the film has serious, serious problems. The acting is hilarious, particularly the silver haired Mal Arnold as machete wielding mad man Fuad Ramses. Casting the part of an Egyptian serial killer with a man who looks like your creepy uncle who got arrested for hanging around the local playground in sunglasses and a raincoat was probably not a brilliant idea.

And as buxom a lass as former Playmate of the Month Connie Mason is, her acting chops have about as much substance as her silicone breasts. But what really kills Feast is the pacing. Using my stopwatch, I clocked in a 4 minute scene of  a man talking to an unseen person on the phone: no cuts, no shot changes, just a man, a phone, and my own, slowly decaying mind.

It’s clear there simply wasn’t enough story around the gore scenes, necessitating the endless amounts of padding shown. For better or worse, the entirety of Blood Feast’s story ,about a caterer who cooks up women to satisfy the desires of the Egyptian Ishtar, is inconsequential fluff. Its the 6 kills that take up a majority of the films run time, and all of it’s infamy. 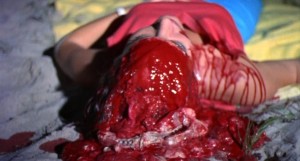 Compared to today’s standards, this isn’t the most shocking film ever released, but at the time it was scandalous. Legs were are sawed off and cooked, backs are whipped to ribbons, heads are cut open with the brains removed, tongues are torn from mouths, and crimson blood flows like wine: even in these modern jaded times, its a cringe-worthy endeavor. Vomit bags were handed out at some theaters and it’s easy to see why. Nothing on this level had ever been seen in theaters before.

For all its festivities, Blood Feast is a film where, for the most part what you see is what you get: pretty decent gore, horrible acting, and endless scenes of people crying and on the telephone. This wasn’t Hershel’s finest film, not by a long shot, but for all it’s flaws this is still a pretty entertaining movie ,and ample use of the fast forward button makes it even better. Watch it for the history, love it for the gore, and chow down on one of the most influential pieces of celluloid ever put to camera.

Jeff is a writer for The Blood Shed and eats, drinks, and breathes horror. You can help him publish his first book here