Prac FX and a great killer make this slasher a must see for fans! 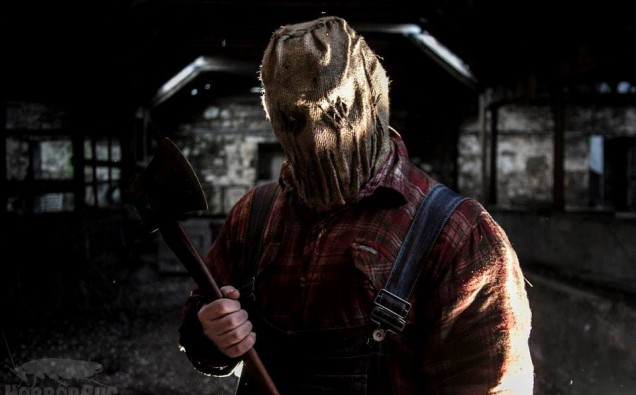 I had a chance to screen the upcoming slasher film The Redwood Massacre yesterday. I love slasher films, favorite sub genre, bar none. So, I was very pleased with this film. Does it break the mold? No, it came across to me as a tribute to slasher films of yesteryear, so the story is one we’ve seen a dozen times. That said, there is a lot of new stuff in there and the old stuff is delivered well. I always hold the final measure of a film to be “was I entertained?” And the answer is a definitive “Yes!”

The plot of the film is as follows:

For five adventurous friends, visiting the legendary murder site of the Redwood House has all the hallmarks of being an exciting camping weekend away. Until the innocent campers discover the Redwood legend is a horrible bloody reality.

Right, so slasher movie about an urban legend come true in the woods, bunch of campers get slaughtered, you know the tune. Well, it may start out by the numbers, but actually gets out of the woods setting fairly quick. See, much of the film actually transpires in the killer’s home, which is in the woods. So, rather than the whole movie going the Friday the 13th, Hatchet, or Mad Man route, we actually get a good mix of environments. Then, too, there is a lot of unique ideas. For example, I won’t give anything away, but there was a very novel method of finally dispatching the killer at the end of the film. I also applaud how the supernatural elements of the film are kept to an undertone, merely hinted at but, to me, definitely present.

The acting was never below acceptable. In particular, I very much enjoyed the body acting of Benjamin Selway, who played the killer. When I brought it up to writer/director David Keith, he mentioned that Benjamin is not actually an actor, just a horror fan. This makes me think that he is intentionally going for the Kane Hodder Jason look with his movements. He pulls it off very well, the character constantly exudes pure rage.

I am also always a stickler for effects and this films brings the goods. All practical fx and all done really well! I was especially pleased with the quality of blood used. It was very dark and thick and just looks great on screen! They use just a ton of it and with good reason. When you have access to something that high quality, flaunt it. I hate watery, pinkish or orangish blood in movies. It’s the little things.

Overall, great film! A definite must watch for any fan of the slasher genre! I personally hope for a sequel!