The Ring vs The Grudge… via Baseball!

When Sadako takes the mound, will Kayako and her son be able to stand against her? 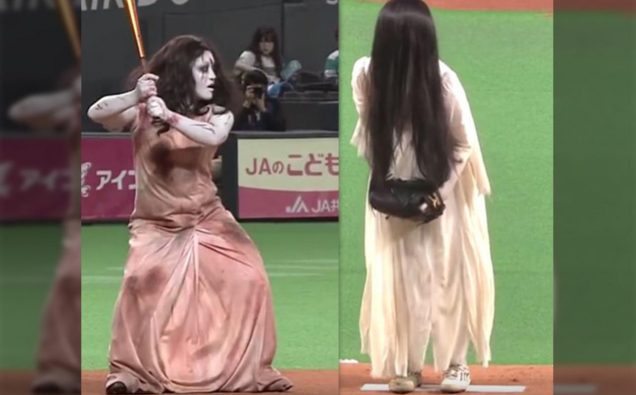 Gotta be honest, I am not a huge sports fan. Just never got into it. But, I will hazard that perhaps if the games involved, say, Ash vs Jason in a game of basketball or Michael Myers vs Maniac Cop in hockey maybe, just maybe, I’d have gotten into it more. Well, Japan loves baseball and they decided to promo upcoming crossover film Sadako vs Kayako (that’s The Ring and The Grudge respectively, or Ringu and Ju-on in their original versions) at a game. I don’t know which is weirder… That Sadako pitched the opening ball to batter Kayako or that this is actually not Sadako’s first time making the opening pitch for a Japanese baseball game. Seems the drowned lass has a killer fastball… get it? But I digress, yes, Sadako has made opening pitches before (her first time was a game in 2012), but never to her opposite Kayako. When the two undead Japanese horror icons face off at the plate, will Sadako’s pitch be hit out of the park? Or will Kayako, mighty Kayako, be struck out? Find out in this vid below!