The Science Fiction Armory: Part One

A look at some of the majestic weapons used in science fiction. 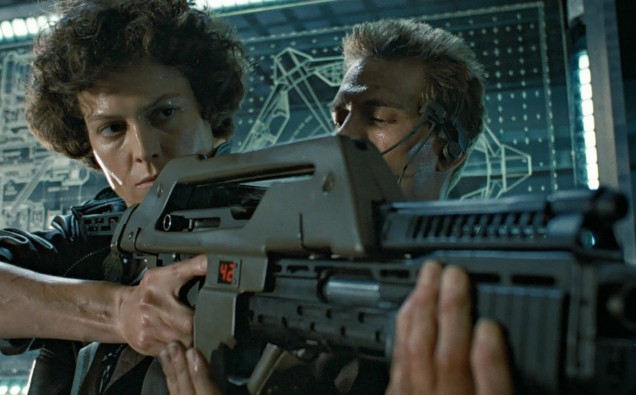 The science fiction genre has brought us some of the most righteous and innovative weapons ever showcased in film, novels, and video games.

Here are some of my favorites. 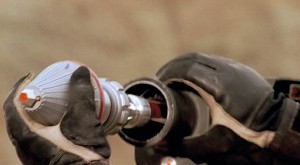 Starship Troopers showed us what it would be like if Earth was destroyed, and the fight had to be brought to the source in outer space. When dealing with giant alien bugs, especially their nests, you need more than just a hand grenade. This modified RPG packs enough punch to devastate a mountain.

Check out this video of the Mini-Nuke in action. 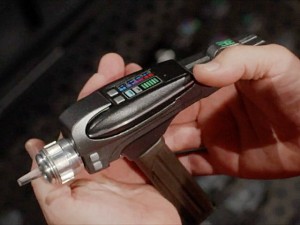 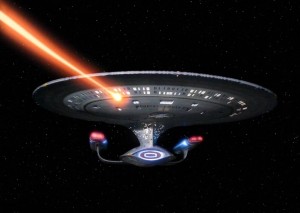 This directed-energy weapon first appeared in the original Star Trek series, and has either been used, or referred to in all later Star Trek films and television spin offs.

The Phaser comes in a variety of sizes, ranging from small enough fit inside your hand, to large enough to be mounted on a ship.

The beam of the Phaser can be adjusted in both width and output allowing the user to blast a target with a desired power setting. With a handheld Phaser, you can choose to stun a living organism, or vaporize them. The beam may also be adjusted to strike multiple targets at the same time, used as a cutting torch, cause an explosion, or even warm something up.

A ship’s Phaser can destroy incoming missiles and asteroids. It can also be set to overload and build up a force chamber explosion that will destroy most natural objects within range. With a simple adjustment, it could stun an entire city of people.

Here is a video displaying the multiple uses of a Phaser. 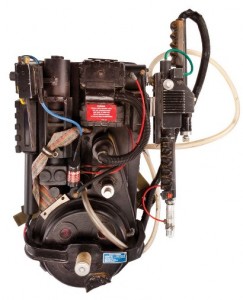 Ghostbusters may be a comedy/horror movie, but the primary weapon used in the film is every mad scientist’s dream!

The Proton Pack was your basic particle throwing wand, except it was attached to a backpack sized unlicensed nuclear accelerator.

Its main purpose was to fire a stream of protons that polarized the ghost’s Psychokinetic energy just long enough to trap it. Once the pedal operated trap closed, the ghost was held for safe keeping until released into a Ecto Containment Unit.

Check out this hilarious video of the Ghostbusters in action with their Proton Packs when they finally catch the pesky and elusive Slimer. 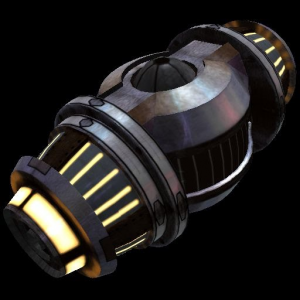 In an attempt to take out Obi Won Kenobi, Jango Fett dropped a few Seismic Charges into an asteroid field. This sonic mine contains liquid Baradium, the element used to create some of the biggest explosions in the galaxy, along with a highly volatile gas.

Once detonated, the weapon produces an implosion of energy that creates a sphere, vaporizing everything within it. The fusion reaction then expands into a powerful energy wave laying out enough collateral damage to crumble an asteroid.

Check out the Seismic Charge (and even a few other clever weapons) being used in this iconic scene of Star Wars Episode II: Attack of the Clones. 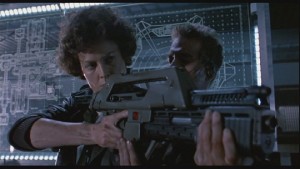 This rifle is a legend in military science fiction culture. It defined the Alien franchise, multiple first person shooter games, and has many variants.

In the sequel to Alien, Ellen Ripley (Sigourney Weaver) returned to the planet where she first encountered the Xenomorph.

Accompanied by a heavily armed United States Colonial Marine Corps unit intent on destroying the creatures, the M41A Pulse Rifle was the weapon of choice.

The M41A Pulse Rifle is an air-cooled, pulse action, selective fire assault rifle manufactured by Armat Battlefield Systems. It first entered service with the United States military in 2171, and was the primary infantry weapon used by both the Marine Corps and the Army throughout the 22nd century.

With a 99-round magazine filled with 10x20mm armor piercing bullets with explosive tips, this devastating weapon was also fitted with an under-slung pump action grenade launcher.

This unique weapon has actually inspired people to build their own version of this gun.

Check out this video of a real custom built M41A in action.

What are some of your favorite weapons from science fiction the genre? Let us know in the comment section below.