The South Will Rise Again: A Look Back At Two Thousand Maniacs

"Old Robert Lee Broke His Musket on His Knee" 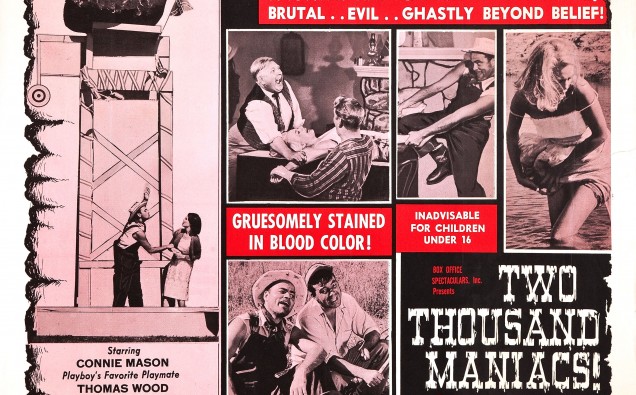 Growing up in West Virginia, i’m fairly familiar with Southern culture. While not everyone in my state is a banjo playing inbred, there are more than enough of them to go around. And again, while this is a broad generalization, many of these hillbilly folk have a lot in common. They spend their lives with Confederate flags mounted on their pickup trucks, cowboy hats and trucker caps pulled over their greasy mullets, and loving nothing more than mudding in four wheelers and letting out a howdy “YE-YE!”

These redneck would be rebels have entered pop culture hard enough to form their own genre of southern fried horror, which all typically feature a couple of things; hillbilly murderers, a few catchy country tunes, and enough Yankee scum for Jim Bob and all his youngin’s to take a shot at. Two Thousand Maniacs was the very first of these films.

The second feature in Godfather of Gore Herschel Gordon Lewis’s “Blood Trilogy”, Maniacs makes up what it lacks in straight up nasty violence with originality, creativity, and some serious laughs. Compared to the guiltily entertaining schlock fest that was Blood Feast, Two Thousand Maniacs is on a different, if still imperfect, level.

We open the film on the hundredth anniversary of the Civil Wars conclusion as the small town of Pleasant Valley celebrates the best way rednecks know how; beer, banjos, and confederate flags. But just as the party heats up, Six Yankee tourists roll into town. Although at first greeted with hospitality, its not too long before the tourists feel something is amiss. And that’s when the Pleasant Valley citizens let open a can of Southern fried torture on their asses. 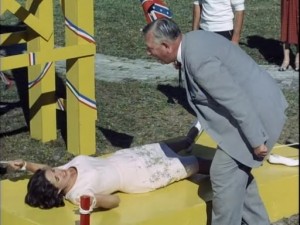 One of the grisly machines used on the kidnapped tourists

For a Herschel Gordon Lewis film, Two Thousand Maniacs blood lust is rather mild. There’s a couple of memorable, painful looking scenes (my favorite involving a roll down a hill in a barrel full of nails), but much of the footage cuts away from the really grisly stuff. When compared to Blood Feast, which had an almost obsessive fixation on its gore, Two Thousand Maniacs seems a bit tame. While it uses the rednecks torture devices as centerpieces for the story, Maniacs is not a movie designed solely to wet the gore hounds muzzle. But in spite of its hokey atmosphere and lack of graphic blood shed, this is a chilling film.

As anyone whose read Shirley Jackson’s masterpiece The Lottery will tell you, mob rule can be a terrifying thing. When surrounded by their peers, people posses a boldness they don’t on their own. Sometimes it as harmless as the group of high school bitches who make Fat Amy cry when shes get thirds on taco surprise day. Other times, it can lead to murder.

The second case is the one on display here as each poor Northern faces their end via boulder, horse, and whatever else these confederate loving sons of bitches can think up. Looking at the rednecks themselves during these scenes provides even more insight. These folks aren’t just enjoying their murderous spree, their loving it. Gap toothed smiles from men, women, and children are a common site as each victim meets their end.

While the premise and underlying themes are as strong as Herschel Lewis Gordon has ever produced, in the end his film making skills are far from Hitchcock. Technical and pacing issues abound, with scenes still tending to drag on too long,a confusing jumbled mess of an ending, and acting that wouldn’t be out of place on a Spanish soap opera. Recasting Playboy model Connie Mason, who did f**king awful in Blood Feast, was probably not Herschel’s best creative decision. But aren’t these this kind of films charm? The complete ineptitude with which their made is what makes them so damn memorable.

Once again, a entry in the “Blood” trilogy has proven to be an extreme influence in horror history. Every scary movie featuring an overall wearing, dip spitting hillbilly killer owes Two Thousand Maniacs a pat on the back.  Sure, it isn’t the perfect film, but there’s still a whole damn lot of fun to be had here, and in the end, thats what really matters.

Jeff is a writer for the Blood Shed and eats, breathes, and bleeds horror. You can help him publish his first book here