‘The Strain’ – Season 3 is more bloody and complex than ever

There will always be evil in this world... 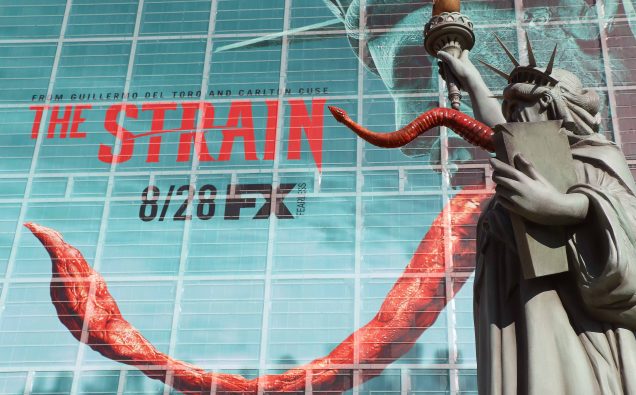 Since I never have time to really give complicated TV shows the attention they deserve, I have had a habit of skipping them, if I can’t do them justice. But two seasons ago, when I saw the trailers for The Strain, I had to watch it. First off, I had tired of how all vampires seem to be portrayed beautiful. How can vampires that are decades old stay so beautiful? As a horror fan, I prefer them to be monsters, with much deeper characters than the Twilight type of vamps. The Strain gave us that and more, telling a story of ancient creatures, called the Strigoi, using myths about the vampire culture that have developed over hundreds of years. These are not pretty vampires, that awaken your sexuality or sparkle. They do not bite your necks. In Guillermo Del Toro’s story the vampires in question literally shove their, for lack of a better word, tongues down your throat. It’s crazy to see and seems to be very effective. The acting from the entire cast is amazing and I was hooked on the show from day one. In the very first episode, we saw delivery of The Master on a plane that landed with everyone on board dead. That was seriously cool!

So you haven’t seen The Strain yet? Here is the basic plot. The Strain, co-written by Guillermo Del Toro and Chuck Hogan is a thriller that tells the story of Dr. Ephraim Goodweather (Corey Stoll) who is the former head of the Center for Disease Control in New York City. He and his team are called upon to investigate a mysterious viral outbreak that resembles an evil strain of vampirism. As the strain spreads, Eph (as he goes by) and a team of regular New York City citizens wage a war to save humanity. The show became a hit on FX and now we are moving into Season 3.

So where are we now?  Not much can be said about the upcoming Season 3 without spoiling it for you. New York City is rapidly falling, continuing to burn in the background, and it looks like there is no one to rescue humanity. New Yorkers need to step up and fight or everyone is going to die. The strigoi are evolving, becoming faster and smarter. Last season Eph and his team tried to take down the leader of the evil strigoi’s, The Master, but they failed. The heroes have won some victories, but with many personal conflicts, they are falling apart as a team. Now we find Eph (still drinking heavy amounts of alcohol to cope with the abduction of his son, Zack) trying to improve his failing bioweapon. Setrakian (David Bradley) and Quinlin (Rupert Penry-Jones) are trying to decipher the Lumen, the ancient book they hope will reveal the strigoi’s history and maybe discover a way to kill them. Vasilly Fet (Kevin Durand) searches the underground tunnels with a Navy SEAL team, hoping to find The Master. But, The Master is out for serious revenge. He has an arsenal of new horrific creatures that are even more blood thirsty than the others. They need to find a way to defeat him, while still trying to stop the infection from spreading. Will they become monsters themselves? There are lots of action scenes and the quality of the show as always is beautiful. The story needs to move forward a bit faster and hopefully it will. The show has the potential to be great.

At SD Comic Con this summer, Miguel Gomez who plays Gus summed up The Strain for himself and I think for me too. “To me the show is a huge metaphor. It’s got so many deeper levels, we are facing these monsters, but to me it’s more than just a vampire show. I think it’s about our insecurities, our doubts, the scariest things we are facing now, are manifesting right before us and how do you handle that situation? Are you gonna run, are you gonna fight, maybe fight and die? They touch on, this season, also police brutality. Gus gets picked up by the police and treated badly, which I think is very relevant to what’s happening today with racism. All the things that the show touches on, if you look deeper than just the monsters and being scared, there’s a really beautiful political message I think. For Gus too, he’s somebody that comes from the street, it’s easy to write him off and look at him, ‘oh he’s a criminal, he’s a bad guy.’ But if you really look at the guy and other people that come from the struggle, they are not all criminals. Sometimes they are victims of their circumstances, and they are actually good people, with a lot of integrity and if you give them a chance they can actually make it out. That’s what I take away from my character the most, is to never quit, keep fighting, you know what I mean?”