From the creators of Lord of Tears! 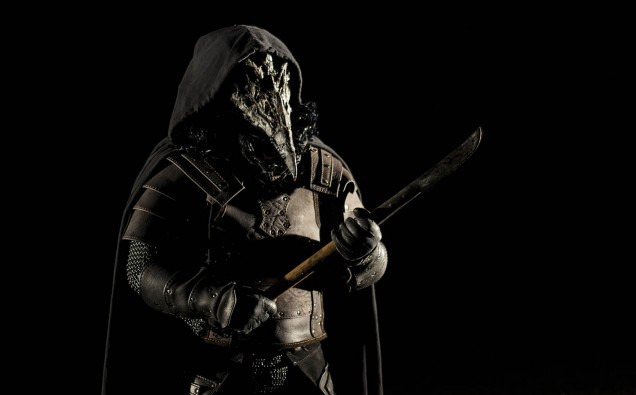 Great news on an awesome horror film. From the creators of Lord of Tears comes another film to feed your fear of birds! The Unkindness of Ravens’ Kickstarter, previously reported on this site, has reached its goal! From the press release:

The crowdfunding campaign for Scottish horror The Unkindness of Ravens has reached its funding goal, making it the most-funded UK horror film ever on Kickstarter!

Over 550 backers have pledged, taking the ongoing campaign past its original £40,000 target. The team have now announced a stretch goal of £45,000, which would see all backers receiving the ‘Raven Arcana’ Digital Book, filled with short stories, tales from the set, raven mythologies and tons of photos and illustrations.

Backers flocked to the project’s beautifully-designed rewards such as the Collector’s Edition 3-Disc Set and the awesome, limited edition Owlman action figure (the Owlman being the breakout star of the team’s last movie Lord of Tears).

With an expected release date of July 2016, the funds raised will now go towards the film’s soundtrack, effects, mix, and marketing, ensuring that this ambitious indie has the best chance of being seen by the widest audience possible.

Director Lawrie Brewster is delighted at the success of the campaign, ‘The significance of our campaign cannot be understated. It reflects the enormous hunger out there for new, original ideas in the genre and proves that grassroots funding can now enable us to tell the stories that the mainstream would never touch.

We will use these funds not only to produce films but to distribute them in a manner that will see us build a sustainable model, focussed on producing high concept films and delivering them in unique physical media. Production companies can now sustain themselves with a direct and personal relationship with the people that count most, their audiences.’

The film certainly promises to be something different to the norm, with its brooding Scottish landscapes, unsettling, pagan vibe and brutal violence. A claustrophobic and intense tale of one man’s battle for survival in the remote highlands of Scotland, the film has echoes of The Wicker Man and Kill List with the central plot about a troubled veteran calling to mind films like Jacob’s Ladder and Apocalypse Now.

“Our film aims to be the most emotionally intense and disturbing pyschological horror of the year, with its unflinching portrayal of the true cost of war and the internal scars carried by our veterans. This film pays tribute to the courage that those who suffer from PTSD face in managing their condition. We do this in a narrative that pits such a soldier against an evil so terrifying and uncanny that no one will expect our hero to stand a chance. The Ravens are coming…”

Well, I guess we all have something to look forward to in July! Peep the trailer below!