This recap does contain spoilers, so read at your own risk
by Dylan Patton April 1, 2015

Overview:
Morgan wakes up in the back of his car.  The sun has risen and it looks to be a beautiful day.  He’s enjoying a meal by a campfire when an armed stranger appears.  The stranger introduces his group as ‘The Wolves.’  The man informs Morgan he’s going to take everything and Morgan back to the group.  Morgan refuses to be taken.  Another man appears and Morgan fights them both.  He knocks them out and leaves them in the car.

Rick wakes up, his wounds bandaged.  Michonne is standing guard and she’s not happy.  She once again makes the case that they all need to stay in Alexandria.  They can’t be out in the wild anymore.  Glenn, Carol and Abraham also pay a visit.  Deanna is holding a meeting.  It’s very possible Rick might be kicked out of the community.  Rick lays out a plan that if it looks like he’s going to get kicked out, hostages will be taken and they’ll take Alexandria by force.

Maggie makes a plea to Deanna.  She pleads that Rick was frustrated and lashed out.  He did pull a gun but didn’t pull the trigger.  She also tells Deanna that she let Rick and all of them in.  She still needs them all.  Deanna tells Maggie that she’ll hear Rick out and make her decision later.

Maggie and Glenn have their own meeting.  Maggie plans to talk to as many people as she can to persuade them before the meeting.  Glenn shortly notices Nicholas climbing the wall.  Father Gabriel is also taking a walk.  Both of these events can’t end well.

Daryl and Aaron are out searching for survivors.  They spot a man in a red poncho.  They’re able to track him for a while but lose sight of him.  They instead find a canned good warehouse.  Aaron leads Daryl to several trucks.  After opening one of the trucks, a trap is set off.  Walkers pour out of the trucks.  All of them have W’s on their foreheads.  Daryl and Aaron run to an abandoned car to escape.  Inside the car, Aaron finds a note warning people to stay away, that’s the warehouse is a trap.

Carol visits Pete to have him go check on Tara.  She warns him that she could kill him.  She won’t hesitate to do it.  She even hints that she knows where and how to dispose of the body.  Carol may seem nice and sweet but she has no problem killing Pete.  Carol was abused herself and she isn’t about to let Pete continue to abuse Jessie.   She does let him know that if Pete changes his ways, he could still live in this new world. 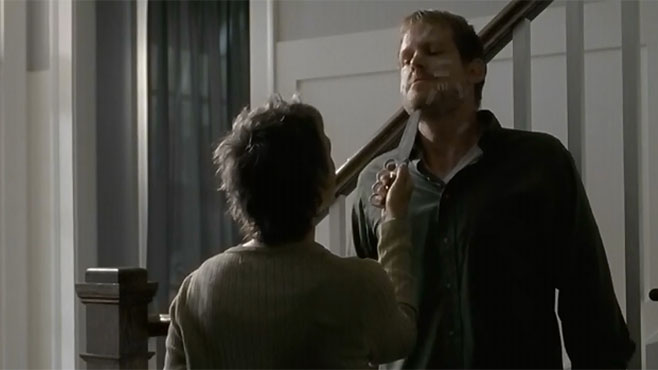 Meanwhile, Glenn continues to track Nicholas.  He stumbles across a slain walker and is shot by Pete.  Nicholas tries to finish off Glenn but Glenn vanishes.  Nicholas slays a walker later and is then attacked by Glenn.  The two men fight it out.  Glenn is able to fend off Nicholas but is attacked by a horde of walkers.  Nicholas takes off, leaving Glenn to fight for his life.  He already sacrificed his own life to save Noah, he clearly doesn’t care who else dies.

Daryl and Aaron are in danger.  The car is surrounded by walkers.  Daryl wants to lure them so Aaron can escape.  Aaron won’t hear of it and insists they stand and fight together.  Daryl agrees and they exit the car.  Suddenly, Morgan appears and helps them escape.  The trio manage to fight their way out of the trap and make it out safely.  Aaron offers to take Morgan back.  Morgan thanks them but insists he’s on his way somewhere.  He’s lost and is using the map Abraham left for Rick. 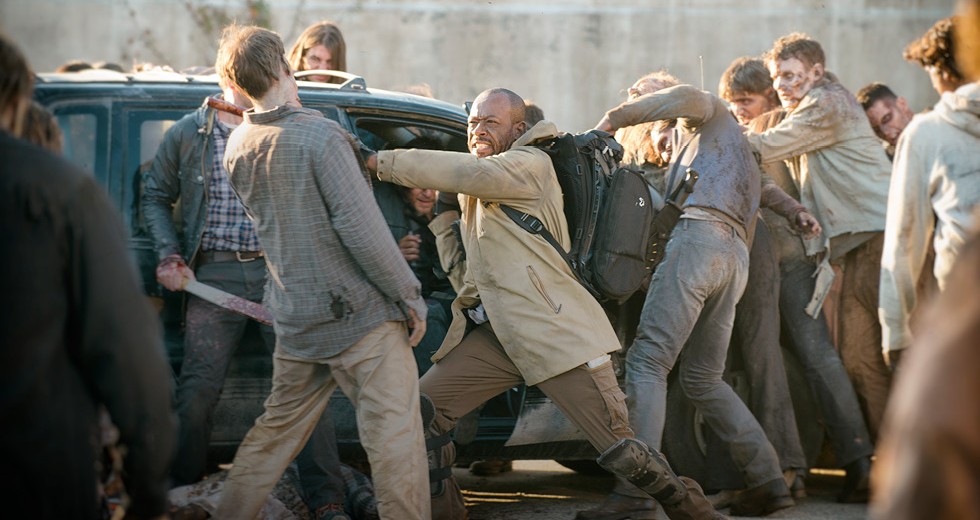 Father Gabriel returns.  He’s in a daze and not much for small talk.  He had to not only kill a walker, but finish off the man that the walker was snacking on.  He leaves the gate open upon his return.  Sasha comes to him for help but he rebuffs her.  Later, Rick sees the gate open and notices some blood and flesh on the metal.  He races around town looking for the possibability a walker is now inside.  He doesn’t just find one, he finds a small group.

The meeting is underway.  Rick’s friends stand up for him.  They assure the residents of Alexandria that Rick is a good man.  Deanna mentions the meeting she had with Gabriel.  Jessie points out she has no proof.  Gabriel isn’t at the meeting, so he can’t back Deanna’s story.  Deanna counters that Rick didn’t show up either.  Rick does show up carrying the body of a slain walker.  He criticizes the citizens for leaving the gate open.  He gives a speech saying that he can help them become stronger.  He was planning to take over at first.  He changes his mind.  They can become stronger if they work together.  Pete interrupts the meeting, armed with Michonne’s sword.  He declares Rick isn’t one of them.  Reg tries to intervene but Pete slashes his throat. Reg dies in Deanna’s arms. Deanna then orders Rick to kill Pete which he happily obliges.  Seconds later, Morgan, Daryl and Aaron appear.  Morgan doesn’t seem happy that Rick has killed somone. 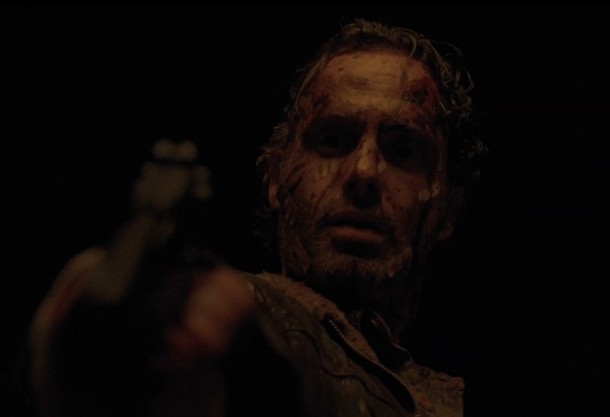 Impression:
An episode that seemed to have some punch to it.  It was interesting that we finally got some information on who was marking the walkers.  We know they’re called ‘The Wolves.’  We only see two members but I’m sure there’s more.  They did setup an elaborate trap to lure people in.  We did finally see what happened to the guy in the red poncho.  During a post credit scene, we see Red Poncho, now a walker wandering around the warehouse.  Someone has sprayed ‘Wolves Not Far’ on a car.  Also, we see Michonne about to place her kitana on the mantle.  She hesitates then sheathes it and slings it across her back.  A very cool sequence to leave us wanting more.

I can’t help but wonder what would’ve happened if the walkers hadn’t gotten inside.  Would Rick really take hostages and force the people of Alexandria to see things his way?  Michonne stopped him once.  If Rick did execute his plan, would another member of the group stop him?  Maybe the walkers attacking Alexandria was a blessing in disguise.  It seems Rick might just be the new leader of Alexandria after all.  What did you people think of the season finale?  Comment below your thoughts and what you’re hoping for next season.