Overview:
Dwight enjoys being a Savior.  He has no problem taking whatever he wants.  Because he’s Negan’s right hand man, no one can stop him.  He then decides to bring some dog food to a prisoner, Daryl.   Every day, Daryl is kept naked in a dirty, dark room, as loud music blasts outside the door.  Negan wants Daryl broken so he can bend to his will.  Negan has faith Dwight can break Daryl down.

One day Dwight tosses Daryl some clothes and takes him to see a man, Dr. Carson.  Sherry, his ex-girlfriend, is also in the room.  Sherry recognizes Daryl and wants to help him.  She pleads with him to do whatever the Saviors tell him to do. Dwight orders her not speak to him.  Dr. Carson assures Daryl that Negan will take care of him.  As Dwight escorts Daryl back to his cell, Negan bumps into them.  He orders Daryl to sit back while he has a chat with Dwight.  Another Savior, Fat Joey, guards Daryl.  He notes a nice room with furniture and a bed.  Dwight finishes his chat with Negan and takes Daryl outside.  Daryl sees others prisoners forced to bring more walkers to the perimeter fence.  Dwight threatens that Daryl will be either a prisoner or dead. 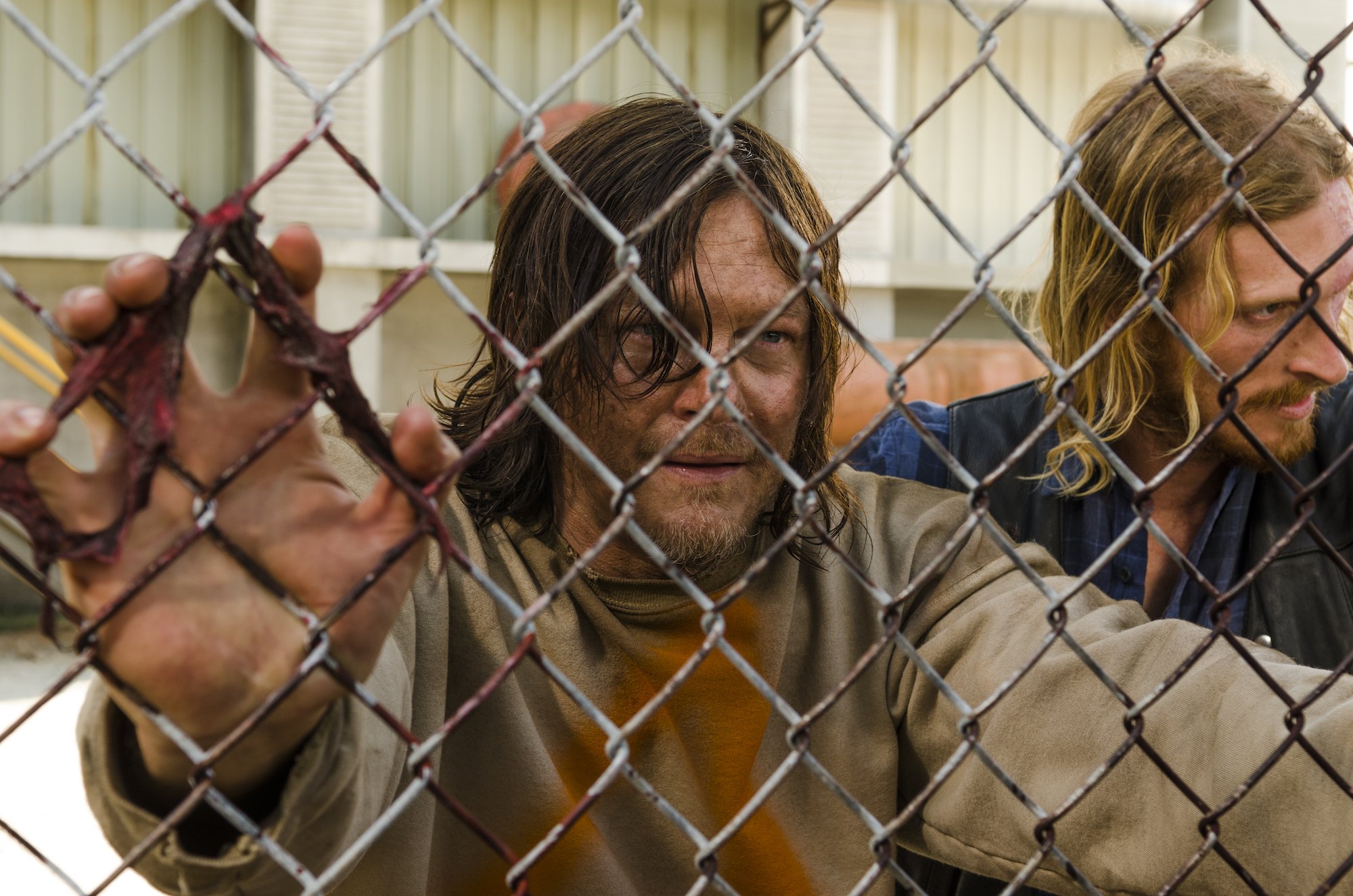 Daryl is taken back to his cell.  Dwight pleads with him to kneel, to submit to Negan’s rule.  Dwight once again locks the dooand leaves Daryl in the dark.  Dwight then reports to Negan about Daryl’s process.  Negan is pleased that Dwight is doing everything he can to break Daryl.  He’s so pleased he offers Dwight a chance to pick a woman from Negan’s harem.  Dwight turns the offer down.  A call comes from Dwight’s radio that someone escaped The Sanctuary.  Negan suggests sending Fat Joey, but Dwight insists on proving himself and rides off on Daryl’s motorcycle

Fat Joey checks up on Daryl.  As he leaves, Daryl notes that the door is left unlocked.  He sneaks out of the room.  Sherry finds Daryl and urges him to go back. He ignores her and makes his way outside.  He’s caught by a group of Saviors as Negan approaches Daryl, Lucille in hand.  Daryl refuses to submit to Negan.  Although Negan is impressed by his resolve, Negan has the Saviors beat Daryl as he walks away.  After he’s taken back to his cell, Sherry visits Daryl.  She’s sorry for stealing his stuff and leaving him in the woods.

Dwight carefully avoids a group of walkers.  As he passes a bridge, a walker falls from above.  Dwight steps back, falling to the ground.  The walkers, although missing limbs, make their way to Dwight.  Dwight is injured during the fight, but is able to escape  The bike is damaged, so Dwight has to walk it the rest of the way.

He finally finds his quarry, Gordon.  Gordon actually begs Dwight to kill him.  He’d rather die than go back to The Sanctuary.  Dwight can’t kill Gordon.  He has orders to bring him back to Negan alive.  Dwight threatens to harm Gordon’s friends if he doesn’t go back.  Gordon reluctantly agress to go back.  Gordon knows that Dwight agrees with him: There’s nothing left in the world.  Dwight responds by shooting him in the back.

He returns back home to taunt Daryl.  He even leaves a picture of Glenn’s body.  He then takes Daryl to see Negan.  Negan is waiting in the nice room Daryl saw earlier.  Negan is giving him one last chance to work for him.  He tells Daryl a story about Dwight.  Dwight, Tina and Sherry were tired of living under Negan’s rule.  They ran off and hid from the Saviors.  Strangely, Dwight returned to Negan and asked to be forgiven.  Sherry offered to marry Negan to spare Dwight’s life.  Negan burned his face anyways as punishment.

Daryl once again refuses to bend to Negan’s rule. Daryl blames himself for Glenn’s death and this is his punishment. Dwight takes Daryl back to the cell.  He then goes outside to take a breather.  He sees Gordon, now a walker, on the fence.  Dwight doesn’t like being under Negan’s rule.  He also thinks he has no other choice. 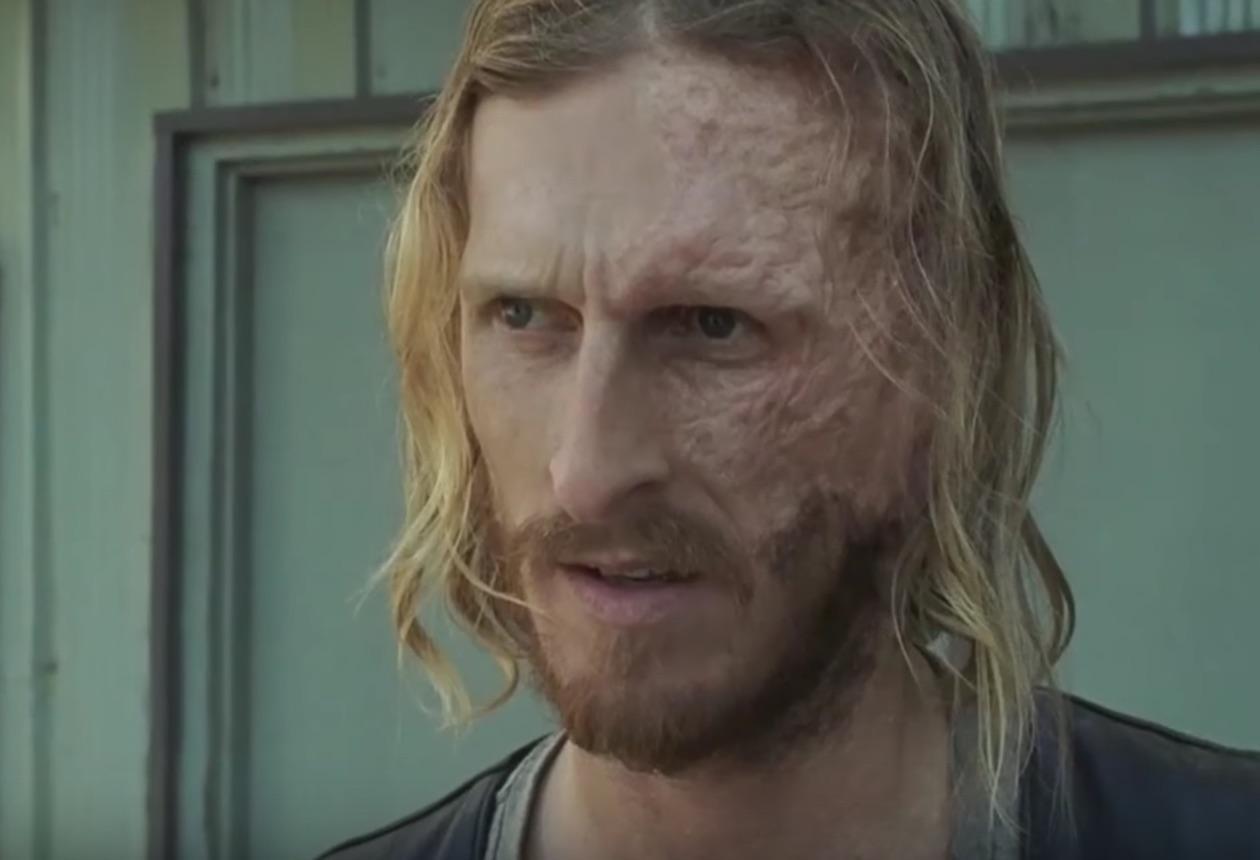 Quotes:
Sherry: (to Daryl) Whatever he’s done to you, there’s more.  There’s always more.  You won’t get away.  And when you’re back, it’ll be worse.

Dwight: (to Gordon) Look, there’s nowhere to go.  Everything’s his or will be.

Impression:
It was intriguing, in a dark way, to see how the Saviors lived in The Sanctuary.  It’s clear no one likes to live that way. Yet everyone is scared to rise up against Negan.  Dwight had a good point when he told Gordon about the outside world.  It was either live under Negan’s rule or die.  It seems no one knows of the other groups.  If they did, I doubt they would agree to live with Negan.  Rick and Ezekiel know how to treat their people.  I agree Negan has a certain charisma about him.  But I sure wouldn’t want to live or work for him.

I have a theory that Dwight actually helped Daryl escape.  The reason he insisted on leaving was that he hoped Fat Joey would screw up.  Fat Joey left the door unlocked, which allowed Daryl to escape.  When Dwight came back to see Daryl still a prisoner, it’s like he had a sad look on his face.  I think that by helping Daryl was a redeeming moment for Dwight.  He even agreed with Gordon about Negan’s rule.  The way I see it, Dwight doesn’t like Negan or his rules.  Yet he’s come to accept them as a way of life.  Then again, Dwight could be biding his time until he can kill Negan.