Overview:
Alexandria is once again safe and peaceful.  It’s hard to tell if there was a battle there.  Rick and Daryl are preparing to go on a supply run.  Carl is up and around.   Rick is optimistic about finding new people.  Daryl isn’t so sure and is starting to think that’s a good thing.  Denise requests Daryl bring back some orange soda for Tara.  On their way out, Eugene tells them of a crop, Sorghum, that could solve their food supply problem.

Rick and Daryl find an isolated barn.  Inside, they find a truck loaded with supplies.  Rick wants to take the truck back to Alexandria and come for the car later.  They soon spot a gas station.  Daryl remembers Denise requesting for orange soda so he wants to open a vending machine.  As Rick and Daryl try to bust it open, a man in a coat and a bandanna appear.  Rick and Daryl draw their guns on the stranger.  The stranger warns them of a large group of zombies coming their way.  Rick seems to warm to the guy, but Daryl seems cautions.  The stranger then introduces himself as Paul Rovia or ‘Jesus.’  Jesus takes off as Rick and Daryl take a moment to evaluate him.  Rick wants to bring him back, Daryl thinks it’s a bad idea.  Their conversation is interrupted by gunshots.  As Rick and Daryl go to investigate, they soon discover it was actually fireworks.  Jesus takes off in their truck. 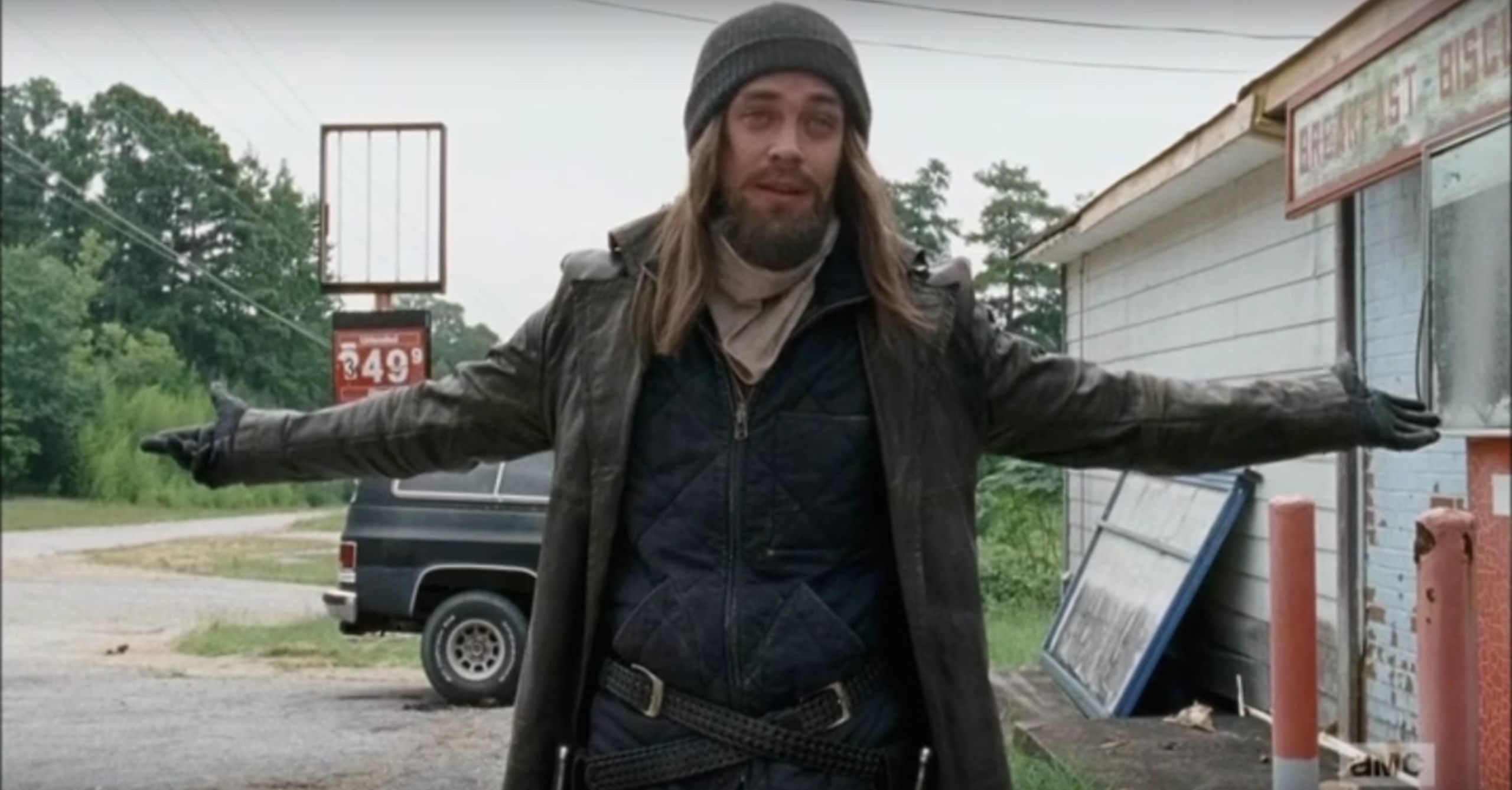 Enid and Carl are going for a walk in the woods.  Enid seems happy to be there while Carl seems distant.  They take a break for snacks and to read comic books.  Carl hears some rustling and draws his gun as Enid goes to hide.  It’s just Michonne and Spencer.  Enid decides she doesn’t want to go into the woods anymore.  As they make their way back, Carl spots a lone walker.  End and Carl instantly recognize who it is.  Carl refuses to kill it and won’t let Enid kill it either.

Carl orders Enid to go back home.  He lures the walker toward Spencer and Michonne.  Spencer sees the walker.  It’s Deanna, his mother.  Michonne offers to kill her, but Spencer does it instead.  He tells Michonne this was the reason he goes into the forest.  He was following his mother so he could kill her and bury her.  Later, Carl reveals to Michonne that only a loved one should’ve killed Deanna.  He tells Michonne he would’ve done the same for her.

Rick and Daryl continue their search for Jesus.  They soon find him fixing a flat tire.  They split up and surround Jesus.  Rick tries to subdue him but Jesus proves to be quite the fighter.  Daryl comes to help and Rick tackles Jesus.  They both hold him at gunpoint and tie him up.  They take off to find more supplies.  As they arrive at a farm, Rick hears a sound on the roof.  It appears Jesus has hitched a ride.  He jumps off and the chase is on. 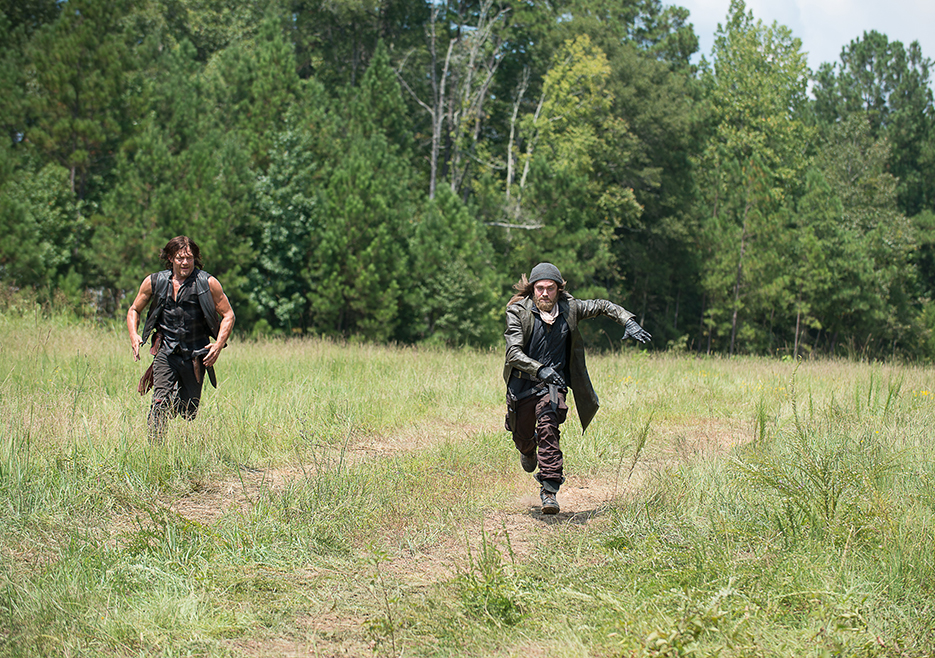 Daryl goes after Jesus while Rick is close behind.  Rick spots some walkers tied to a tractor.  He gets out and deals with the walkers while Daryl fights Jesus.  One of the walkers closes in on Daryl.  Jesus pulls out Daryl’s gun and kills the walker, saving Daryl’s life.  Daryl knocks out Jeuss and they tie him up.  Rick decides to take him back to Alexandria.  Jesus is taken to Denise for medical treatment.  Rick and Daryl leave Jesus tied up and decide to deal with him in the morning.

Rick heads home and chats with Michonne.  They’re both stressed and take some time to relax and joke around.  Some light touching leads to kissing.  Rick and Michonne end up making love.  Afterwards, they’re laying in bed together, relaxing in each other’s arms.  Jesus appears and calls out to Rick.  It’s important that they talk.

Quotes:
Rick: What’s your name?
Jesus: Paul Rovia.  But my friends used to call me Jesus.  Your pick.
Rick: You said you didn’t have a camp.  You on your own?
Jesus: Yeah.  But, still, best not to try anything
Daryl: Best not to make threats you can’t keep, either
Jesus: Exactly.

Jesus: I think you know I’m not a bad guy.
Rick: Yeah? What do you know about us?

Rick: It is pretty stupid of us to go out there, isn’t it?
Daryl: Yep.  Do it again tomorrow?
Rick: Yep.

Impression:
It seems things slowed down a bit for this episode.  Not a lot of action, although we did get to meet a new character, Jesus.  Jesus is a capable fighter and knows how to be sneaky.  I think he might be a new ally.  He never once tried to kill Rick or Daryl.  I’m guessing he’s about to give Rick and his people some information about the new threat, Negan.

Rick and his people are starting to warm up to Enid.  Maggie thanked her saving both her and Glenn.  Enid is a guarded person and yet seems to care for both Glenn and Carl.  She was determined to help Glenn save Maggie.  If she truly didn’t care, she would’ve left Glenn by himself.  Also there seems to be a romance between Rick and Michonne.  I wonder if there’s a romantic connection there.  Readers, what do you think? Did Rick and Michonne have an one night stand or is something more between them? 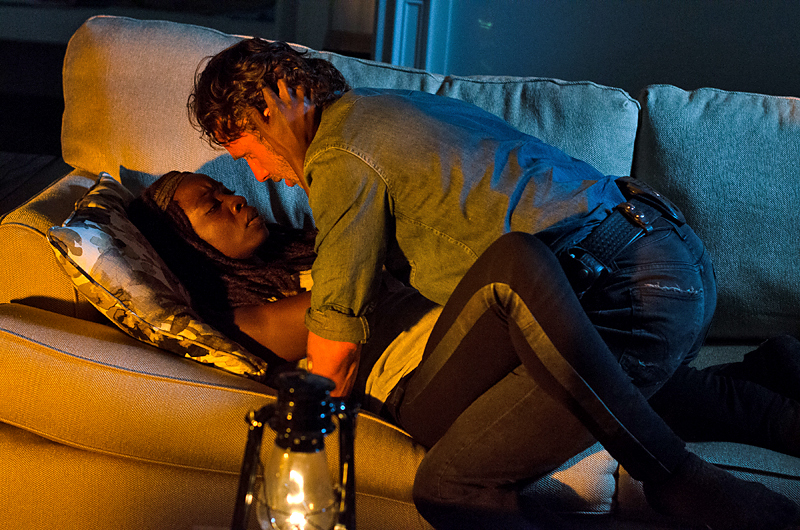