Overview:
Abraham and Sasha have returned from a patrol.  They’re laughing and making jokes.  The happiness takes a sour note when Sasha tells him she won’t be patrolling with him anymore.  She’ll be taking guard tower duty instead.  Abraham is shocked by this news.  It’s clear he enjoys spending time with Sasha.  He’s not sure how to handle this news.  Later, he wakes up next to Rosita.  He’s enjoying laying next to her but he can’t stop thinking about Sasha.

Maggie is in the field trying to improve the crop output.  The town is trying to ration the food.  Glenn comes to help and assures her it’ll be okay.  Maggie sees Abraham rushing to help Denise.  Glenn sees how worried she is and they both take off to help.  Inside Rick’s house, Carl draws his gun on an intruder.  It’s Jesus.  Rick and Michonne appear and lead Jesus downstairs.  Jesus explains that he’s looking for other settlements to trade with.

Rick, Daryl, Abraham, Sasha, Glenn, Maggie, Jesus and Michonne are going to Jesus’s settlement.  Carl is going to stay behind and help out at Alexandria.  On the way, Rick spots a bad car accident.  Jesus realizes the vehicle came from his settlement.  Daryl points out some tracks that lead to an office building.  Rick orders Jesus to stay outside while Maggie guards him.

Once inside, the group splits up.  After killing a few walkers, they find Jesus’s friends.  One of the people, Harlan, is a doctor.  He’s more than willing to hand over some prenatal vitamins for Maggie.  It’s not long before they reach Hilltop.  Jesus leads Rick and his people to the front gates.  A couple of guards armed with spears threaten the group.  Jesus and Harlan vouch for Rick and his people.  Rick won’t go inside and wants Gregory to come outside.  Jesus tells Rick that his people ran out of ammo months ago.  They pose no threat at all.

Jesus shows them around Hilltop.  The people seem friendly enough.  They pass the time planting crops, washing laundry and cooking.  They don’t have many weapons except for a few spears they make themselves.  Jeuss gives them a tour and explain how Hilltop came to exist.  The walls were built using scrap metal from a nearby supply yard.  FEMA trailers are used to house most of the residents.  He explains that the main building, Barrington House, used to be a museum. 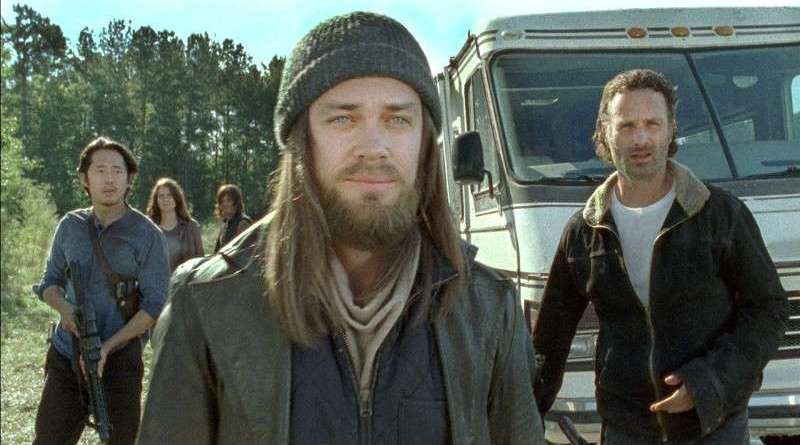 Jesus takes them inside where they meet Hilltop’s leader, Gregory (Xander Berkeley).  Gregory suggest everyone gets cleaned up so they can talk.  Maggie meets Gregory in his office.  He’s arrogant, rude and only wants to trade on his terms.  When Maggie argues with him, Gregory kicks her out of his office.  Jesus assures Rick and the rest that he can reason with Gregory.  This discussion is interrupted by the arrival of more Hilltop residents.  A man, Ethan, approaches Gregory.  He informs Gregory that two more, Tim and Martha, are dead.  Another resident, Andy, asks Gregory if the drop was light.  Another man, Craig, is being held hostage.  Ethan reveals that Craig will be returned safely when he delivers a message.  Gregory asks for the message, only to be stabbed in the stomach. 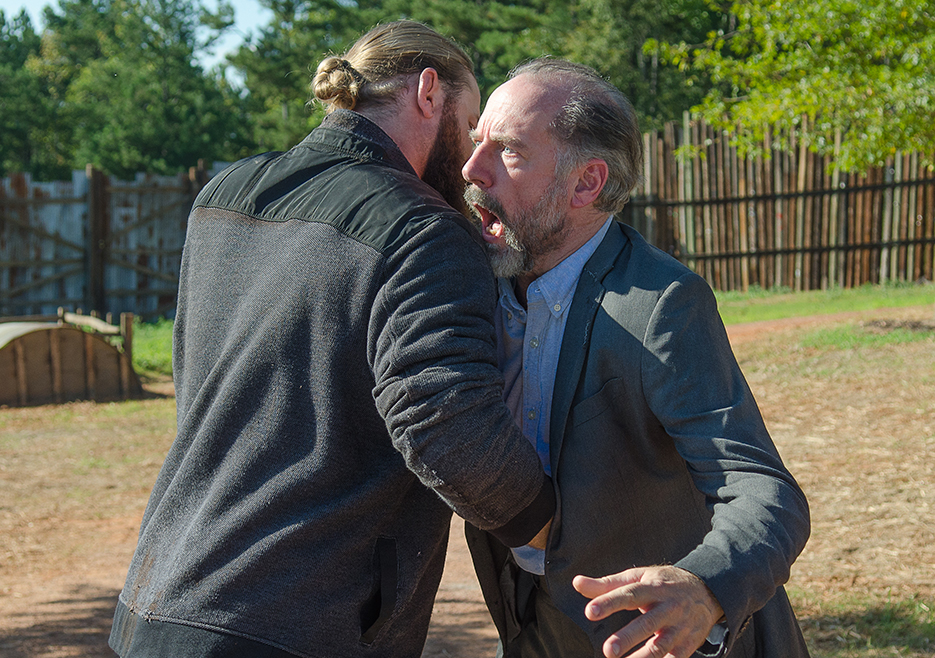 Rick attacks Ethan.  As they fight, Andy attacks Abraham.  Daryl comes to Abraham’s rescue.  Rick has no choice but to kill Ethan.  The other residents are about to attack when Jesus orders them to stop.  He points out that Ethan started the fight.   Gregory is taken to the infimary to be patched up while Jesus explains the situation.  A man, Negan, leads a group called ‘The Saviors.’  The Saviors are extorting the people of Hilltop.  If the Hilltop residents give the Saviors half of everything, they live.  Rick offers a deal: They’ll take care of the Saviors in exchange for supplies.  Jesus offers to take the deal to Gregory.  Later, Gregory wants to talk to Maggie.  Maggie makes the offer and wants half of the supplies up front.  She reminds Gregory that Negan will ask for more.  Gregory and his people aren’t fighters and don’t have any ammo.  Rick and his people can take out the Saviors.  Gregory reluctantly agrees to the deal.  Maggie wants one more thing.

Rick and his people load up the supplies Gregory promised.  Jesus offers to go with them to the compound.  Rick wants take Andy as well.  Andy’s been to the Savior’s compound so he knows the layout.  Everyone piles into the RV and heads out.  Glenn passes around an ultrasound picture.  Everyone smiles as they see the picture.

Quotes:
Jesus: Look, we got off to a bad start.  But we’re on the same side, the living side.

Abraham: You ever think about it, settling down?
Daryl: You think shit’s settled?

Impression:
This season is going on a steady pace.  It’s not quite slow.  This episode has some tense moments, including the scene where Rick and his people save Jesus’s friends.  We’re starting to get a feel of Jesus.  He’s a capable fighter and a good person.  He’s willing to help his friends, even it means putting himself at risk.  Rick doesn’t trust him just yet.  He’s starting to come around though.

We’re starting to get a sense of the danger the people of Hilltop are facing.  Although Daryl and Abraham assure Jesus that Negan and his people are pushovers, fans of the comics know otherwise.  I have a feeling when Negan himself shows up, death and sadness will be the result.