Overview:
Carol doesn’t want Maggie at the compound.  She’s worried about her and the baby.  A Savior, Donnie, appears and draws a gun just as Carol shoots him.  Maggie is about to finish him off, when three women, Paula, Michelle and Molly, appear and hold them both at gunpoint.  Paula gets on the radio and contacts Rick.  Rick and Paula both make demands.  Paula decides she’ll let Rick know when she’s ready to trade. 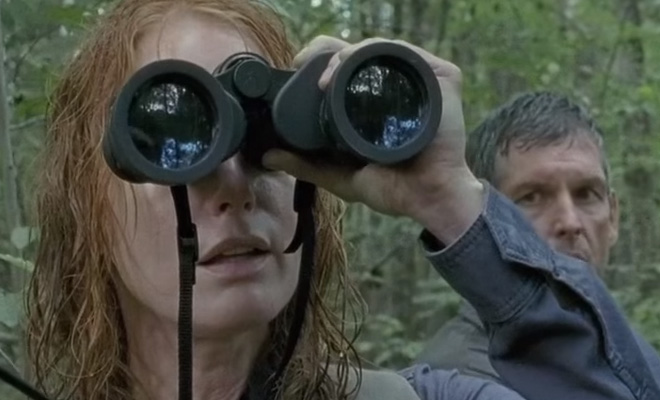 Maggie and Carol are taken to a car and blindfolded.  A short drive later, they arrive at an empty slaughterhouse  Paula kills a walker before placing Carol and Maggie in a room. The others explore and secure the building. Paula taunts Carol and Maggie.  She’s angry her friends are dead.  Before she can taunt them more, one of the Saviors call for help.  She drags the walker’s body out, leaving behind a rosary that Carol slips into her pocket.

Carol begins to hyperventilate as Paula and her people come back.  Maggie pleads with them to take out the gag.  Carol begs them not to hurt Maggie because she’s pregnant.  Paula and Molly continue to threaten Maggie and Carol, while Michelle warms to Maggie.  Donnie is angry that Carol shot him.  He wants to hurt her as payback.  Paula refuses because they need both Carol and Maggie as bargaining chips with Rick.  Donnie becomes angry and attacks Paula.  Carol and Maggie both attack Donnie. Pauala gains the upper hand and knocks Donnie out.   Paula then orders Michelle to take Maggie away and see if she knows anything useful.  Carol sees a couple of walkers outside a door.  A plan begins to form in her head.

Michelle notes that Maggie is dressed nicely which means she’s staying someplace nice.  Michelle warns Maggie that she and her people aren’t the good guys.  Maggie notices that Michelle is missing a finger.  Maggie asks about it and Michelle tells her it was punishment for stealing gas.  She wanted to look for her boyfriend.  She found his body.  Maggie and Michlle both agree on one thing:  Neither of them are ready to die.

Carol tries to get Molly and Paula talking.  Paula wants to know why Carol and her people attacked the Saviors.  Carol tells a white lie by telling them it was self defense.  She tells them some of her people were attacked on the road.  Paula makes a comment about that group being blown to bits.  Carol is confused as to how Paula found that out.  Paula recalls how she was a secretary before the world changed.  She was working in DC when the Army came and took over.  Anyone important was evacuated.  She wasn’t allowed to see her husband or children.  Her boss was the first person she killed to survive.

Carol informs her she’ll die once Rick comes to save her and Maggie.  Paula makes contact and agrees to the deal.  She then contacts her own people and tells them to hurry.  Paula and Molly leave the room to clear out any walkers.  Carol takes out the rosary and sharpens it to cut her bonds.  She then gets Maggie and prepares to leave.  Maggie tells Carol that they have to kill the Saviors.  Carol relunctanyly agrees.  Maggie is about to kill Donnie when she realizes he’s already dead and starting to turn.  She has an idea and sets up a trap using Donnie.  Molly returns to the room, only to be bitten by Donnie.  She kills Donnie just as Maggie takes her out.  Carol and Maggie leave the room just as Paula enters and find the bodies.

Carol and Maggie are trying find their way out.  The hallway leading outside is filled with walkers, some of them impaled.  Paula and her people set this trap so Carol and Maggie couldn’t leave, let alone be rescued.  Paula appears and taunts them.  Carol pulls a gun and begs Paula to run.  Michelle comes around the corner and attacks Maggie.  During the fight, Michelle pulls a knife and slashes Maggie’s stomach.  Carol shoots Michelle in the head.  She goes back to Paula and begs her one more time to leave.  Paula attacks as Carol throws her to an impaled walker.  The walkers attacks Paula as Maggie and Carol flee.  They then set a trap for Paula’s backup.  They go to a room, the ‘kill floor’ and douse the floor with gasoline.  Carol, imitating Paula, tells them to meet them on the kill floor.  As the men arrive, Carol lights the gasoline on fire, killing the men. 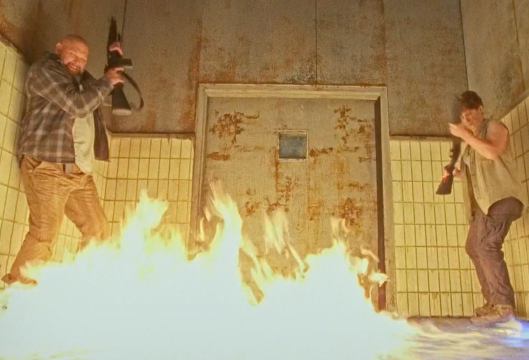 Shortly after, Rick and the others come to the rescue.  Rick is holding his hostage, Primo, at gun point.  He’s relieved to see Carol and Maggie are okay.  Maggie is comforted by Glenn while Daryl comforts Carol.  Both Carol and Maggie agree that they’re done with killing. Although Carol and Maggie had to kill to survive, it affected them both. Rick asks Primo about Negan’s location.  Primo responds by saying he’s Negan.  Rick shoots him as Carol watches, horrified.

Quotes:
Paula: You’re wondering if there’s a way out of this.  There isn’t.  Not unless I say so.

Paula: What do you think you know about Negan?
Carol: He sounded like a maniac.  We were scared, we had to stop him.
Molly: Sweetie, sweetie.  We are all Negan.

Paula: If you could do all this, what were you so afraid of, Carol?
Carol: (aiming a gun at Paula) I was afraid of this.

Impression:
This episode took the time to show up an inside look at Rick’s people and the Saviors.  Rick’s people kill when they have to.  They don’t terrorize people or look for people to bully.  Carol and Maggie realize they can’t kill anymore.  Carol even begged Paula to leave.  Morgan got through to Carol.  I think she knows that sometimes you don’t have to kill.

Paula was in some ways like Carol.  She had a family and a husband she once loved.  The end of the world changed them both.  Both women became hardened.  Both women kill to protect themselves.  Paula became too ruthless.  She no longer cared about anyone.  Molly made a comment about how they’re all ‘Negan.’  I think the Saviors developed this mentallity to protect the identity of the real Negan.  As dangerous as he is, I can’t wait to meet him.