Overview:
The citizens of Alexandria are going through their routine.  Gabriel is walking grounds on patrol.  Olivia is making sure the pantry is stocked.  Carol is sitting on her porch as she holds her rosary.  Morgan is practicing his Aikido while he builds a cell.  Rosita gets dressed while Spencer sleeps in her bed.  Meanwhile, Carol stops by to talk with Daryl.  He regrets sparing the three people he met in the forest.  They make some more small talk before she leaves.  When Daryl asks if her captors did anything to her or Maggie, Carol replies no.  Later, Denise approaches Rosita and Daryl.  She remember seeing a little gift shop when she left DC.  She hints there might be medical supplies there.  Daryl is reluctant to take her.  Denise is adamant that either they take her, or she goes alone.  Daryl and Rosita give in and off they go.

Abraham and Eugene are also on a supply run.  Abraham notes that Eugene has been taken up weapons training, guard duty, even flirting with some women.  Eugene is even sporting a new hairdo.  He explains that he’s a survivor and has to adapt to keep on surviving.  Abraham scoffs at him and keeps walking.  They soon find a machine shop.  Eugene picks the lock and they enter.  Eugene has an idea to use the shop to make bullets.  Abraham praises the idea and the matter comes to a halt when a walker appears.  Eugene volunteers to do kill it.  Considering the walker has molten steel covering his head, the task is harder than he thought.  Much to Eugene’s dismay, Abraham kills the walker.  He then tells Abraham that he longer needs him. Abraham storms off and tells Eugene to find his own way home.

Daryl, Rosita and Denise break into the shop.  Daryl pries open the door for the pharmacy.  Rosita joins him in looting it, while Denise goes to investigate a noise.  She goes into a backroom and finds a crib and some boxes full of books and toys.  She soon finds the source of the noise: a decomposed, female walker.  In a sink, she finds a child’s shoe in a pool of blood and waste.  Denise runs out, horrified.

Daryl and Rosita come out to find Denise crying.  He compliments her on finding the store.  He notes that she’s holding a keychain with the name, ‘Dennis.’  Later as they walk back, Denise explains Dennis was her twin brother.  He was brave and angry.  Daryl notes Merle was the same way.  Daryl suggests they take the tracks back home.

Along the way, Denise sees a cooler inside a car.  She’s not afraid of the walker inside.  She opens the door to get the cooler as the walker tries to attack her.  Daryl and Rosita come to the rescue, but Denise refuses their help.  She manages to kill the walker herself and walk away, unharmed.  She opens the cooler to get her prize, a six pack of orange soda.  Daryl and Rosita yell at her for risking her life.  She tells them they do the same thing.  She wanted them to come with her.  Daryl is brave just like her brother. She wanted Rosita to come along so she wouldn’t be alone after breaking up with Abraham.  Before she can continue her speech, an arrow strikes her in the head.  She drops to the ground as armed men surround Daryl and Rosita.  Dwight, the man Daryl met in the woods, is holding Daryl’s crossbow.  Dwight is also holding Eugene hostage. 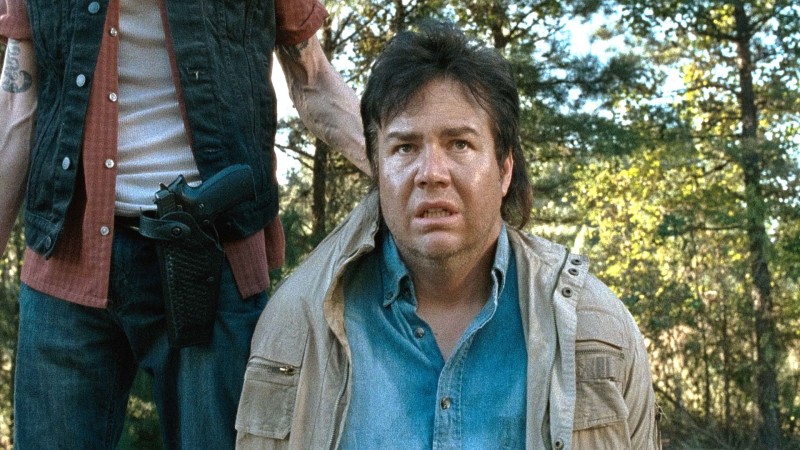 Dwight has some demands for Daryl and Rosita.  He wants to back to their settlement and take whoever and whatever they want.  If they don’t, Eugene will die.  As Daryl and Dwight threaten each other, Eugene spots Abraham hiding behind some oil drums.  Eugene points him out to Dwight.  Dwight orders one of his men to go check it out.  Eugene then bites Dwight in the crotch as Abraham opens fire.  Daryl and Rosita join in the fight.  Daryl is about to chase Dwight when Rosita calls him back.  Eugene is shot and they need to get him back home.  They have no choice but to leave and head home.

Eugene is going to be okay.  Abraham and Eugene patch things up.  Abraham goes to see Sasha and she invites him inside.  Carol leaves a note behind.  She’s leaving Alexandria for good.  She knows that the only way she can stay if she kills to defend her loves ones.  She can’t bring herself to kill anymore, so this is the only option.

Denise: I’ll go alone if I have to.
Daryl: You’ll die alone.
Denise: I’m asking you to make sure I don’t.

Daryl: So was he older or younger?
Denise: Older.  By six minutes.  My parents came up with the Dennis\Denise thing on one of their benders.  Hilarious, right?  Noting scared him.  He was brave.  He was angry, too.  It’s kind of a dangerous combination.
Daryl: Sounds like we had the same brother.

Impression:
I really liked Dense.  She was kind, sweet and was a good addition to Alexandria.  I loved how she gave Daryl and Rosita that pep talk.  I wish she would’ve died fighting instead of being shot from behind.  I wonder how the people will handle her death.  Dwight is a coward who needs to die.  Daryl will not let Denise go unavenged.  I can’t help but wonder what happened to Dwight’s face.  I also wonder if Dwight is a Savior, or has his own little group of psycopaths.

Carol has decided to leave.  She left the group last time, but found her way back. Tobin was right when he said Carol was important to the people of Alexandria.  Although, I see her point about killing people.  She doesn’t want to do it anymore.  She knows the Saviors are vicious.  She knows that she’ll have to keep killing if she’ll stay.  She’s choosing to run rather than lose her humanity.  I just hope Carol stays safe wherever she decides to go.