Overview:
Carol is packing her backpack full of essential supplies.  She’s about to leave when Tobin comes to her door.  She hides the backpack and tries to look happy to see him.  Tobin looks back on Denise and tells Carol he knew since the beginning of the outbreak.  Carol tries to listen, but her mind start to wander away.  Later that night as Tobin sleeps, Carol takes her backpack and slips out.

The next morning, everyone is enjoying their day.  Glenn and Maggie are enjoying a romantic moment together.  Daryl is sitting on his motorcyle as he looks at the keychain Densise found at the shop.  He has a look of strong determination.  Sasha greets Abraham and gives him a cigar.  Rosita sees the exchange and doesn’t look too happy.  Rick and Michonne are laying in bed together, sharing an apple.  Michonne relays to Rick that Maggie worried about the Saviors launching an attack.  Rick assures her that everything will be okay.  If the Saviors do attack, the people of Alexandria will fight back.

Michonne goes out to meet Glenn and Maggie.  Maggie suggest they hide caches of weapons in case of an attack.  She wants the people of Alexandria to be able to get to a weapon qucikly.  Daryl revs his motorcycle and heads to the gate.  Rosita hesitantly opens the gate as Daryl takes off.  Michonne and Glenn climb into a van to follow Daryl.  As Abraham prepares to join, Rosita tells him to stay put.  Glenn wants enough people to stay to defend Alexandria.  Rosita insists on going because she knows where to find Daryl.

Carol is driving a compact car, with spikes attached as defensive weapons.  Suddenly, a group of armed men spot her and open fire.  Carol is forced to stop.  The leader, Jiro, calls out to her and demands she exits the car.  Jiro wants to know where she came from.  Carol begins to cry and begs them to turn around and walk away.  As the men laugh, Carol opens fire with a concealed gun.  One of the men is still alive, and tries to attack her.  Carol kills him with a spike from her car.  She steals his gun and approaches the truck.  Jiro pulls out a knife and rushes Carol. 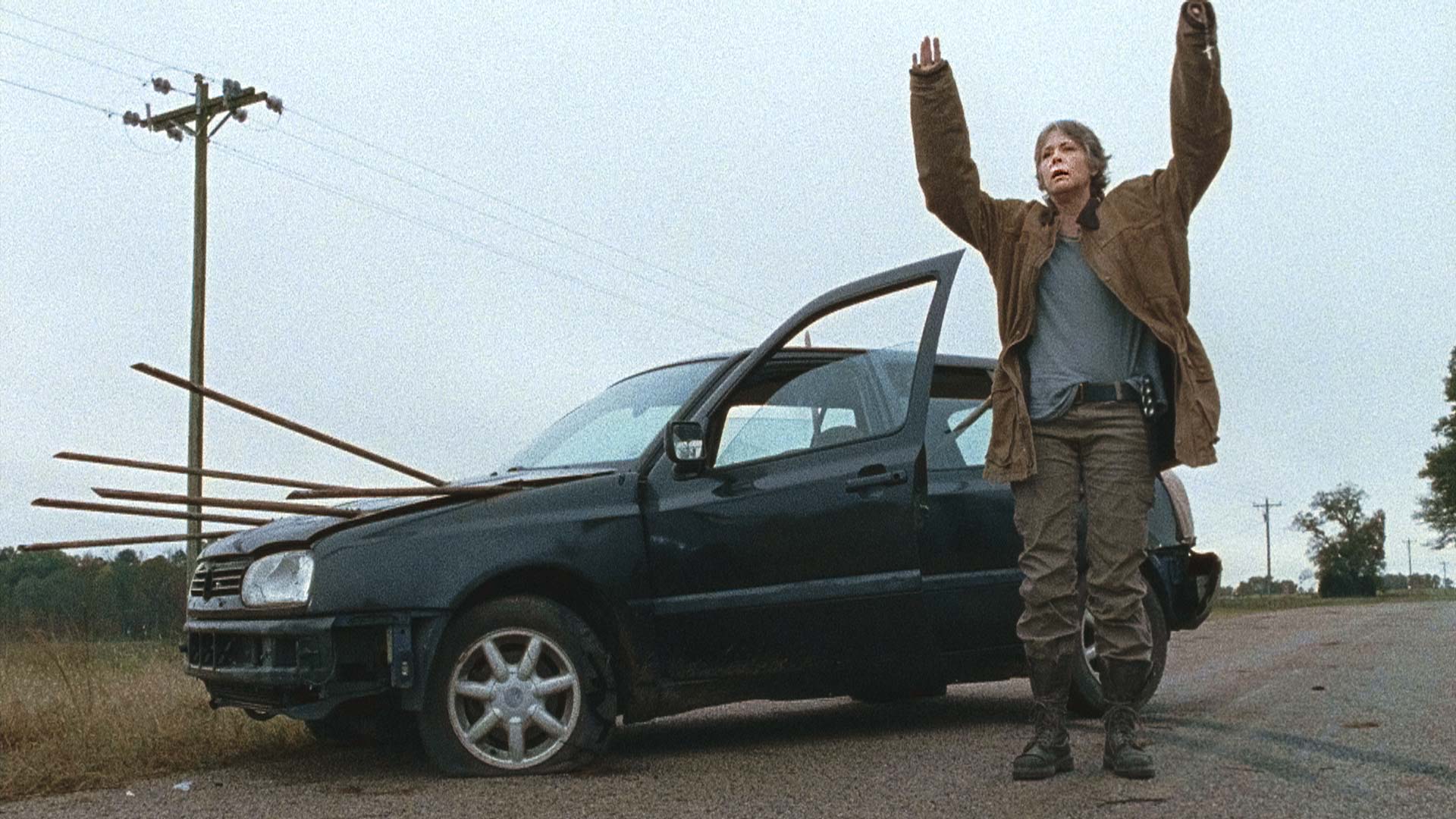 Rick is curious as to why Morgan is helping find Carol.  Morgan answers by saying it’s the right thing to do.  A short time later, they come across Carol’s car and the truck that attacked her.  Rick quetions Jiro to find out what happened to Carol.  Jiro’s too injured to answer, so Rick finishes him off.  Rick and Morgan continue to look for clues.  He finds a spear that came from Hilltop.  He concludes that these men were Saviors.    Morgan spots a blood trail leading to a farm nearby.  Rick is worried there’s more Saviors out there.  Morgan warns that Rick may have started a war.

As they get to the farm, they see a man wearing armor.  He kills one walker, then hides as Rick and Morgan approach.  Morgan asks him if he’s seen Carol.  The man flees are several more walkers appear.  Rick and Morgan take out the walkers.  Rick notes that the man used a spear like the people from Hilltop.  He theorizes that the man is a Savior.  Morgan thinks the man is just someone trying to survive, like them.  He then confesses to Rick that he had a Wolf as a prisoner.  Morgan can’t bring himself to kill anymore.  He believes everyone can change.  Rick is furious until Morgan explains that by sparing the Wolf, the Wolf was able to save Denise who saved Carl.  Morgan suggests Rick go back home and take care of the others.  He then promises Rick he’ll return when he finds Carol.

Maggie takes a moment to enjoy the haircut she Enid gave her.  The two share a tender moment.  Enid now sees Maggie as a friend, someone she can turn to, if she needs someone.  Their tender moment is runied when Maggie cries out in pain.  She doesn’t know what’s wrong, but she needs to get help fast.  Meanwhile Rosita, Glenn and Michonne continue their search.  They soon find Daryl and he’s furious.  He blames himself for not killing Dwight when they first met.  Daryl blames himself for what happened to Denise.  They beg him to come back but he refuses to listen to them.  Rosita follows Daryl to help him.  Glenn and Michonne decide to head back home.  Glenn knows that they need to know more about the Saviors.  He thinks the best course of action is to go home and regroup.  Suddenly, someone starts to whistle.  Armed men appear, led by Dwight.  Later, Daryl and Rosita continue their search.  Daryl soon sees Glenn and Michonne tied up.  As he approaches them, Dwight sneaks up him.  Before Daryl can turn around, Dwight opens fire.

Quotes:
Rick: I’m proud of her.
Morgan: How’s that?
Rick: She took four of them down.  That woman, she’s a force of nature.
Morgan: She left because she can’t anymore.  That’s what her letter said.
Rick: She could because she had to.  Sometimes you have to.

Morgan: It’s all a circle.  Everything gets a return.

Glenn: (to Daryl) We need to get back there and figure this out from home.  Our home.  We need you, and everyone back there needs us right now.  It-It’s going to wrong out here.

Impression:
We got to see more of the Saviors.  It seems strange they just happened to bump into Carol on the open road. I also wonder just how many Saviors are out there.  Rick and his people were able to beat the Wolves without any problem.  I’m guessing the Wolves were just a small group.  The Saviors could be more of a threat to our heroes.  Carol was able to take out the Saviors.  I just hope she’s okay.  Rick did have a point when he mentioned that someties you have to kill people.  Carol isn’t a psychopath, she had no choice but to defend herself.

I’m wondering what happened to Dwight since we last saw him with those two women.  In this episode, his face is burned badly.  Is he with the Saviors now, or did he form his own group?  Maggie seemed to be in a lot of pain.  Enid did give her something to drink earlier.  Is it possible Enid poisoned Maggie?  When the Wolves attacked, Enid was describing the attack and said ‘we.’  Maybe Enid is a Wolf and poisoned Maggie in retallionation for killing the other Wolves.