Overview:
Carl is at the armory gathering weapons as Enid tries to talk him into staying.  He wants her at Alexandria so she’ll be safe from the Saviors.  Rick is preparing the RV to take Maggie to Hilltop.  She’s getting worse and needs medical attention immediately.  Abraham, Sasha and Eugene volunteer to go with Rick.  Gabriel assures Rick that the defenses are ready.  He also assures Rick that the people are ready to evacuate and meet up at the rendevous point, if it comes to that.

Morgan continues his search for Carol.  He finds a horse which helps him cover more ground faster.   He soon finds Carol sitting on a porch.  Although she refuses his help, Morgan takes a look at her.  She has a stab wound on her side, so he patches her up the best he can.  Morgan promises Carol he’ll take her back to Alexandria so she can get proper medical care.  Carol refuses because she refuses to kill anymore.  She knows she can’t protect the people she loved without killing anyone.  Morgan refuses to leave Carol, even when she pulls a gun on him.  After Morgan goes on patrol, he notices that Carol is gone.  He gets up on his horse to find her again.

Carol is walking by herself.  She’s panting and struggling to walk.  She hears a noise coming from a trash dumpster.  She shuts the door, trapping the walker inside.  Another walker appears and attacks her.  Carol is so weak she’s barely able to fight it off.  She finally kills it just as Roman appears.  They both fight and Roman gets her gun.  He threatens to kill her slowly.  He shoots her in the arm and in the leg.  Just as he’s about to kill her, Morgan appears and aims a gun at Roman.  He begs him to walk away.  Roman tries to shoot Carol, forcing Morgan to kill him.  Morgan checks Carol’s wounds as two men in armor appear.  They’re armed, yet they’re willing to help Morgan and Carol. 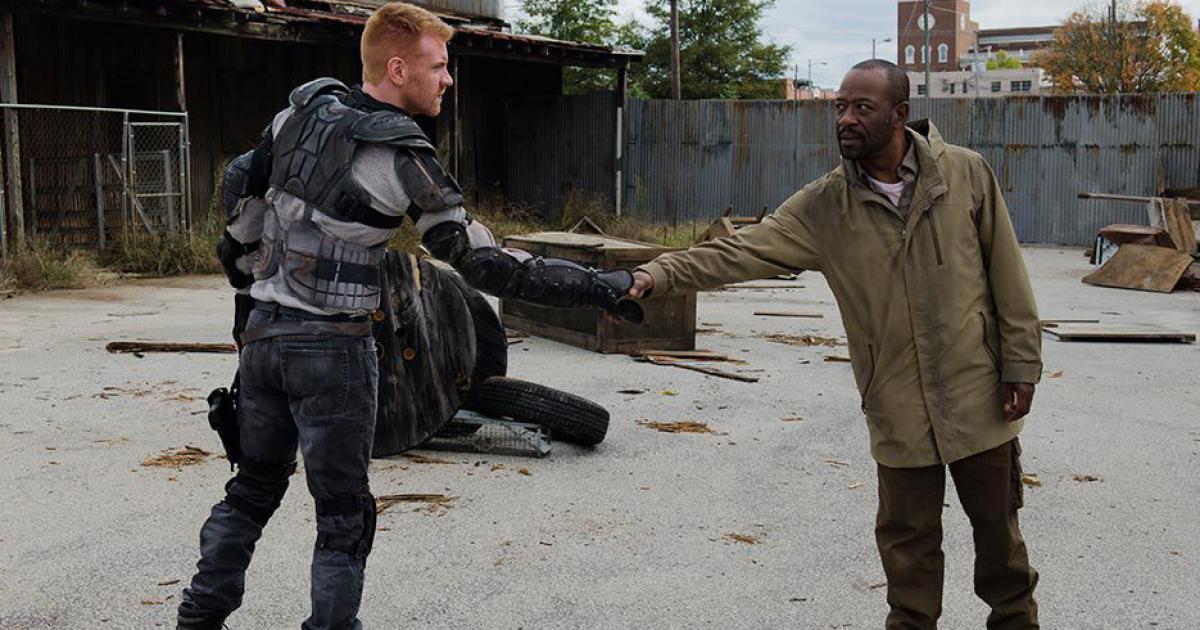 Rick goes to check on Maggie, who’s resting in the back.  He assures her that everything will okay once they get to Hilltop.  He tells her that everything they’ve survived, they’ve done it because they’ve stuck together.  Soon, Rick and his people encounter a problem.  A group of Saviors have set up a roadblock.  When Rick tries to make a deal, a Savior threatens them.  Rick decides to find another route instead of fighting.  Eugene finds one that’ll take more time.  However, it’ll give them more visiability against any attackers.  They come across two more roadblocks.  Abraham notes the Saviors have them outnumbered.  The second roadblock consists of several walkers chained together.  One of the walkers have strands of Michonne’s hair on it.  Another one was shot with Daryl’s crossbow.  A few Saviors open fire on Rick’s people.  Rick is able to break the chain, then they all get in the RV and drive off.

Rick isn’t sure what to do next.  Maggie’s condition is getting worse.  He promises Maggie that she and the baby both will be okay.  Rick is worried because the Saviors were shooting at them without trying to kill them.  He fears they’re heading straight into a trap.  Shortly after, Rick and his people go on foot.  They encounter a pile of wood blocking the road.  The Saviors hang a man off a bridge and light the wood on fire.  Rick and his people have no choice but to turn around again.  Inside the RV, they try to come up with a plan.  Eugene pitches the idea that the Saviors will be expecting the RV.  They could go the rest of the way on foot.  As they prepare to head out, Eugene hands Rick some notes on how to make bullets.  Abraham tells Eugene that he’s a survivor and hugs him goodbye.  As Eugene drives off, the rest head out on foot.  Rick and Abraham are carrying Maggie on a stretcher as the rest are keeping an eye out for any attackers.  Suddenly, men are whistling from all around them.  Rick orders everyone to run.  They make it into a clearing when lights appear all around.   They’re Saviors everywhere, armed and ready to kill them all.  They have Eugene as a hostage.  Rick and his people are relieved of their weapons and forced to kneel. 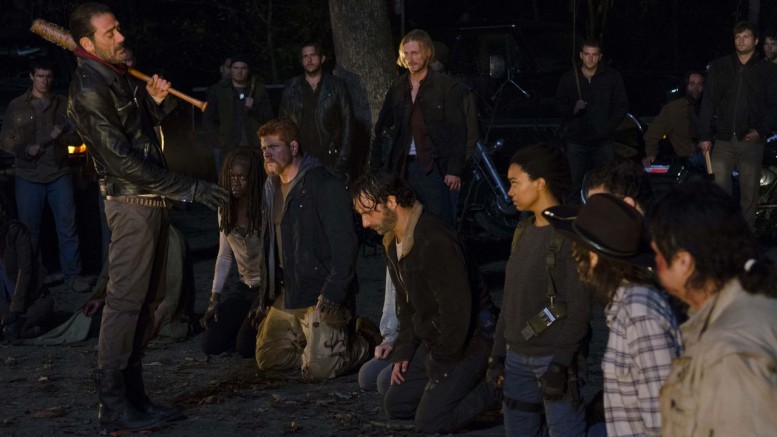 The situation is even worse when Rick learns that Daryl, Glenn, Rosita and Michonne are also prisoners.  One of the Saviors introduces them to their leader, Negan.  (Jeffrey Dean Morgan)  Negan isn’t happy that Rick killed some of his people.  He gives Rick the same threat he gave Gregory: Give him half of their belongings or they die.  Also, one of them must die for killing his men.  He then introduces Rick to his friend ‘Lucille,’ a baseball bat wrapped in barbed wire.  He decides to toy with them by playing a game of ‘Eenie, Meenie, Mo.’  Rick and his people have no choice but to watch in horror as Negan goes down the line.  He stops at one of them.  He pummels his victim to death as the others scream in terror.

Quotes:
Negan: Hi.  You’re Rick, right?  I’m Negan.  And I do not appreciate you killing my men.

Negan:  Today was career day.  We invested a lot so you would know who I am and what I can do.

Negan: Anybody moves, amybody says anthing, cut the boy’s other eye out and feed it to his father and then we’ll start.  You can breathe, you can blink, you can cry.  Hell, you’re all going to be doing that.

Impression:
This episode had me going through so many mixed emotions.  The episode had so much running around, yet very little action.  I get that the Saviors had setup a series of traps.  This caused Rick and his people to drive around to avoid the Saviors.  I was hoping for a fierce battle between them.  I was glad that we finally got to meet Negan.  Jeffrey Dean Morgan did an awesome job of menacing us and our heroes.

I’m not sold on how they executed the final scene.  Yes, one could argue they were going for dramatic effect.  But throughout the whole season, there was speculation as to who would die at Negan’s hands.  Why would the writers choose to leave us hanging like that? I think it was a cheap move on their part.  So now we have to wait until next season to find out who died.  The time has come to speculate, bet and nitpick that last scene to death for clues.  I think it was either Abraham or Rosita.  Abraham broke up with her, so she’s now considered ‘disposable.’  It could be Abraham seeing as how Negan is a bully and could target a potential threat.  Comment below your threats.  Hang in there, TWD fans, the answer will come soon enough. 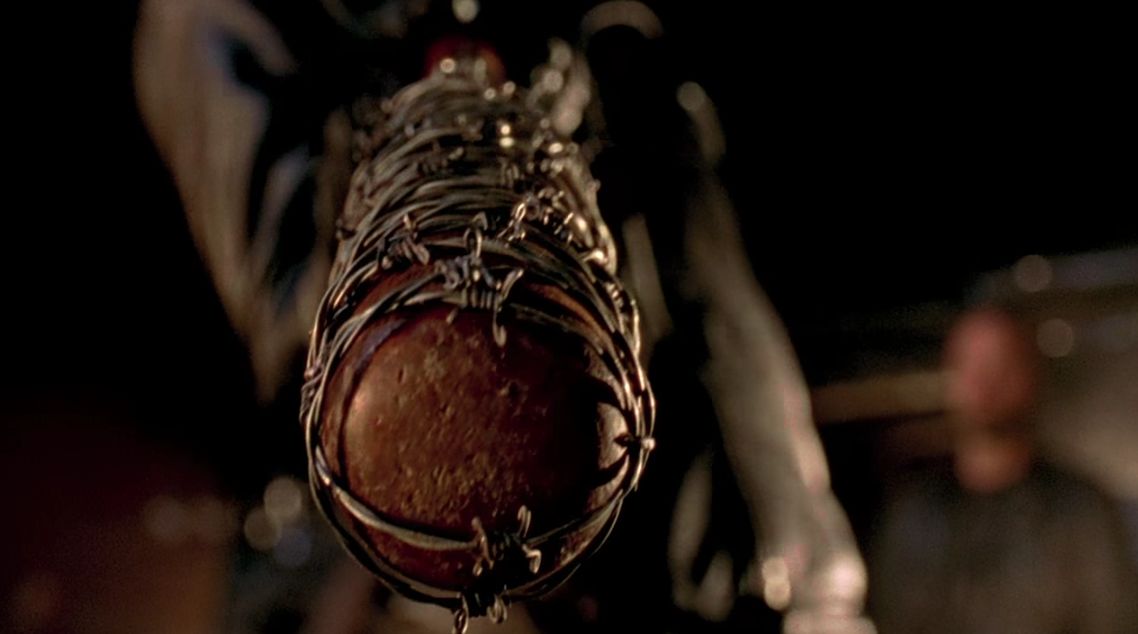